Bali Nine’s Renae Lawrence might be free for the first time in more than a decade but her past will continue to haunt her.

Lawrence was arrested in 2005 for drug smuggling and passed critical information about her co-accused to officials and was rewarded a shorter sentence.

Ringleaders Andrew Chan and Myuran Sukumaran, the only two not caught with heroin, were sentenced to death.

There are now concerns that she might face reprisals as her intelligence also led to several arrests of senior drug dealers in Australia. 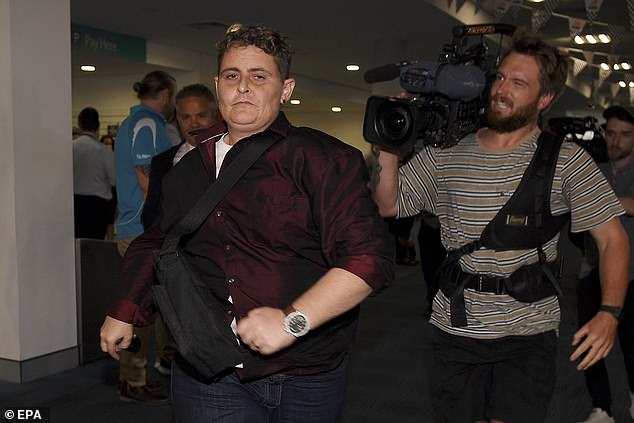 She is the only member of the notorious Bali Nine to walk free – two were executed, one died from cancer and five remain locked up for life (pictured at Newcastle Airport on Thursday)

Lawrence co-operated with Indonesian officials immediately after her 2005 arrest for smuggling 8.3 kilograms of heroin out of Indonesia.

She offered critical information to officials about the Bali Nine and named those involved in the drug plot.

Seven News reporter Chris Reason told 2GB radio that 50 Indonesian police escorted the convicted drug smuggler to the airport on Wednesday evening – for her own protection.

About a dozen of the officers were armed with weaponry, body armour and full-face masks.

‘A very high contact in one of the ministries said: ”We just want to see her get out of here alive. What happens in Australia is not our problem”,’ Mr Reason said.

‘If she hadn’t given that intel, theoretically, Andrew Chan wouldn’t have been convicted in Indonesia and faced the death squad.’

Mr Reason believes that Lawrence will be forced to look over her shoulder for the rest of her life.

‘She’s felt that threat and fear for some time. Some of these guys are now out of prison, the ones who were imprisoned in Australia as a result of the Bali Nine operation,’ he said. 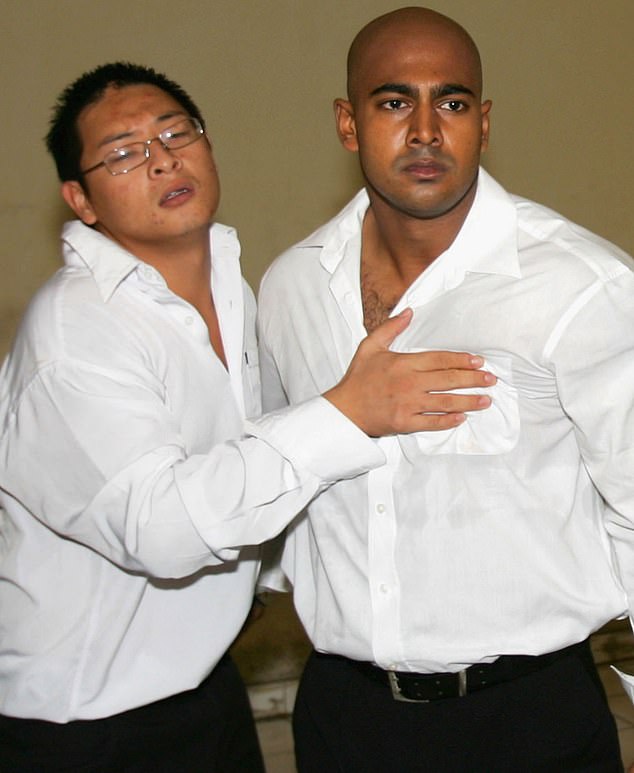 Lawrence co-operated with Indonesian officials after her arrest while ringleaders Andrew Chan (left) and Myuran Sukumaran (right), who were eventually executed, denied wrongdoing 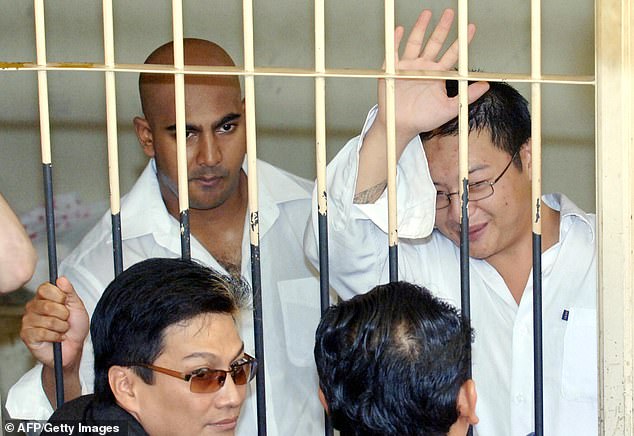 ‘If she hadn’t given that intel, theoretically, Andrew Chan wouldn’t have been convicted in Indonesia and faced the death squad,’ Seven News reporter Chris Reason told 2GB radio

The convicted drug mule served 13 years and seven months in prison in Indonesia.

Originally handed a life sentence, Lawrence was given a shorter sentence of 20 years for her honesty before receiving numerous reductions for ‘good behaviour’.

She is the only member of the notorious Bali Nine to walk free.

Lawrence touched down in Brisbane on Thursday morning where she caught another flight to her hometown Newcastle, New South Wales.

After her release from Bali’s Bangli Prison on Wednesday, Lawrence was deported and banned from re-entering Indonesia. 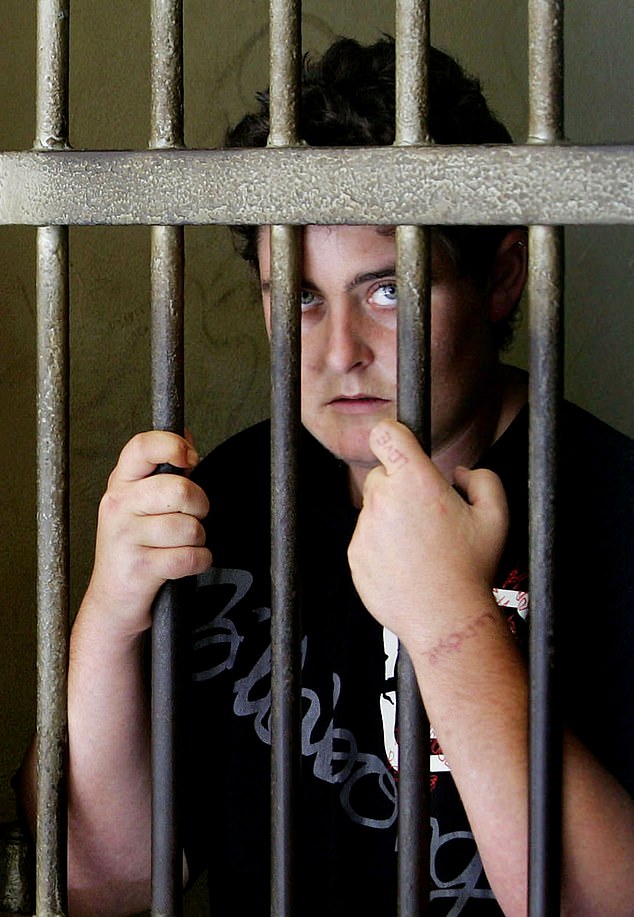 Renae Lawrence, pictured a week after her arrest in 2005, has outstanding criminal offences awaiting her arrival in Australia 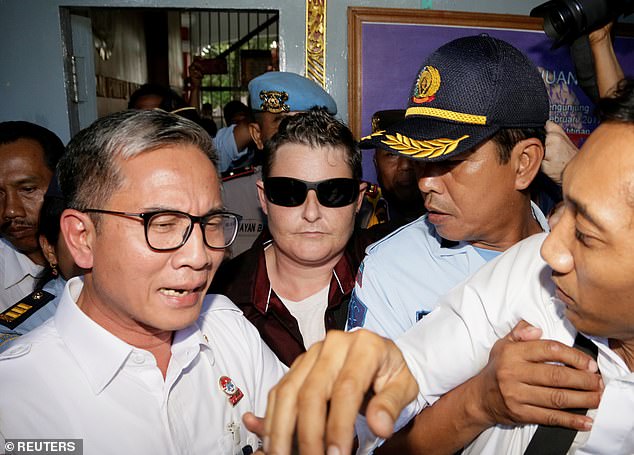 The taste of freedom could be short lived as NSW Police have two arrest warrants for Lawrence which have been outstanding since 2005.

One warrant alleges she was involved in a high-speed chase in a stolen car with fellow Bali Nine member Matthew Norman.

On Wednesday, Australian Home Affairs Minister Peter Dutton said he has ‘no sympathy’ for Lawerence, and suggested she face the full extent of the law.

‘If you commit that kind of offence, there is a heavy penalty to pay, and it doesn’t give you credit when you get back to Australia,’ he told Sky News.

But NSW Police Commissioner Mick Fuller suggested a deal with Lawrence’s lawyers was more likely than a fresh set of handcuffs on the tarmac. 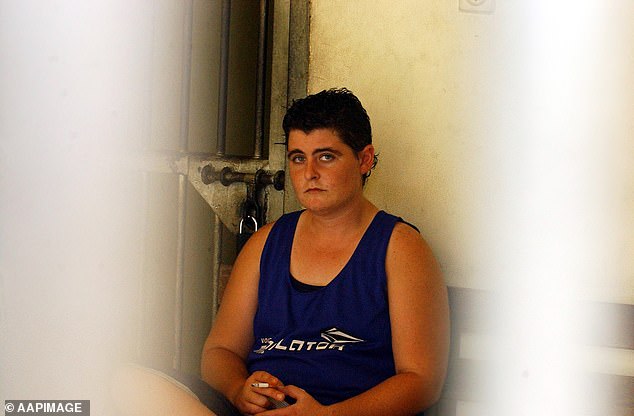 Renae Lawrence (pictured) days after her arrest in Bali on April 17, 2005 – she was released from jail on Wednesday

Daily Mail Australia understands Lawrence will be given a few days to ‘settle in’ at her Newcastle home before she responds to the outstanding police charges from over a decade ago.

Ringleaders Andrew Chan and Myuran Sukumaran were executed in 2015 and Tan Duc Thahn Nguyen died of stomach cancer in May earlier this year.