Fears for the marriage of cyclist Victoria Pendleton

Is Olympic cyclist Victoria Pendleton still pedalling in the same direction as her husband, Scott Gardner?

The couple have not been seen in public together since last summer and double-gold medallist Victoria, 37, cut a lonely figure at Cheltenham Festival last week.

Yesterday, her spokesman declined to comment on rumours her marriage had hit the rocks.

But she admitted last December: ‘I’m probably having a midlife crisis, for sure.’

Her remarks came as she confessed that Gardner, 42, the former Team GB sports scientist, would prefer her not to embark on her planned ascent of Mount Everest in May with handsome adventurer Ben Fogle, 44.

‘I think, in an ideal world, he’d like to be able to stop me, but he knows that won’t make me happy,’ said Victoria, who shares a converted Oxfordshire barn with Scott.

If there is trouble in their marriage, it could be the curse of Hello! striking. The couple (left) sold the rights to their wedding to the glossy magazine in 2013.

When her relationship with the Australian began, Victoria said it turned her into an ‘outcast’ among her cycling team mates because he was their coach at the time.

And in 2015, she said she would not rule out freezing her eggs to have children later in life. ‘Scott and I are both so ambitious with what we want to do with our lives at the moment that kids aren’t in the picture now.’

Donald Trump has so far seen off all the women who accused him of sexual assault, but he has met his match in Selina Scott.

Her ITV documentary, Trump: An American Dream, is to be broadcast by Netflix around the world on March 30, after the President failed to stop it being aired. Trump, 71, had warned he would sue ITV as well as Selina, 66, if it tried to sell her 1995 film to one of the U.S. networks.

The show, which exposes Trump’s boastful claims, so angered him that he engaged in a ten-year feud with Selina.

She had to threaten him with legal action, naming him as a stalker, before he desisted.

Late Radio 2 presenter David Jacobs and what he described as ‘our kind of music’ are much missed by listeners, but his turn of phrase lives on with his granddaughter, Saskia Gregson-Williams.

The 20-year-old is a healthy-living writer and her blog, Naturally Sassy, is attracting almost as much attention as those of better known foodies such as ‘Deliciously Ella’ Mills. 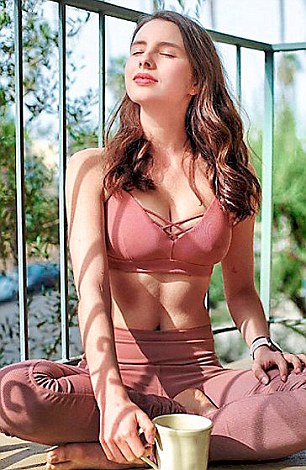 Juke Box Jury host Jacobs came up with her blog’s name. ‘He was one of the biggest inspirations for starting,’ says Saskia, whose blog was also turned into a recipe book.

‘The thing he liked most was my caramel and chocolate ganache. He used to have a stash on his dresser.’

Glossy-haired Sassy grew up in Hampshire with her parents, the composer Rupert Gregson-Williams and former actress Emma Jacobs. She turned her back on professional ballet to become a food writer and has already garnered almost 70,000 followers on Instagram, where she posts videos of dance-inspired workouts — which she calls Ballet Blasts — interspersed with healthy meal ideas.

But can Riley stop effervescent Sassy from bubbling over? Even her assistant suggested cutting the number of exclamation marks in her cookbook. Sassy explains: ‘She said: “It sounds like you’re speaking in a really high-pitched voice all the time.” A typically cringe-making tribute by Sarah, Duchess of York to Princess Eugenie, who turned 28 yesterday.

‘Ooh, the joy you bring to all our lives,’ Fergie gushed online. ‘Thank you and happy birthday my darling Eugie Boogie.’ 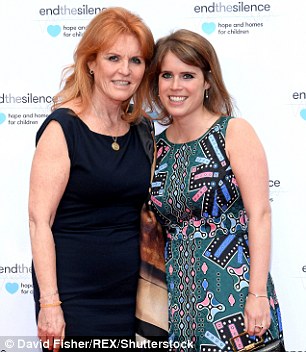 Sarah, Duchess of York to Princess Eugenie took to Instragram to wish her daughter a happy birthday

If you’re a married royal, where should you go to conduct rendezvous with glamorous members of the opposite sex?

In the case of the Queen’s eldest grandchild Peter Phillips, the answer is most surprising.

Princess Anne’s 40-year-old son, who has been married to Canada-born Autumn since 2008, chose the most prominent table at the Thomas Cubitt gastro-pub near Buckingham Palace on Wednesday evening.

His dinner with the attractive brunette, who seemed to hang on his every word, lasted until around 10pm. Naturally, I am far too discreet to disclose any of their conversation…

Coldplay’s Chris Martin, who in 2014 ‘consciously uncoupled’ from Hollywood’s Gwyneth Paltrow, is in harmony with Fifty Shades Of Grey star Dakota Johnson.

Indeed, their budding romance is due to hit new highs as Martin, 41, could soon be singing with Dakota, 28-year-old daughter of the U.S. actors Melanie Griffith and Don Johnson. Dakota’s aunt Tracy Griffith tells me she hopes to hear the pair perform at the Shindig music festival in Alabama this summer.

‘Dakota can sing, too. She sang at my wedding and she’s great. It could be a duet.’ The new Sonny & Cher?

Actresses often complain that roles dry up when they hit 40, but Dame Maggie Smith is still coining it in at 83.

Accounts for the company through which she channels her earnings disclose a net worth of £4.7 million, up from £3.8 million in 2016.

Interestingly, she has changed the name of the business, Maggie Smith Productions, to Dame Margaret Cross Productions, in honour of her second husband, playwright Beverley Cross, who died in 1998.