Fears of a coronavirus second wave in South Korea

Concerns have been raised over a possible second wave of coronavirus in South Korea as the R rate rises to 1.8 in the Seoul area.

The country’s top infectious disease expert is worried about the speed of virus transmissions in the densely populated capital area, where around 30 to 50 new infections have been reported each day since late May.

Jung Eun-kyeong, director of the Korea Centers for Disease Control and Prevention, says the average infectiousness of virus carriers in the Seoul metropolitan area – where half of South Korea’s 51 million people live – was about three times higher than in the rest of the country.

She said the basic reproduction number of virus carriers – which measures the number of infections caused by an individual – in the capital area reached as high as 1.7 or 1.8 in recent weeks. Any number above 1 indicates a growing epidemic.

This graph shows the number of new coronavirus cases per day in South Korea. The numbers recently have started to creep back up 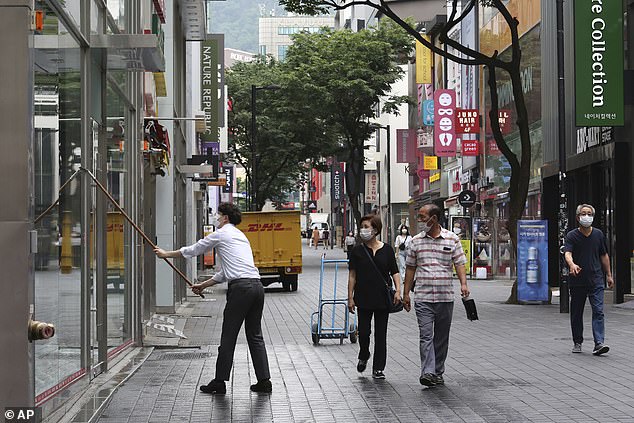 There are fresh fears of a second wave of coronavirus in South Korea as it emerged that the R rate has risen to 1.8 in the Seoul area (pictured)

She pleaded with Seoul residents to stay home over the weekend, saying there was ‘high concern’ that increased public activity would lead to a massive circulation of the virus.

But the new cases have prompted health authorities to warn that action must be taken now to stop a second wave.

‘Considering the quick transmission of Covid-19, there’s limits to what we can do with contact tracing alone to slow the spread,’ said Yoon Taeho, a senior Health Ministry official during a virus briefing.

Despite the concerns over the spike in infections, government officials have so far resisted calls to reimpose stronger social distancing guidelines after they were relaxed in April, citing concerns over hurting a fragile economy. 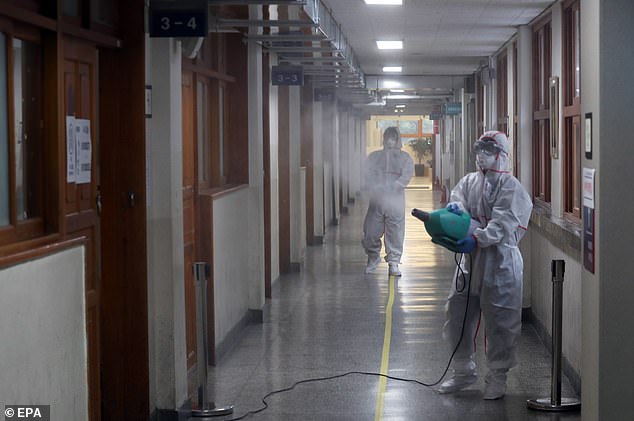 Health workers sterilize classrooms at a school in Seoul, South Korea, today. Experts are worried about a second wave of coronavirus

Their stance seems in contrast with the urgency conveyed by health experts. Kwon Jun-wook, director of the National Institute of Health, acknowledged that health authorities were only managing to ‘chase transmissions after belatedly discovering them’.

While South Korea saw a much larger surge of infections in February and March, when hundreds of new cases were reported every day, those had been easier to track. The majority then were concentrated in a single church congregation in Daegu, South Korea’s fourth-largest city with 2.5 million people.

The recent clusters have popped up just about everywhere around the capital.

At least 146 cases have been linked to workers at a large warehouse operated by local e-commerce giant Coupang, which has been accused of failing to implement preventive measures. 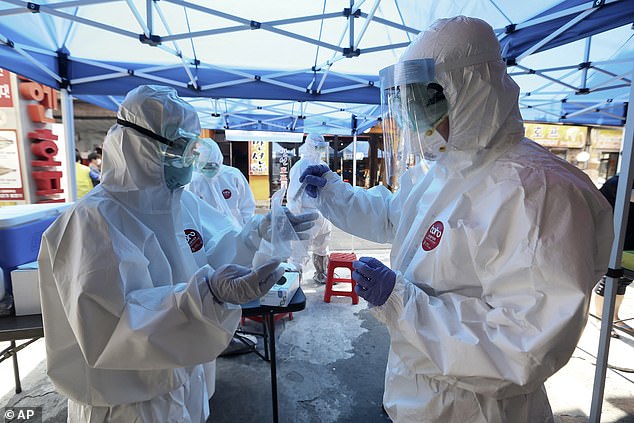 Around 200 cases were linked to nightclubs and other entertainment venues, while more than 90 infections have been traced to church gatherings near Seoul.

At least 116 cases have been linked to door-to-door sellers hired by Richway, a health product provider. These cases are particularly worrisome because most of the sellers are in their sixties and seventies.

South Korea’s total cases now number 11,947, including 276 deaths. Most people have recovered, but the number of active cases rose back above 1,000 this week after dropping below the mark in mid-May.

The spike in infections in the capital area has inspired second-guessing on whether officials were too quick to ease social-distancing measures.

The government in mid-April decided to lift administrative orders that advised entertainment and sports venues to close, allow professional sports to return to action without spectators and green-light a phased reopening of schools.

But Seoul and nearby cities restored some of the controls in recent weeks by shutting thousands of nightclubs, hostess bars and karaoke rooms. Resisting criticism from privacy advocates, officials have also started requiring entertainment venues, gyms and concert halls to register their customers with smartphone QR codes so they could be easily located when needed.