Fears of blackouts this week were sparked by low winds, NOT the World Cup match, experts say

Fears of an electricity blackout this week were sparked by low winds and not the England and Wales World Cup match, experts have said.

The National Grid yesterday called off a plan to activate an emergency initiative to pay consumers to use less energy at peak times to help ration energy supplies.

The electricity system operator had earlier suggested it was ready to start tonight when millions watch the World Cup game between England and Wales amid fears that fans gathering around TV screens would lead to a surge in demand.

But analysts say a forecast of lower temperatures, leading to less wind power generation and imports from France, was responsible for causing fears over low margins between supply and demand, The Times reports.

The heavily anticipated clash between England and Wales this evening is not believed to have been a factor behind the concerns.

Instead, experts believe it would have helped to reduce demand, with many football fans congregating in groups to watch on a single screen and avoiding the use of ovens, washing machines and kettles at home.

The utility company is planning a first ever live run of its Demand Flexibility Service from tomorrow.

The National Grid says the new scheme to reward households for cutting consumption at peak times is vital to stave off the risk of power cuts in the future.

Other measures include requiring manufacturers to shut down temporarily and turning down the voltage in the grid, dimming the nation’s lights in ‘brownouts’.

Russia’s invasion of Ukraine and the interruption of gas supplies have highlighted the fragility of power supplies.

While Britain gets relatively little gas directly from Russia, it has become reliant on wind farms as well as imports of gas and electricity, particularly from France and Norway.

Last year wind accounted for more than 20 per cent of the country’s electricity generation mix. At the same time, electricity imports via a cable under the Channel from nuclear power stations in France are below expectations.

A number of UK coal-fired power stations have been kept online to help make up for gaps in supply but this is at odds with commitments made at the Cop26 conference last year.

In effect it pays households to reduce their electricity at periods of peak demand when supplies are tight. Households must sign up and have a smart meter to get payments.

Only a few power firms are so far involved, but the UK’s third largest, OVO Energy, will announce today it is joining a scheme trial from December 8 to March 31. 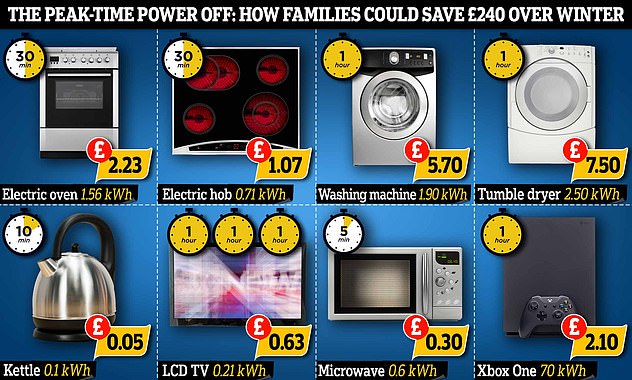 The National Grid is encouraging homeowners to take part in the scheme in a bid to avoid potential blackouts. Earlier energy company Octopus suggested its customers could save as much as £240

This will involve sending email alerts to 15,000 customers, encouraging them to shift their non-essential electricity usage – such as running the washing machine and dishwasher – outside peak periods of high demand.

Customers can make a minimum of £1 for every kilowatt-hour shifted below their personal household target.

To date, Octopus Energy has been the most active supplier participating in the Demand Flexibility Service.

It released data showing its customers had helped reduce demand by more than 100 megawatts during two tests – equivalent to the amount one small power plant produces.

The National Grid ESO gave no details about why electricity supplies were ‘tight’ this week.

Asked whether a shortfall of nuclear power imports from France had been covered by more coal-fired electricity, it said: ‘We wouldn’t be able to comment on specifics, but effectively yes, our operational outlook improved between 10am and 2.30pm to the level that we no longer needed the Demand Flexibility Service.’

Supplies for the rest of the week are expected to meet demand.