In the span of just 24 hours this week, a series of powerful earthquakes rocked several locations along the Pacific one by one this week, all in a seismic region known as the ‘Ring of Fire’ – and experts say they can’t rule out California being next.

Roughly 90 percent of the world’s earthquakes occur in this belt, which loops from New Zealand to Chile, passing through the coasts of Asia and the Americas on the way.

Now, after a 6.1 magnitude earthquake hit New Zealand on Wednesday followed by temblors off the coasts of Japan (6.1), Vanuatu (6.4), and Indonesia (5.7) early Thursday morning, others in its path – including California – are wondering if they could be next.

After a 6.1 magnitude earthquake hit New Zealand on Wednesday followed by temblors off the coasts of Japan (6.1), Vanuatu (6.4), and Indonesia (5.7) early Thursday morning, others along the Ring of Fire – including California – are wondering if they could be next. But, experts say offshore quakes happen in the region all the time, and go unnoticed

Experts say the series of earthquakes could have been caused by seismic waves travelling along fault lines and triggering ruptures in the Ring of Fire, also known as the Circum-Pacific belt.

But, this doesn’t necessarily mean California or other areas of the West Coast will be affected by the events.

According to Dr. Christopher Pluhar, a professor of Geology at Fresno State, the plates in this seismic region are in constant motion, at a rate of 1-10 centimeters per year.

While this can cause earthquakes, they often go unnoticed.

‘All of the time, it’s happening and there’s no damage. So we don’t notice,’ Pluhar told KMPH.

‘Earthquakes happen. We should expect them.’

Pluhar says there’s roughly a 60 percent chance California will see a strong earthquake in the next 30 years, most likely in the East Bay, along the Hayward fault.

Scientists say the major earthquake that struck close to home in Mexico this week, killing more than 230 people, was not connected to the other events despite the country’s location within the Ring. 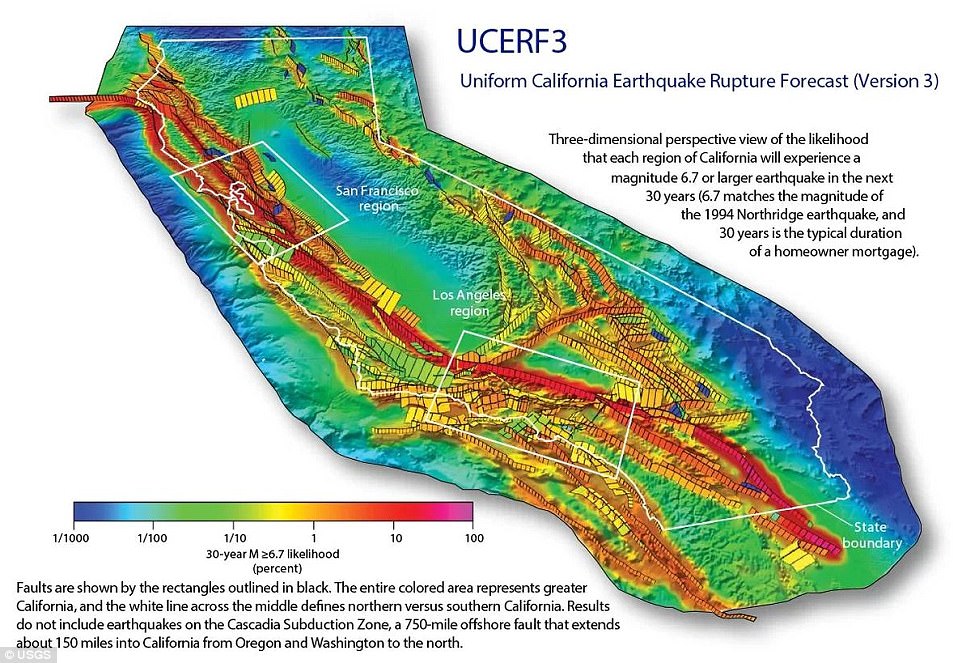 While experts have long warned that a major quake in California is inevitable, the state’s tectonic activity is different from that seen off the shore of Mexico and other regions along the Ring of Fire, explains Caltech seismologist Jean-Paul Ampuero, in an op-ed for CNN.

The plates that make up the different portions of the Ring of Fire rub against each other vertically. 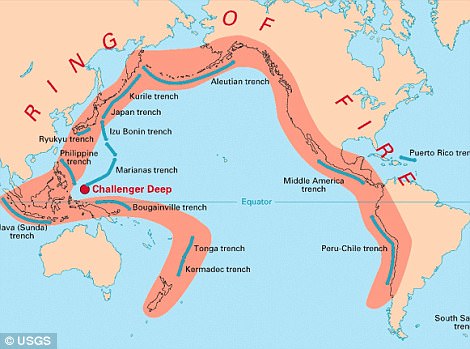 California’s tectonic activity is different from that seen off the shore of Mexico and other regions along the Ring of Fire, explains Caltech seismologist Jean-Paul Ampuero

California, on the other hand, sits between two plates that rub each other horizontally.

Seismologists admitted the cluster of quakes seen this week, along with others near Tonga (5.0), Taiwan (5.3), and Papua New Guinea (5.2), on the same day was ‘unusual’.

‘It is unusual, there’s no doubt about that, it’s been really busy,’ University of Melbourne’s Gary Gibson told Daily Mail Australia.

‘I must say these unusual clusters happen fairly often and it seems they are not totally random, we just don’t know why.’

A 6.1 magnitude earthquake struck overnight off the coast of Japan

A similar earthquake back in 2011 killed 15,894 people and injured 10 more when a tsunami, landslides and fires broke out as a result. But experts are predicting today’s quake should pass by without causing any harm

CALIFORNIA PLANS FOR ‘THE BIG ONE’

Federal, state and military officials have been working together to draft plans to be followed when the ‘Big One’ happens.

These contingency plans reflect deep anxiety about the potential gravity of the looming disaster: upward of 14,000 people dead in the worst-case scenarios, 30,000 injured, thousands left homeless and the region’s economy setback for years, if not decades.

As a response, what planners envision is a deployment of civilian and military personnel and equipment that would eclipse the response to any natural disaster that has occurred so far in the US.

There would be waves of cargo planes, helicopters and ships, as well as tens of thousands of soldiers, emergency officials, mortuary teams, police officers, firefighters, engineers, medical personnel and other specialists. 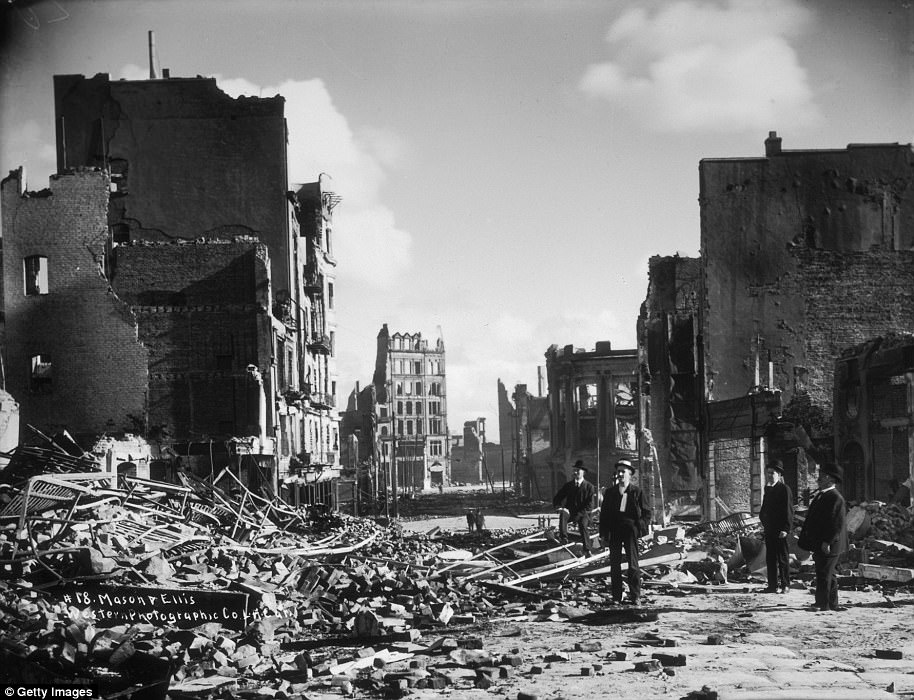 Phil Cummins at Geoscience Australia and the Australian National University suggested seismic waves cascading along fault lines could be responsible.

He said waves could also jump between nearby fault lines and continue moving, triggering imminent earthquakes at rupture points.

‘The waves that are excited by the earthquakes might rattle or disturb some distant faults that are close to rupture already,’ he said. 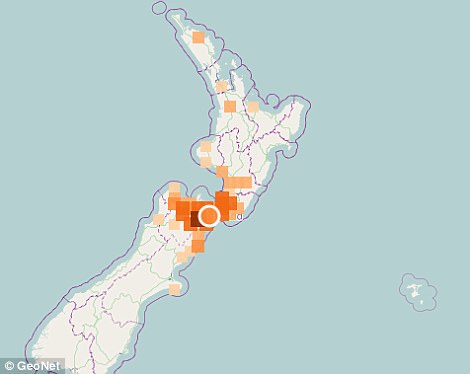 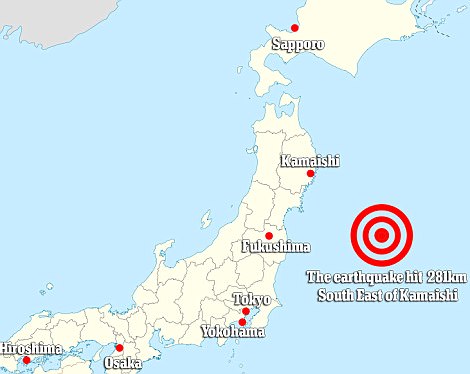 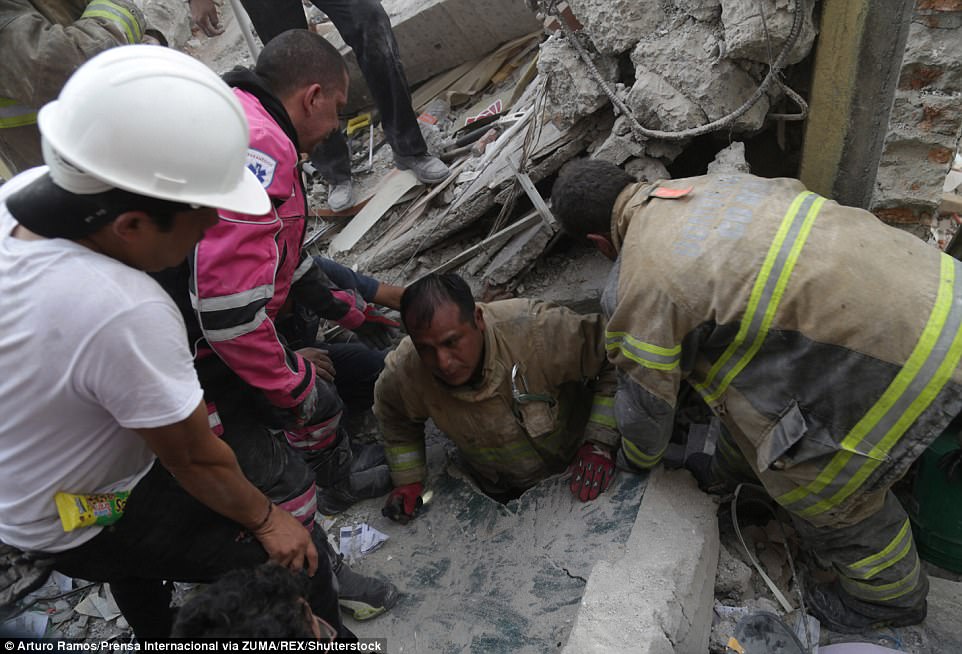 Professor Cummins said seismic waves couldn’t create earthquakes by themselves, but could bring forward ones already about to happen.

Locals living near Mount Agung volcano in Bali were seen evacuating their homes following a 5.7 magnitude earthquake nearby

Vanuatu, which has a population of 270,000, is made up of 80 nations scattered across 1,300 kilometres of ocean and experienced a 6.4 magnitude earthquake early on Wednesday

‘These are earthquakes that would almost certainly have happened very soon,’ he said.

Like Mr Gibson, he said earthquakes seemed to cluster in time but there was well-established explanation why, only theoretical possibilities.

CALIFORNIA AT RISK OF DEVASTATING MEGAQUAKE

A report from the U.S. Geological Survey has warned the risk of ‘the big one’ hitting California has increased dramatically.

Researchers analysed the latest data from the state’s complex system of active geological faults, as well as new methods for translating these data into earthquake likelihoods.

The estimate for the likelihood that California will experience a magnitude 8 or larger earthquake in the next 30 years has increased from about 4.7% to about 7.0%, they say.

‘We are fortunate that seismic activity in California has been relatively low over the past century,’ said Tom Jordan, Director of the Southern California Earthquake Center and a co-author of the study.

‘But we know that tectonic forces are continually tightening the springs of the San Andreas fault system, making big quakes inevitable.’

Professor Cummins also couldn’t rule out the same mechanism could provoke another significant earthquake in coming hours or days.

Mexico was devastated by a 7.1 magnitude, killing more than 230 people and leaving hundreds more trapped underneath collapsed buildings 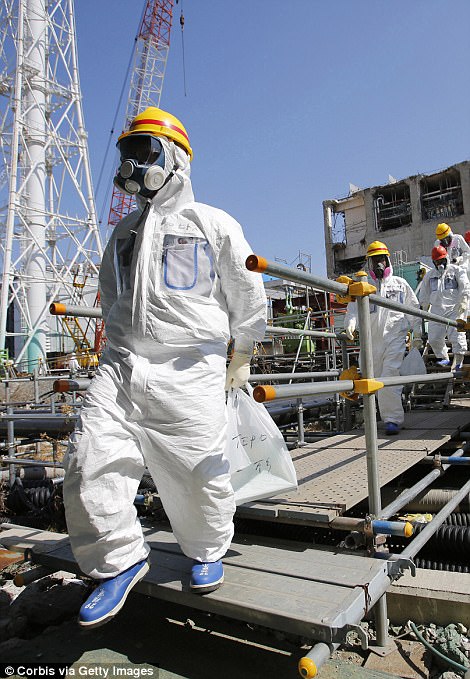 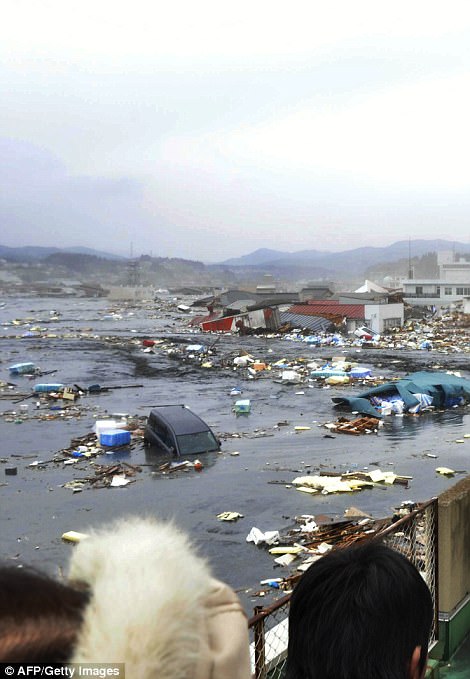 A similar earthquake back in 2011 killed 15,894 people and injured 10 more when a tsunami, landslides and fires broke out as a result. But experts are predicting today’s quake should pass by without causing any harm

However, both scientists ruled out any link to Wednesday’s twin earthquakes in Mexico, which killed more than 230 people as they were too far away.

Mr Gibson said the first Mexican earthquake could in theory have triggered the other by creating a stress field – but they would need to be at most 200km apart.

‘It is possible for earthquakes to affect a stress field and trigger more quakes, but those earthquakes would have had to be fairly imminent in the first place,’ he said. 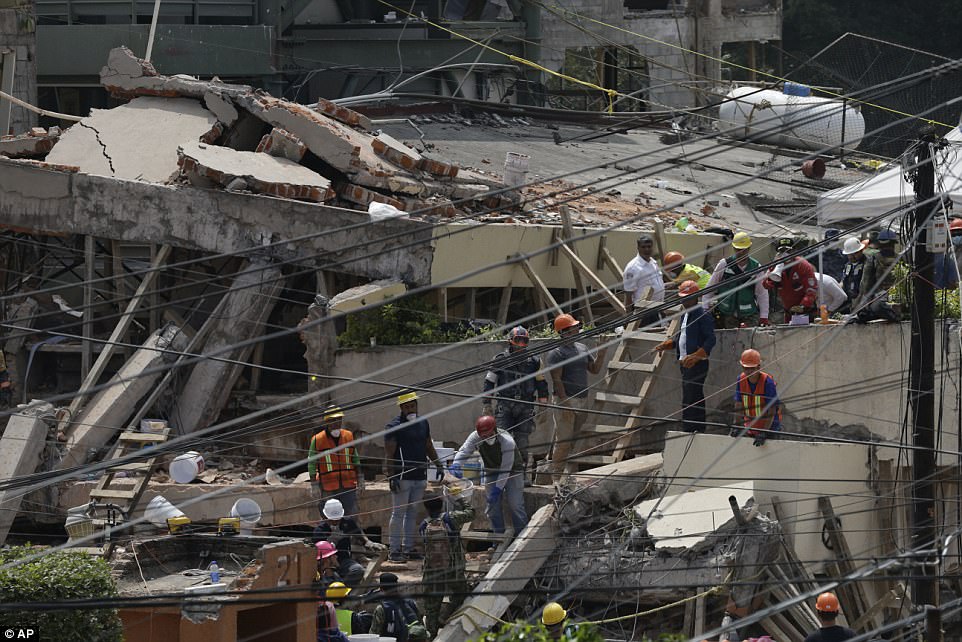 Mexico was devastated by a 7.1 magnitude, killing more than 230 people and leaving hundreds more trapped underneath collapsed buildings