Pret a Manger is set to cut jobs after a leaked video revealed a 85% plunge in sales at the sandwich and coffee change during the coronavirus lockdown.

Chief executive Pano Christou told staff on an online video call that an announcement regarding its current ‘job situation’ will be made on July 8.

He said weekly sales had fallen to just £3 million, just 15% of normal levels, despite reopening swathes of sites.

Chief executive Pano Christou (file photo) told staff on an online video call that an announcement regarding its current ‘job situation’ will be made on July 8.

Stores in the UK, France and US have been hit hard by the lockdown as office workers stay at home.

Last month, Pret A Manger confirmed that it hired advisers to help renegotiate rents in a bid to avoid store closures.

In the call, leaked to the BBC, Mr Christou said: ‘What will be the case is, on July 8, we’ll be doing a broader communication to the teams, just talking through the initial work that’s been done on this, so things will start to become clearer from July 8.’

The chain has reopened around 300 of its UK stores for takeaway and delivery customers, after shutting all of its sites in March.

During the call, its UK managing director Clare Clough said sales were ‘creeping up’ but are still around 86% lower in the UK.

She also said that the company is also engaging in ‘quite intense negotiations’ with more than 300 individual landlords.

A Pret spokeswoman said: ‘As we have already confirmed, at the end of May we appointed advisers to help Pret develop a comprehensive transformation plan to adapt to the new retail environment.

‘Transparency is very important in our business and we will make sure that Pret’s team members are the first to hear about any changes.

‘We will update our team members in early July once the plan has been finalised.’

It came as the former head of Wickes and Iceland warned that almost half of retailers are in danger of ‘going bust’. 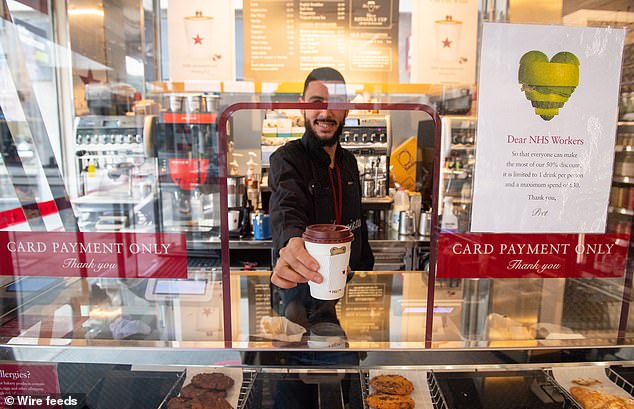 Retail expert Bill Grimsey said nearly half of retailers were already in danger and increases in online shopping amid the coronavirus pandemic has sped up the process.

He said the ‘old high street is finished’ and town centres can only survive if the Government gives more powers to local authorities and people who have a ‘vested interest in their communities’.

Among its 27 recommendations are calls to replace ‘outdated’ business rates with a sales tax.

It also calls for unused properties to be forced back onto the market so they can be bought by community trusts to serve their neighbourhoods.

Mr Grimsey said: ‘Before the pandemic, 50% of businesses were in danger of going bust. Covid has accelerated and exposed the process of people ditching bricks-and-mortar retail and shopping online instead.

‘People are starting to think differently, when they come out of lockdown, their attitudes will change for the better, they will start to appreciate their local communities, breathing cleaner air and enjoying the wildlife.

‘They have realised there is a better life out there, built around those who have a vested interest in their communities and not by big distant investors, and I believe this has been highlighted by the pandemic.’

The team behind the Grimsey Review argued ‘only localism on steroids’ could revive failing high streets.

Which Prets have reopened to customers?