Fears that a Yellowstone supereruption is on the way are growing

Hidden beneath Yellowstone National Park in Wyoming is a supervolcano capable of blasting thousands of miles of rock and ash into the air.

While the supervolcano hasn’t erupted for 631,000 years, scientists have been working to understand the last eruption to predict when one will happen again.

Now, a spate of four mini-tremors in the area following a period of ‘rest’ has raised fears among the public that the supervolcano is about to blow.

The most recent quake came on March 11 when a 1.5 tremor shook the volcano just hours after a 1.8 quake was also detected nearby.

But experts claim this is a relatively quiet period for tremors in the area. Normally, there are 50 minor earthquakes around the volcano every week.

They say that concerns of an eruption in the area are unfounded, and the current resurgence in activity is nothing to be concerned about.

The Yellowstone supervolcano has been hit by four minor Earth tremors over the last week which have reached up to 1.8 on the Richter scale. As public concern grows experts warn the activity is normal for Yellowstone

Yellowstone is one of the most seismically active areas in the world and there are regular earthquakes detected in and around the supervolcano.

Tom Skilling, a meteorologist for WGN News, a local news site in Chicago, explains that is it normal for the volcano to have less active weeks.

He said: ‘Minor earthquakes occur in the Yellowstone area 50 or more times per week, but a major eruption is not expected in the foreseeable future.’

Despite experts trying to calm nerves, concerned citizens have taken to Twitter to voice their concern about a potential eruption.

Rygy said on the social media site: ‘Yellowstone’s gonna blow up and get us all.’

This latest spate of tremors follows a period in February where more than 200 small tremors detected were detected over a period of 10 days.

According to experts with the US Geological Survey, that swarm began on February 8 in a region roughly eight miles northeast of West Yellowstone, Montana – and increased dramatically in the days following.

Much like now, scientists said there’s no reason to worry. 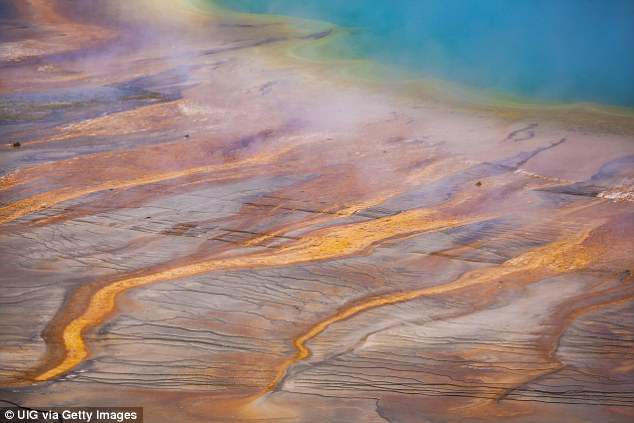 Yellowstone is home to several faults, and has a long history of seismic activity. As natural processes occur beneath the surface and ‘stress effects’ from past events continue to maintain their hold, the area remains a ‘hotbed of seismicity and swarm activity,’ according to USGS

Earthquakes are very common in the area and are likely caused by a combination of processes beneath the surface.

The current activity is said to be ‘relatively weak,’ and the alert level at the supervolcano remains at ‘normal.’

According to the USGS, the February swarm occurred in about the same location as the Maple Creek swarm last summer, which brought roughly 2,400 earthquakes in a four-month span.

The University of Utah Seismograph Stations picked up the quakes, counting more than 200 as of February 18.

‘The present swarm started on February 8, with a few events occurring per day,’ the USGS said at the time. 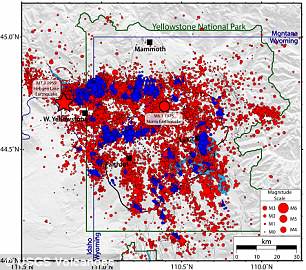 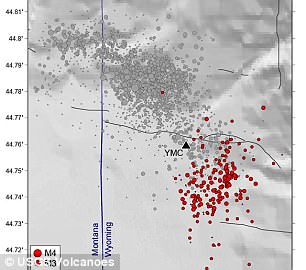 On left, a map of Yellowstone earthquakes from 1973 – 2017 is shown, with red circles illustrating all of the quakes. Blue shows quakes that were part of swarms. The February swarm is shown on the right (red circles), compared to the location of last summer’s swarm (Grey)

‘On February 15, seismicity rates and magnitudes increased markedly. As of the night of February 18, the largest earthquake in the swarm is M2.9, and none of the events have been felt. All are occurring about 8 km (5 miles) beneath the surface.’

Yellowstone is home to several faults, and has a long history of seismic activity.

As natural processes occur beneath the surface and ‘stress effects’ from past events continue to maintain their hold, the area remains a ‘hotbed of seismicity and swarm activity,’ according to USGS. 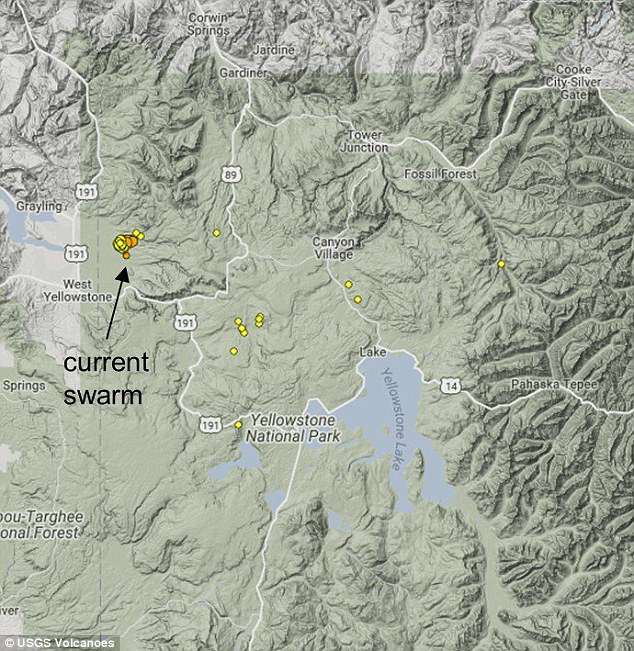 According to experts with the US Geological Survey, the latest swarm began on February 8 in a region roughly eight miles northeast of West Yellowstone, Montana – and increased dramatically in the days following

‘Swarms reflect changes in stress along small faults beneath the surface, and generally are caused by two processes: large-scale tectonic forces, and pressure changes beneath the surface due to accumulation and/or withdrawal of fluids (magma, water, and/or gas),’ USGS explains.

‘The area of the current swarm is subject to both processes.’

As the experts explain, earthquake swarms are a common phenomenon at Yellowstone, and account for more than 50 percent of seismic activity at the park.

COULD AN ERUPTION AT THE YELLOWSTONE SUPERVOLCANO BE PREVENTED?

Recent research found a small magma chamber, known as the upper-crustal magma reservoir, beneath the surface

Nasa believes drilling up to six miles (10km) down into the supervolcano beneath Yellowstone National Park to pump in water at high pressure could cool it.

Despite the fact that the mission would cost $3.46 billion (£2.63 billion), Nasa considers it ‘the most viable solution.’

Using the heat as a resource also poses an opportunity to pay for plan – it could be used to create a geothermal plant, which generates electric power at extremely competitive prices of around $0.10 (£0.08) per kWh.

But this method of subduing a supervolcano has the potential to backfire and trigger the supervolcanic eruption Nasa is trying to prevent.

‘Drilling into the top of the magma chamber ‘would be very risky;’ however, carefully drilling from the lower sides could work.

Even besides the potential devastating risks, the plan to cool Yellowstone with drilling is not simple.

Doing so would be an excruciatingly slow process that one happen at the rate of one metre a year, meaning it would take tens of thousands of years to cool it completely.

And still, there wouldn’t be a guarantee it would be successful for at least hundreds or possibly thousands of years.

And in the past, they have not been linked to volcanic activity.

‘While it may seem worrisome, the current seismicity is relatively weak and actually represents an opportunity to learn more about Yellowstone,’ USGS explains.

‘It is during periods of change when scientists can develop, test, and refine their models of how the Yellowstone volcanic system works.’

But, the experts also note: ‘The earthquakes, too, serve as a reminder of an underappreciated hazard at Yellowstone – that of strong earthquakes, which are the most likely event to cause damage in the region on the timescales of human lives.’