A woman who attended five funerals over four days could be the centre of a growing coronavirus cluster after four of her contacts tested positive.

The woman, in her 40s, attended the Catholic services in Sydney’s southwest last week and was diagnosed with coronavirus on Thursday – prompting health officials to issue a warning on Friday night.

The woman attended Our Lady of Mt Carmel Catholic Church at Mt Pritchard (pictured) for one hour on July 19 from 7:30am 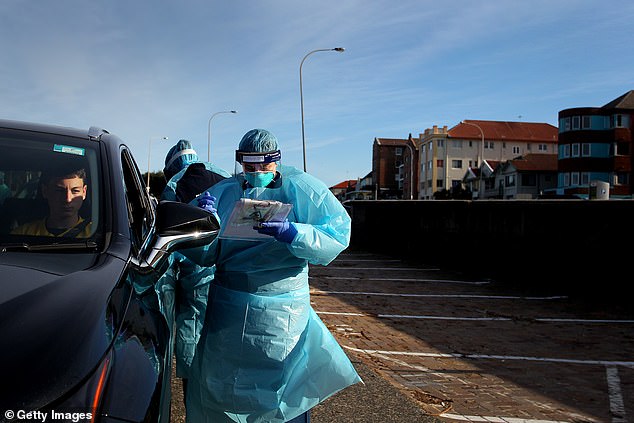 More than 30,000 tests were done in NSW in the 24 hours to 8pm Friday (pictured: Milly Brown, Assistant in Nursing conducts a COVID-19 swab test as large crowds queue at a Bondi Beach drive-through testing clinic on July 22, 2020 in Sydney)

Those who attended any of the same services as the woman have been told by NSW Health they need to self-isolate, even if they show no symptoms, and be tested for COVID-19.

Even if they return a negative result, attendees should continue to self-quarantine for the 14-days and be alert if symptoms develop later, officials said.

St Brendan’s Catholic Church at Bankstown for one hour on July 16 from 6:30pm

Ausia Funeral Services at Fairfield East on July 17 between 1:00pm and 8:00pm

Funeral service at St Brendan’s Catholic Church, Bankstown for one hour on July 18 from 10:00am

Burial service at St John of God Lawn at Rookwood Cemetery on July 18 between 11:30am and 1:00pm

Our Lady of Mt Carmel Catholic Church at Mt Pritchard for one hour on July 19 from 7:30am

The four positive results are among 15 new cases of coronavirus discovered from 30,535 tests done in NSW in the 24 hours to 8pm on Friday night.

Eight of the new cases have been connected to the Thai Rock restaurant in Sydney’s west and six are returned travellers who are in hotel quarantine, NSW Health said.

Another case in under investigation.

The 15 cases also have connections to three Catholic Schools in Sydney’s west, prompting them to be closed for deep cleaning on Friday.

The total number of confirmed cases in NSW now sits at 3465, with 51 of them deadly, and 60 cases linked to the Thai restaurant cluster in Wetherill Park. 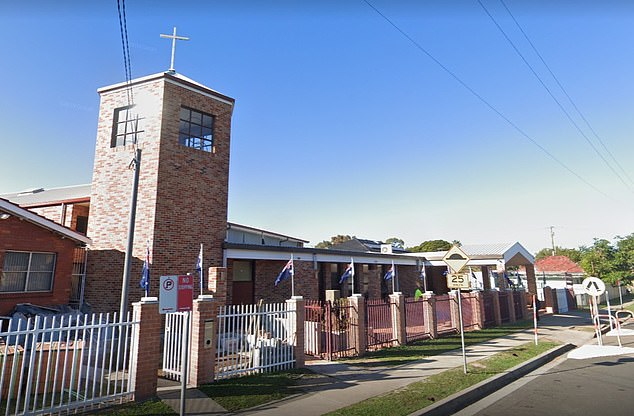 The woman also attended St Brendan’s Catholic Church at Bankstown (pictured) for one hour on July 16 from 6:30pm 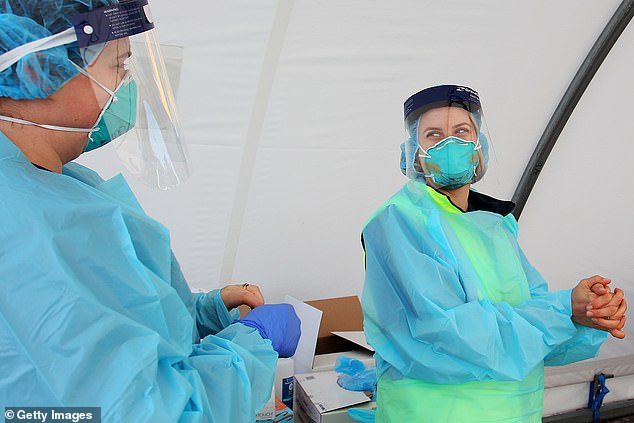 The growing number of cases in Sydney sparked a number of new restrictions.

New COVID-19 measures have come into effect for hospitality venues in a bid to curb the spread of the virus.

The changes include mandatory sign-ins, prepared COVID-safe plans, a cap of 300 people and maximum group bookings of ten.

Caps on private indoor and outdoor gatherings remain at 20, but weddings and corporate events are now capped at 150, and funerals and religious gatherings at 100. 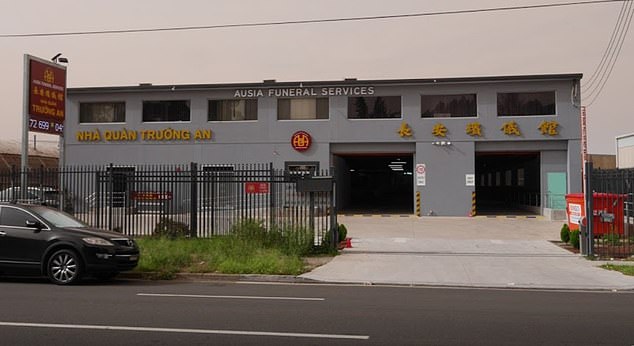 The woman was also at Ausia Funeral Services at Fairfield East (pictured) on July 17 between 1:00pm and 8:00pm