Fed up with the gloom holding back your portfolio on earth? Invest in space

During this summer of high anxiety about Planet Earth, space has become a focus of attention for investors.

What better time to explore technologies that sound like science fiction, but could solve terrestrial challenges, while providing a route to portfolio diversification?

The new James Webb Telescope, which gave us images of the beginnings of the universe, has reminded us of the wonders of space, a sector in which the UK has the world’s third-largest number of start-ups after the US and China.

A giant leap: An investment foray is a journey into the unknown

Next month, Richard Branson’s Virgin Orbit will launch commercial and military satellites from Spaceport Cornwall. The rocket bearing the satellites is to be carried on the wing of a modified Boeing 747, and then released into space.

You can be starry-eyed about this – like me – but remain objective. That is essential if you are venturing into this sector with its complexities. Goldman Sachs says that the global space economy could be worth $1trillion (£820billion) by 2040.

Morgan Stanley’s prediction is £1.16trillion, while Merrill Lynch expects £2.5trillion. The vast difference between these estimates underlines that an investment foray is a journey into the unknown.

But these forecasts also indicate the potential rewards, and the scale of the potential benefit to our planet. Mark Boggett, manager of the Seraphim Space Fund trust – which backs companies engaged in final frontier industries – is convinced that ‘space holds the answers to humanity’s problems, such as climate change’.

This hope is accompanied, however, by mounting concern over who controls the wealth of data space companies gather.

OneWeb, a British business, is a pioneer in the LEO (lower earth orbit) satellites used for purposes such as military reconnaissance and monitoring moisture levels in fields to aid plentiful harvests.

Despite a government bail-out in 2020, it requires funds to compete with Elon Musk’s SpaceX. A merger with Eutelsat has hit controversy, however, because of the Chinese Investment Corporation’s shareholding in the French firm.

One side-effect of the OneWeb row has been excitement around Seraphim, which made its debut a year ago. When I wrote about space at that time, shares in the trust stood at a 7 per cent premium to the value of its net assets. Today it is at a 22 per cent discount, largely as the result of the fall in the shares of two quoted holdings, encryption software specialist Arqit, a British business, and Spire Global, the weather forecaster.

Both merged with US-listed special purpose acquisition companies last year. The trust also owns Altitude Angel, part of a consortium proposing to build a 165-mile drone highway linking airspace above Reading (where it is based) with Oxford, Milton Keynes, Cambridge, Coventry and Rugby. This would remove traffic from roads.

Satellite Vu, a British business, seeks to be ‘the Earth’s thermometer in space’, measuring the temperature of any structure. This should aid energy efficiency, so lowering fuel bills and combating atmospheric warming. Other Seraphim holdings include D-Orbit, which Boggett says is the ‘Kwik Fit of space’, servicing spacecraft. Astroscale is ‘the RAC of space’ as it clears defunct satellite debris 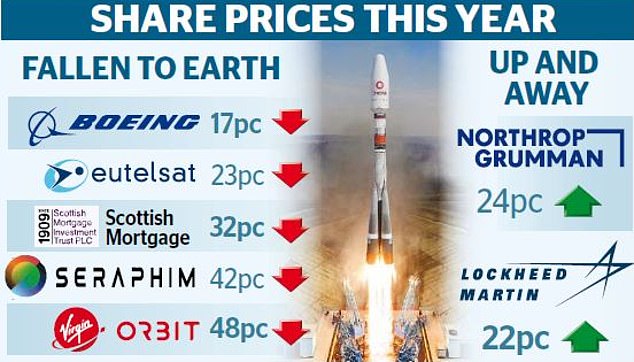 Some will regard Seraphim as the investment equivalent of the Wild West. But James Carthew of Quoted Data says the trust aims at adventurous bargain hunters.

The chance of adventure draws the super-rich to space. Jeff Bezos, founder of Amazon, and Bill Gates, founder of Microsoft are both backing space ventures.

Those with more modest resources could consider firms with a space division such as US giants Lockheed Martin, Northrop Grumman, or Boeing, which is developing pilotless flying taxis.

European aerospace giant Airbus boasts of being the largest space company in Europe, with a site in Stevenage in Hertfordshire. FTSE100 defence firm BAE Systems claims to be ‘at the forefront of space innovation’. Scottish Mortgage Trust’s bets on space include a £430m stake in SpaceX.

Such enterprises, although full of hazards, are less subject to inflation anxiety than more earth-bound enterprises. I’m on board – for this and the thrills!