The Federal Trade Commission has an open investigation into Facebook’s growing privacy scandal, it revealed Monday.

The regulator’s acting director, Tom Pahl, made the announcement in a statement which immediately send Facebook’s share price plunging.

He also raised the prospect of a massive fine for Mark Zuckerberg’s social network because it had entered into a consent decree in 2011 about the use of personal data and any breach of that can be punished by the regulator.

The move represents a huge blow to Facebook, which has been plunged into crisis by the disclosure that Cambridge Analytica harvested the personal data of 50 million American users which was then used by the Trump campaign before the 2016 election to micro-target advertising.

Shares in Facebook fell from an opening price of $160.82 to as low as $150.36 in th minutes after the announcement was made.

Under pressure: Mark Zuckerberg is now presiding over a full-scale crisis in Facebook with its stock price battered by the announcement of a Federal Trade Commission investigation 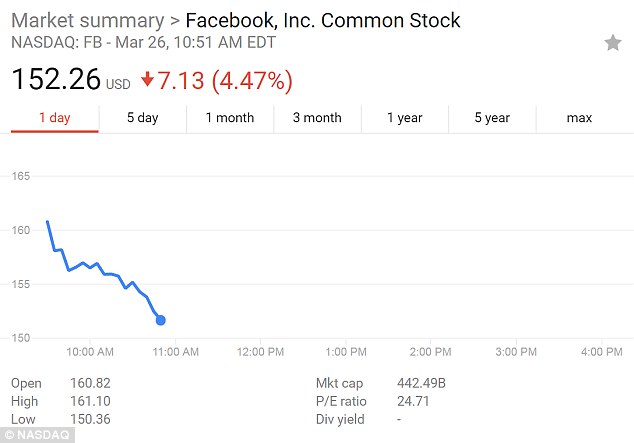 Battered: Facebook shares took a dive on the Nasdaq as the announcement of a privacy probe reverberated among traders