Feeling the effect of the campaign diet? Boris admits his weight has ‘gone up’

Boris Johnson admitted today that his weight has ballooned after hitting the Tory leadership campaign trail as he kicked off the latest party hustings.

The favourite to be the next prime minister draw a laugh as he made the admission to party members in Devon – as he also took a hardline stance against Vladimir Putin.

Mr Johnson shed the pounds at the start of the year as part of a very noticeable change in image, which he put down to cutting down on drinking.

But asked today to tell the audience in Exeter something they did not already know about him, Mr Johnson replied: ‘My weight.

Mr Johnson , a former foreign secretary said: ‘One of the things you discover in the Foreign Office is that every British prime minister and foreign secretary comes into office … thinking they can have a reset’ 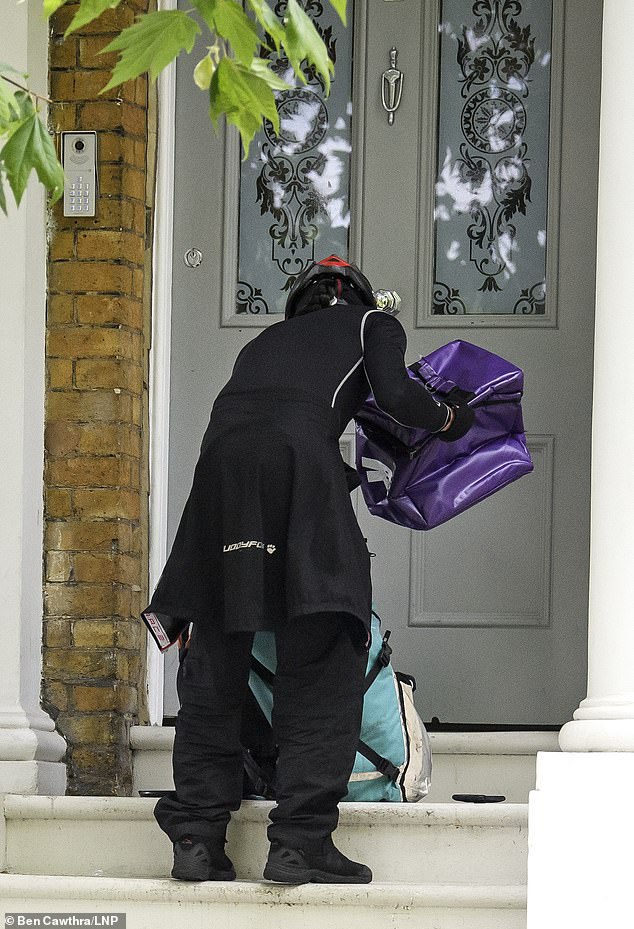 A fortnight ago junk food deliveries were seen being delivered to the London home Mr Johnson shares with partner Carrie Symonds, with two on one night as he kept a low profile 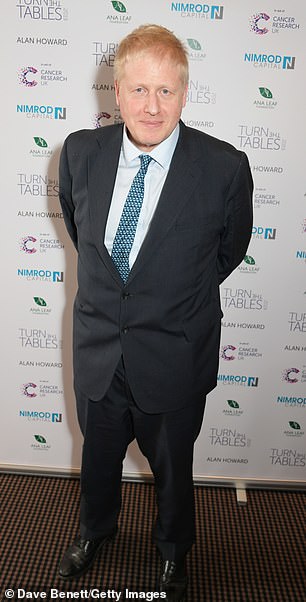 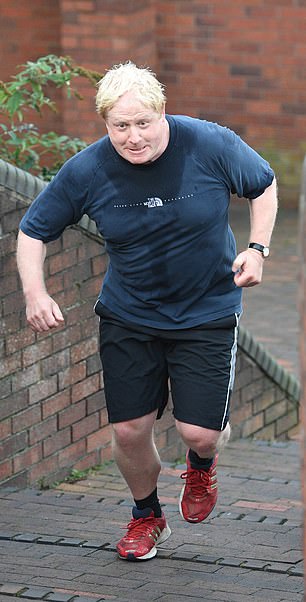 Makeover: Boris Johnson, 54, debuted a noticeably more polished look as he arrived at the Cancer Research UK fundraiser at the BAFTA headquarters in March (left) after becoming known for his floppy hairstyle and somewhat ‘slapdash’ appearance (right)

‘Are you frit?’ Johnson quizzed over lack of head-to-head debates with Jeremy Hunt

Mr Johnson was challenged by one member over ‘avoiding’ head-to-head debates with rival Jeremy Hunt.

A woman asked: ‘In the words of Mrs Thatcher, are you frit? And if you are frit, are you fit to be prime minister?’

He replied: ‘I don’t think anybody could have done as many hustings as I have done.

‘I think one of the important things is not to, as Conservatives… not to spend too much time tearing great lumps out of each other in advance of the end of the contest.’

Challenged by Mr Dale on his commitment to two head-to-heads, Mr Johnson replied: ‘Only? By your own admission I’m doing at least two head-to-head debates, which I think is probably more than enough to glut the appetite…’

After Theresa May met the autocratic leader in Osaka at the G20 conference he claimed all British leaders wanted to ‘normalise’ relations with Moscow when they entered office.

But at a hustings in Exeter, Devon, Mr Johnson used the example of last year’s poisoning of Sergei Skripal and his daughter Julia in Salisbury as an example of why it was important to keep a distance.

Asked by host Iain Dale about the meeting between Mrs May and Putin, he praised the UK’s ability to unite the world against Moscow following the attack, which left a Briton dead.

‘When it comes to something like the Skripal poisoning it’s very difficult to find any defence or excuse for their behaviour.’

He said Theresa May was ‘totally right’ to challenge Vladimir Putin over the Novichok poisonings in Salisbury. 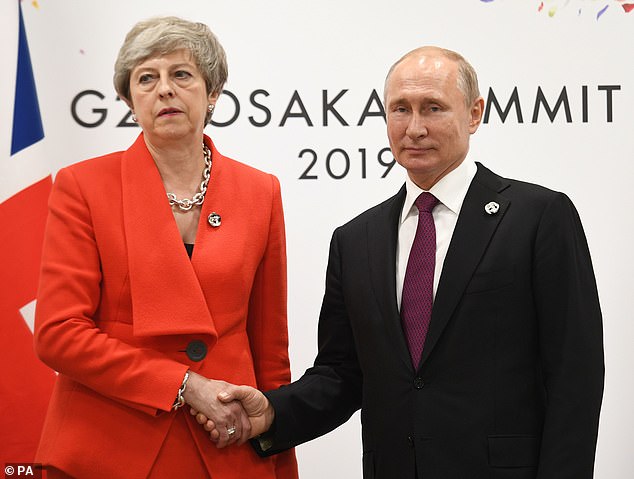 Cold front: Mrs May has a frosty reception with Vladimir Putin at the G20 in Osaka following the Salisbury poisoning

Theresa May greeted Vladimir Putin with the frostiest of handshakes as they met at the G20 in Japan in a meeting which had been soured before it had even begun by the Russian President’s attack on Western views on gay rights, immigration and multiculturalism.

Mr Putin had boasted prior to the showdown between the pair that liberalism in Europe and the US had ‘outlived its purpose’ and called the decision to allow millions of migrants into the EU a ‘cardinal mistake’.

Mrs May appeared to be indignant as she met Mr Putin and remained utterly stony-faced as they briefly shook hands with body language experts describing the Prime Minister’s demeanor as ‘funereal’.

The meeting was already due to be a tense affair after Mrs May vowed to confront Mr Putin over the Salisbury spy attack and demand that he hand over the suspects.

Mrs May told the Russian leader ‘there cannot be a normalisation of our bilateral relationship until Russia stops the irresponsible and destabilising activity’, Downing Street said after the meeting had finished.

Radio presenter Iain Dale welcomed attendees to the Exeter hustings, which kicked off shortly after 11am.

Drawing laughter, he told party members they were attending ‘the fourth semi-final of Tories Got Talent’.

Mr Johnson has earlier roped his dad Stanley into helping his Tory leadership campaign today ahead of the latest party hustings.

Mr Johnson senior, a former Euro MP, joined his son, 54, at the event in Exeter, Devon, which is not far from his Somerset home on Exmoor.

They posed for photographs outside the Sandy Park Conference Centre close to the city’s rugby stadium. 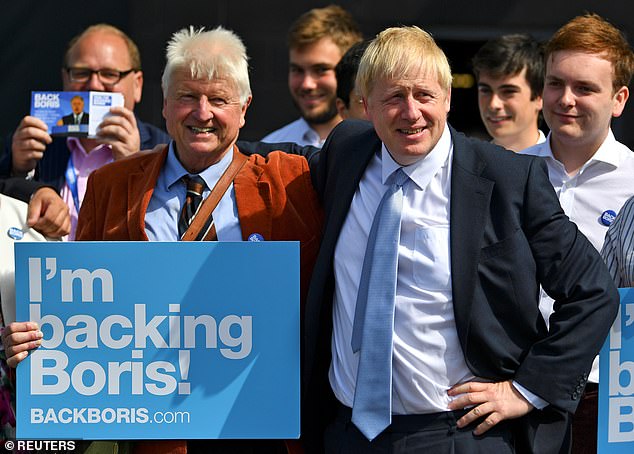 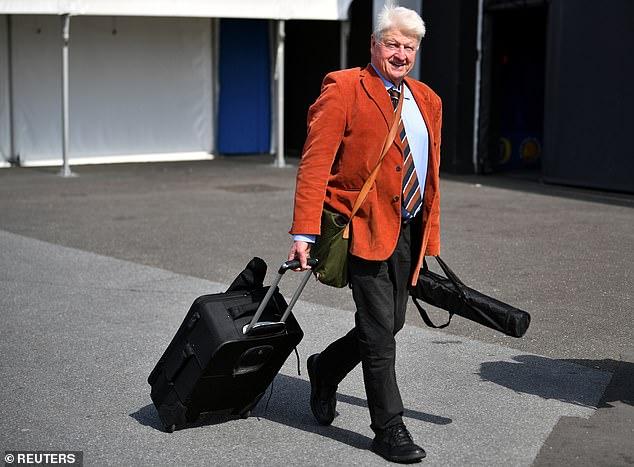 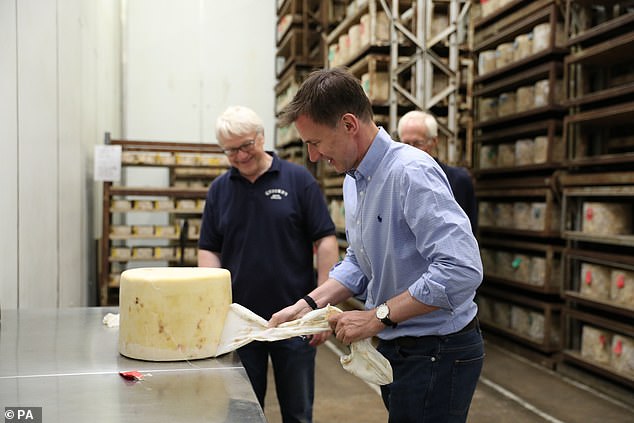 Later there was applause for Mr Johnson senior and also rival Jeremy Hunt’s sister and her children, who were also in the audience.

Supporters of both Conservative Party leader contenders, Boris Johnson and Jeremy Hunt, flanked the entrance to Sandy Park Conference Centre in Exeter ahead of the event.

Pro-Boris supporters were giving out blue ‘back Boris badges’ and those in favour of his rival were handing out leaflets explaining ‘Why it has to be Hunt’.

Journalists were told there will be standing-room only in the venue as all seats will be taken by party members.

Organisers said there were an estimated 800 people in the audience.