Feeling the pinch: Nearly 40 percent of Americans struggle to pay for basic necessities

Nearly 40 percent of Americans are having trouble financially meeting at least one of their families’ basic needs, including housing, groceries and paying utility bills, according to a new study.

The problem persists – even in middle class households – despite the national unemployment rate reaching a low 4.4 percent in 2017, according to an Urban Institute survey of more than 7,500 adults age 18-64.

In a survey of 7,500 adults, the Urban Institute identified the basic necessities that Americans are struggling to pay for

‘The results were a bit surprising considering the strength of the economy,’ he said. ‘We found that even in a mostly healthy economy there were a lot of families having trouble meeting basic needs for food, housing and health care.’

‘There are gaps in the safety net and some of the changes that are currently being considered to programs like Medicaid, SNAP (food assistance) and housing assistance programs have the potential to widen those gaps,’ Karpman said.

African Americans were nearly 20 percentage points more likely than white people to report struggling with one of the basic necessities, with more than half (54.5 percent) saying they had experienced such a hardship in the past year. Among Hispanics, 50.1 percent reported similar struggles.

The source and severity of the problem varies by household, Karpman said, but ultimately wage stagnation combined with growing costs for necessities is hitting many American families hard.

‘The data suggests that wages are not keeping up with essential household costs for a lot of people, so that’s probably a big part of the story,’ he said. ‘We found that it wasn’t just people who were out of work who were having trouble meeting basic needs.’

Unsurprisingly, poor families struggled the most, with more than 40 percent of those at or just above the federal poverty level experiencing food insecurity, while across all income levels that number was 23 percent.

Roughly a third of families with at least one employed adult in the household reported struggling to meet at least one basic need, according to the study.

‘For some people it may have to do with difficulty finding stable employment or stable work hours,’ Karpman continued. ‘For people with jobs, their wages may not be keeping up with essential costs like rent, child care and health care.’ 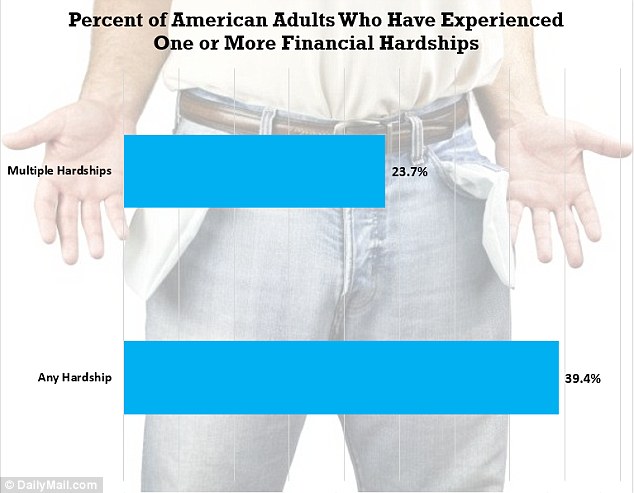 Nearly 40 percent of Americans are having trouble financially meeting at least one of their families’ basic needs, including housing, groceries and paying utility bills, while 23.7 percentage struggle with more than one of those responsibilities

Part of the problem is that the cost of health care has surpassed wage growth and inflation. The hardship is compounded by the fact that more employers are only offering health plans with high deductibles – often thousands of dollars – which can make treatment for an expensive health problem out of reach even for the insured.

Education is also a key indicator of financial health, Karpman said. Among Americans with less than a high school degree, 56 percent struggled to meet basic needs, compared to 24 percent of college graduates who reported similar challenges.

The day-to-day reality of average Americans found in the report is in stark contrast with the strong economy and low unemployment that President Donald Trump has touted as a measure of his success, but researchers at the Urban Institute said the financial pinch is very real.

Conducted in 2017, the study will be a benchmark to measure the level of hardship Americans experience going forward, and will give researchers and opportunity to understand how state and federal changes to welfare programs are affecting the poor.