Democrats get ready for war to wear masks: Senator Dianne Feinstein unveils plan to deny ALL coronavirus funding to states that don’t impose a mask mandate

California Democratic Sen. Dianne Feinstein announced Thursday that she planned to introduce an amendment to a Senate’s next coronavirus stimulus bill that would withhold funds from states that don’t mandate mask-wearing.

‘Wearing masks in public should be mandatory. Period,’ she said. ‘Leader McConnell said the Senate will take up the next coronavirus economic relief bill later this month. At that time, I intend to offer an amendment to prohibit sending funds to states that haven’t adopted a statewide mask requirement.’

Currently, 28 states plus the District of Columbia have mask mandates, meaning 22 do not.

California Democratic Sen. Dianne Feinstein announced Thursday she planned to propose an amendment to the next coronavirus stimulus bill that would prohibit funds from going to states that don’t mandate mask-wearing. Currently, 22 states lack state-wide orders 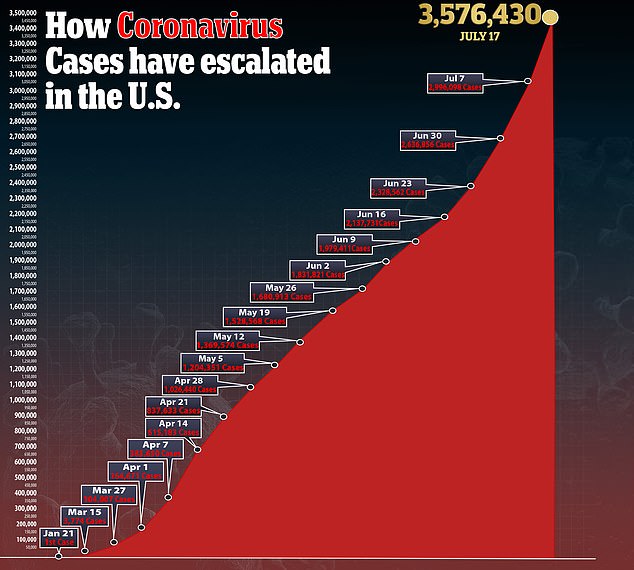 There are now 3.5 million U.S. cases of the coronavirus as of Friday. Sen. Dianne Feinstein wants federal help withheld from states that refuse to implement state-wide mask orders

Among the five states that USA Today reported saw the biggest spike in cases between Julu 6 and July 12 – Louisiana, Arizona, Idaho, Missouri and Florida – none of them have a state-wide mask mandate.

‘The situation is getting worse daily,’ warned the 87-year-old California Democrat, who is the Senate’s oldest member, which also makes her high-risk if she catches the virus.

‘This should be universal,’ she added.

She said she had hoped governors would step in and take action ‘but so far that hasn’t happened.’

One such leader, Republican Gov. Brian Kemp of Georgia, is actually suing the Democratic mayor of Atlanta, Keisha Lance Bottoms, over her decision to mandate masks.

Bottoms called the move ‘bizarre’ and accused Kemp of playing politics because he filed the lawsuit after President Trump visited the state Wednesday and the mayor accused the president of breaking the law when he didn’t wear a mask.

Trump has long been mask-averse, though wore a mask to Walter Reed Medical Center over the weekend to visit wounded troops.

He’s also shown no interest in a nationwide mask mandate to slow the spread of COVID-19.

‘It’s time for Congress to step in,’ offered Feinstein. ‘This is a matter of life or death and partisan politics shouldn’t play a role.’