President Donald Trump’s former associate Felix Sater has said the president wanted to talk about his secret dealings with the FBI and CIA on the campaign trail in 2016 to ‘boost his patriotic image’.

In an interview with the Skullduggery podcast, Sater – who formed a friendship with Trump in the 2000s – said the president approached him and asked whether he could tell the story of how the Russian-connected associate worked as an informant.

In newly unsealed documents released on Friday, it was revealed the intelligence he gathered included the purported satellite phone numbers for Osama bin Laden and his whereabouts after the September 11, 2001 attacks, details on an assassination plot against then-President George W. Bush and ‘information on North Korean nuclear capabilities.

‘I knew he was a bad guy,’ Sater said, referring to bin Laden, Skullduggery reports. 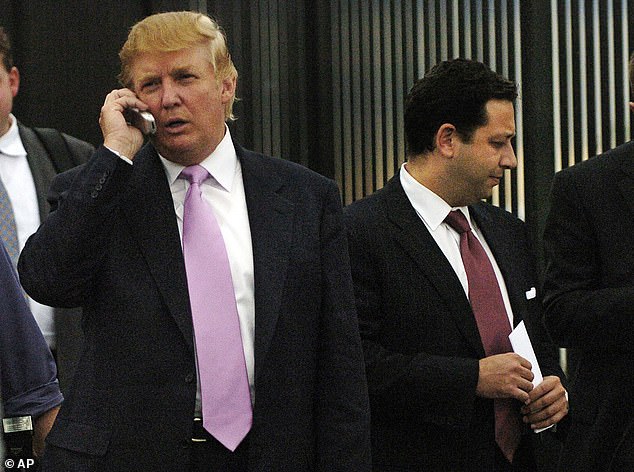 President Donald Trump (left) wanted to wanted to say on the campaign trail, during his presidential run, that ‘the guy that worked with him, you know, was doing stuff to protect our country,’ Felix Sater (right) a former government informant says

‘I knew I had the skills and the ability to protect our country, and maybe in some cases, take him out,’ Sater said.

And Trump wanted to say on the campaign trail, during his presidential run, that  ‘the guy that worked with him, you know, was doing stuff to protect our country,’ the former government informant explained.

The president, however, was told he couldn’t mention Sater’s work because it was mentioned in then-sealed court documents. Government prosecutors feared disclosing the information would be a national security risk.

Federal prosecutors in Brooklyn, New York, said in a 2009 letter made public with along with the unsealed documents that Sater’s work with the government over the course of a decade lead to the conviction of 20 individuals involved with financial fraud, ‘La Cosa Nostra’ and cyber criminals.

A federal judge unsealed 10-year-old documents that confirm in greater detail than ever before the work that he did for government agencies starting in the late 1990s and continuing for more than a decade.

It was also revealed that while acting as an informant for the CIA, Sater made trips to Afghanistan and Central Asia, where he developed intelligence on Bin Laden’s whereabouts, his satellite numbers, the internal structure of Al Qaeda and the assassination plot against Bush.

Sater was called an ‘exempliary cooperator,’ in the released documents.

‘This is 20 years that I was doing this,’ Sater told Skulldruggery. ‘I never discussed it with anyone.’

‘I didn’t do it for any accolades. I did it because I felt it was important,’ he added.

Sater admitted on the podcast to a criminal past, stemming form a bar fight and financial crimes.

‘I know for a fact that I have stopped 100,000 times more crime than I committed with my bar fight and the stock fraud,’ he said on the podcast.

‘And I know that I protected my country. And I know I risked my life for it.’

Trump distanced himself from his former pal after his connections to a former Russian-American mobster were revealed. The president then said he wouldn’t even recognize Sater if they were in the same room.