Thousands of British businesses which rely on transporting and selling imported goods face a potential crisis as Britain’s busiest freight port reportedly buckles under the coronavirus pandemic and a host of other problems, This is Money can reveal.

Shipping crates have been piling up on the dockside at the Port of Felixstowe in Suffolk, with containers ‘normally shifted within 48 hours taking up to 10 days’ to be moved off the port as it struggles to cope during the busiest time of the year, according to an industry body representing haulage firms.

The situation, which the port has blamed on staff shortages and a spike in arriving containers, has become so bad that last week Felixstowe banned hauliers from bringing back empty crates for six days.

It is attempting to ease a backlog which trade body bosses said had led ‘to significant haulage problems whereby many containers can neither be collected, nor returned.’

The Port of Felixstowe told This is Money this was a temporary move and it has once again begun accepting empty containers.

Robert Keen, director general of the British International Freight Association, which represents around 1,500 companies involved in transporting freight, warned the issues at the UK’s busiest container port ‘have escalated to a level that could be disastrous for our members’ businesses’.

A family run business which imports goods from overseas to then, in turn, sell to retailers who fill the shelves with the items they source, is facing a race against time to get the goods in, unload them into its warehouse and transport on.

September and October is its busiest time of year, with the goods coming in and quickly turned around, ready to fill the shelves in the run-up to the festive season – but it has been left in the dark as to when all of its shipments will arrive after being told of delays.

It works with a logistics firm who organises the sea transport of goods via Felixstowe.

The company fears that this delay could be severely damaging and extra temporary staff members – hired to help in the rush – are simply waiting around idly to do their job.

The bottlenecks have knock-on effects for the thousands of businesses which make their livelihoods from selling imported goods, with the problems at Felixstowe leading to delays for containers to arrive.

The port denied containers were usually moved within 48 hours. A spokesperson said: ‘Import containers remain on the port for around four to four-and-a-half days in normal circumstances, at the moment that has risen to five days.’

It added delays faced by businesses were also due to other factors and not just problems at the port.

Some businesses have complained they have been left in the dark as to when their shipments will arrive, while an email from one logistics company seen by This is Money said ‘there are no clear signs of the situation easing’.

Typically, a logistics firm acts as a middleman between a business importing goods from overseas and the container ships that bring them in.

The reality is Felixstowe is more important than Dover to Britain’s international trade.

The congestion at the port comes at a crucial time for many import businesses as they look to stock up ahead of the Christmas period, while those which ordered less during the coronavirus lockdown are once again restocking as the economy begins to recover.

The Port of Felixstowe is the UK’s busiest container port and the eighth-busiest in Europe, with as much as 48 per cent of the UK’s container trade coming through it.

It handles 4million containers and welcomes 3,000 ships every year.

It said in a statement posted on its website last Friday that the number of imported containers had been 30 per cent higher than average over the last fortnight, and apologised ‘for any inconvenience caused’.

A BIFA spokesperson told This is Money ‘a significant proportion of our 1,500 members use the port’, and that while bottlenecks at Dover usually receive more headlines, ‘the reality is Felixstowe is more important than Dover to Britain’s international trade’.

This is Money contacted the Department for Transport to ask whether it was aware of the congestion at the port and whether they planned to step in to help.

It believes the problems are a commercial matter at the moment, but a spokesman said: ‘The Department is aware of the issue and will continue to liaise with the port to monitor the situation and any impact on wider supply chains.’

The logistics company email seen by This is Money said the port had ‘experienced various challenges for some time’, with BIFA saying they initially stemmed from the introduction of a new in-house booking system introduced in 2018. 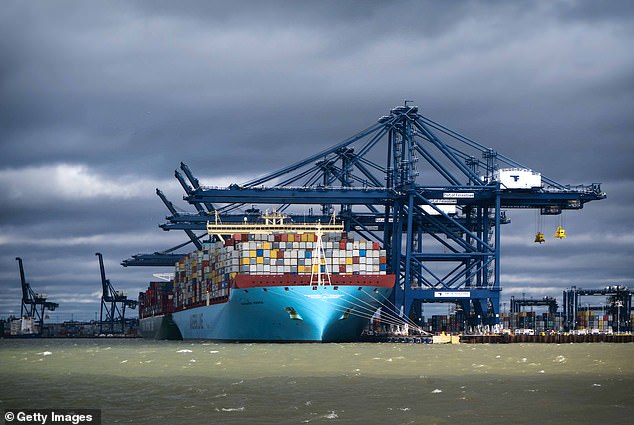 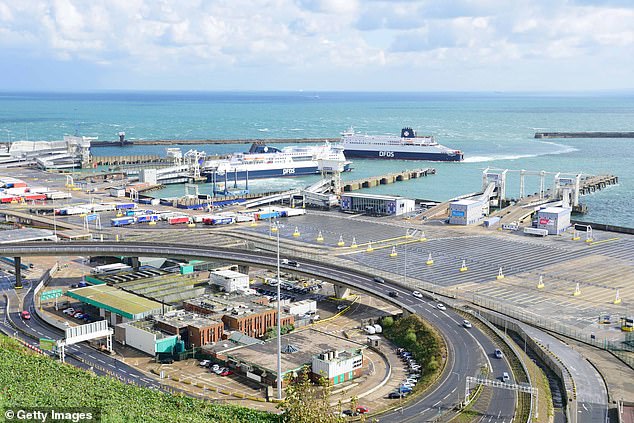 While problems at Dover (below) are often more high profile, the Suffolk port of Felixstowe was described by the UK’s freight trade body as ‘more important to Britain’s international trade’

But the coronavirus pandemic has made the backlog worse. BIFA said the port was facing ‘serious staffing issues’ and that attempts to reduce the spread of the coronavirus, for example through social distancing and by closing it a few hours a day to deep clean, were leading to delays.

The email from the logistics company added: ‘A lot of drivers are not working due to the pandemic, either because of furlough, holiday or quarantine requirements.

‘With the added complication of coronavirus-secure working practices, this means something that would normally take two hours to unload now takes almost double the time, causing further issues and delays on planned workloads.’ 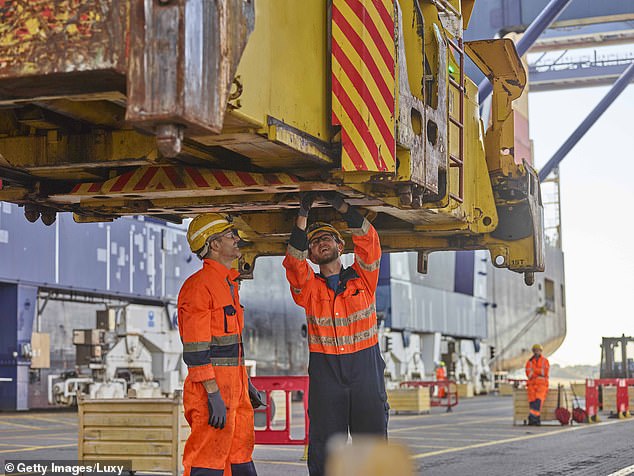 Another logistics company, Basildon-based FS Mackenzie Ltd, wrote on its website last week: ‘We find ourselves in the difficult position of having to apologise to our customers who have consignments booked with us that are arriving at the Port of Felixstowe.

‘The service disruption we are experiencing is completely out of our control and is leading to frustration and additional cost to our customers.’

In its statement published last week the Port of Felixstowe, owned since 1994 by Hong Kong-headquartered and British Virgin Islands-incorporated Hutchison Ports, said it was looking to recruit more than 100 new drivers, secure private testing for employees and expand its capacity.

It says it has also brought back 300 staff previously furloughed under the coronavirus job retention scheme.

It added it would open the port on Sundays to allow hauliers to pick up containers and increase its booking availability to more than 4,300 vehicles a day. 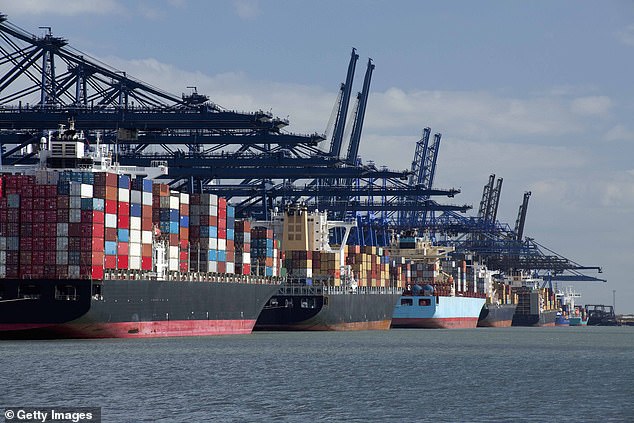 The company hit the headlines last week when it emerged it had handed a £100,000 a year advisory role to ex-Transport Secretary Chris Grayling, who had previously been widely mocked for handing a £13.8million government ferry contract to a company which owned no ships.

BIFA warned there ‘was not a simple fix’ to end the crisis, saying it would take time to train new employees when the port was already facing its busiest period of the year.

The spokesperson said its members ‘are keeping their fingers crossed that these measures will address the operational challenges, but are not confident that they will’.

This is Money has approached the Port of Felixstowe for comment, but it said it had nothing to add beyond the statement on its website from last week.