A woman who served as a helicopter pilot for the Afghan Army and believed to have been stoned to death in the ruthless Taliban takeover of the country in August, is instead alive, safe and living in the United States.

Safia Ferozi, one of just four female pilots who served in the surrendering Afghan forces, publicly refuted online images and video that allegedly showed her being stoned to death by a mob during the chaos in Kabul.

Former Captain Ferozi, 31, further revealed to US military news outlet ‘Stars and Stripes’ that she had been spirited out of the country by US forces on August 15 – the same day of the Taliban took the city.

Safia Ferozi, 31, publicly refuted claims this weekend that she had been killed following the Taliban takeover of Kabul in August. The ex-Afghan soldier fled the country during the chaos in the city’s capital, and now lives with her family in the US 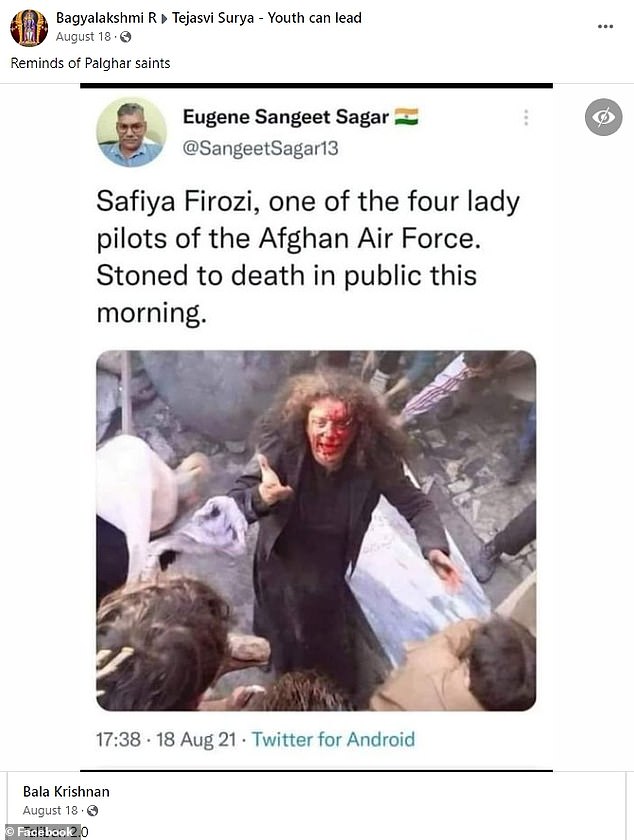 Miscaptioned images and video footage depicting a public stoning in Kabul that surfaced after the August attacks erroneously stated that the woman in the photos was Ferozi, and that she had been murdered by Taliban insurgents during the hostile takeover

During a telephone interview, the pilot told Stars and Stripes that she, her husband, Jawad Najafi, 36 – also a captain in the Afghan air force – and their 5-year-old daughter Nargis were flown by an American transport to Qatar where she gave birth to another baby girl at a US military base.

The pilot did not have internet access early in her stay in the Middle Eastern country, and only found out about the viral videos and images when a doctor showed her the disturbing content at the hospital, she revealed to the outlet.

The photographs and footage, depicting a badly bloodied woman pleading with a Kabul crowd as they surround her and pelt her with stones, erroneously captioned the victim depicted in the 2015 attack as Ferozi.

However, a fact check by the news outlet Reuters later that year revealed that the images and video had been miscaptioned, and were not actually Ferozi.

Instead, the savaged woman in the disturbing images and video was revealed to be Farkhunda Malikzada, who was falsely accused of burning the Koran and was murdered by the irate crowd in the capital city in 2015.

Speaking to Stars and Stripes, Ferozi revealed that the miscaptioned media shocked her to no end – as well as those close to her.

After giving birth, the ex-air force captain focused on letting friends and relatives know she had not suffered the terrible fate seen on the internet. 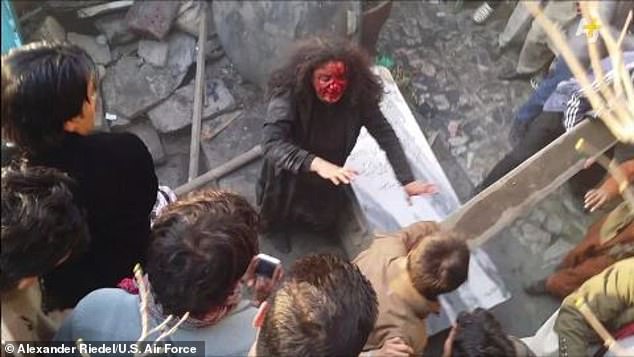 The photographs and footage show a badly bloodied woman pleading with a Kabul crowd as they surround her and pelt her with stones, eventually killing her. Contrary to captions that surfaced along with the photos on social media, the stoning actually took place in 2015

Since the images depicting Malikzada’s stoning surfaced, Ferozi’s fellow pilots had been deeply concerned for her well-being, including fellow chopper-pilot Abdul Rahman Rahmani, who had desperately searched for evidence of his former colleague’s fate.

‘I was scared,’ the Afghan soldier admitted over the weekend.

Upon leaving Qatar, Ferozi revealed that she and her family spent three months in a New Jersey military facility and are planning to settle in their new West Coast location.

The pioneering pilot believes she escaped certain death and it will be a long time before there will be women to follow her in her homeland, but the continued persecution of women in Afghanistan has forced her to admit that is highly unlikely.

She has named her new daughter Helen, because she said she wanted ‘strong’ name for her daughter.

And while Ferozi cheated death, she believes she likely would have been added to the distressing statistics in the wake of the Taliban’s bloody takeover.

More than 100 former members of the Afghan security forces have been executed or forcibly disappeared by the Taliban despite a proclaimed amnesty, said a recent report by Human Rights Watch.

‘If I was in Afghanistan, I’m sure it would have happened to me,’ Ferozi said. 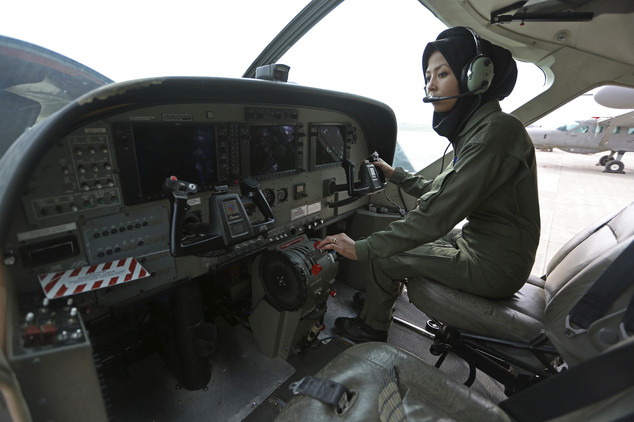 Ferozi served in the Afghan military for six years as a captain and helicopter pilot before fleeing the county during the unrest in August. It was not her first time fleeing her homeland amid a hostile takeover, however. She first fled the country as a young girl in the 90s, before the Taliban first took over the country. She returned after the group lost power 20 years ago 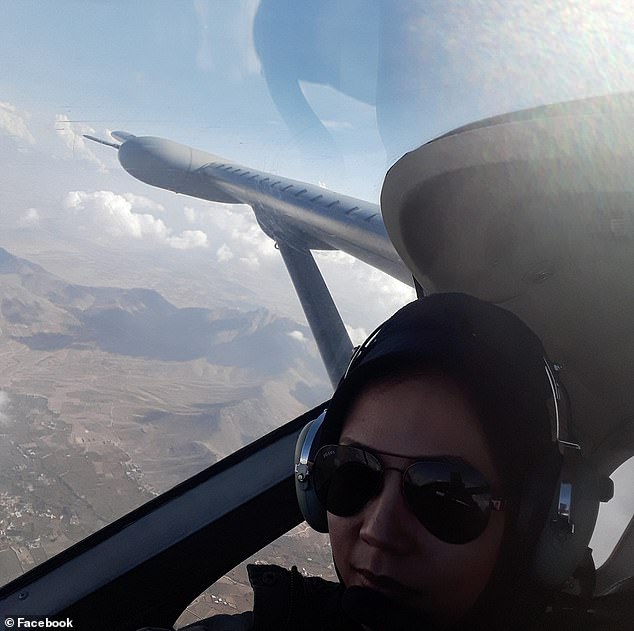 Ferozi was just the second female pilot to serve in the Afghan Army, and one of just four before she left after the fall of Kabul to the Taliban earlier this year

Ferozi’s family first fled from their home in Kabul when she was a child in the 90s, during the then ongoing civil war. Then just a young girl, Ferozi and her family took refuge in Pakistan, returning to the country only after the fall of the Taliban.

Years later, as a teen in post-Taliban Afghanistan, Ferozi saw a TV commercial urging women to join the country’s military.

Spurred by the advert, Ferozi quickly decided to enroll in the military academy, where she studied to become a communication officer.

However, shortly after signing on, the aspiring soldier changed course, after it was announced at the academy that Afghanistan’s air force was looking for women to become pilots.

Ferozi and a dozen other women applied for the program. She was the only one of the 12 who passed the tests to enter the training.

During her training at an airfield in the western province of Herat, she met then-Captain Najafi, with the pair marrying shortly after, in 2014.

Ferozi graduated from training in 2015. She gave birth to their first child later that year.

For a time, Ferozi was one of only two female pilots in the Afghan air force, a number that has since grown to four. 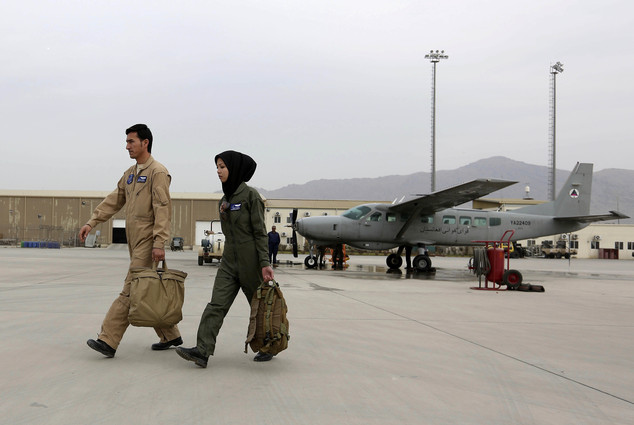 During her training at an airfield in the western province of Herat, she met Captain Jawad Najafi. The pair would later marry in 2014, and now live in the US with their two daughter 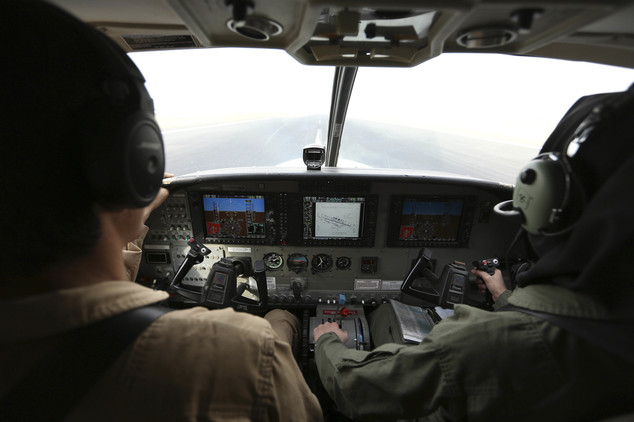 The pair pictured sitting in a C-208 plane at the Afghan military airbase in Kabul, Afghanistan in 2016

‘As a woman you face many challenges, but you have to deal somehow with all those problems,’ she told the AP in 2016.

‘When I wear military uniform, I really, really feel proud of myself as a woman.’

Ferozi has since left the Afghan military and is now a civilian along with the rest of her family, and is looking to resettle in Orgeon in the near future, she told the outlet.