They didn’t look like men and they didn’t sound like men – but these women insisted they had every right to swim in a male-only pool.

Tempers were as hot as the weather yesterday as they arrived en masse and jumped in to the water as part of a protest against proposed gender laws.

One put on a bushy beard while another swam in a lime mankini – a joke male version of a bikini – to make their point that they ‘identified’ as men.

But regulars at the men’s bathing pond in Hampstead, North London, didn’t see the funny side. And neither did the police who arrived and escorted the women out amid fears that they could be breaching the peace.

The invasion was part of a nationwide campaign set up on Mumsnet called #ManFriday which encourages women to ‘self-identify’ as men for the day on Fridays in a protest against possible changes to gender laws.

Campaigners say changes to the Gender Recognition Act could enable people to simply declare themselves to be a man or woman to get all the legal rights of either sex.

Amy Desir, 30, who wore the mankini and led the protest group of around 20 women, said yesterday: ‘We are here to raise awareness. There’s a legal consultation due to come out this summer asking for the law to change to say that any man that says he is a woman can get all the legal protections that women do.’

The mother of two and her fellow campaigners are concerned that the proposed legislation would enable predatory men to target women in single-sex facilities. Hampstead has three ponds for swimming: one for men, one for women and one mixed. In order to cater for transgender women, the women’s pond changed its rules last December to allow men in who say they identify as female.

Yesterday the women protesters told staff at the pond that they ‘identified as male’ and said they had the right to swim there. But police arrived 15 minutes later and they were forced to leave.

‘We’re clearly not men, but we’ve just been allowed in by Hampstead’s own policy,’ Mrs Desir said. ‘Women’s safeguarding has gone out the window.’ 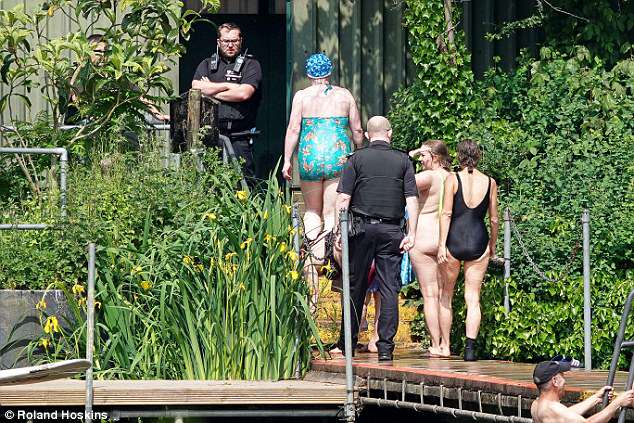 Hannah Clarke, 39, who also attended the protest yesterday, said: ‘I would hate to think that I had upset anybody here today, but this is the point of a protest. We want to keep single-sex places single-sex and that was the aim of today. And clearly it’s not just women that want them to stay single-sex, is it?’

There was widespread anger among the male swimmers at the pond. Peter John, 81, said he thought the invasion by the women was ‘ridiculous’ and urged the them to use the pond for female swimmers.

Mr John, from Hackney, said: ‘They’re saying, ‘I want to identify as a man today’. That’s not how this works. Women have their own female-only pool, we have ours and if you want to swim with men then go to the mixed pond.

‘Women have their own pool where they can bathe topless. This is absolutely ridiculous. This has been here since Victorian times!’

Ken Menczer, 70, from Camden, said: ‘We should be introducing disability measures over transgender measures. 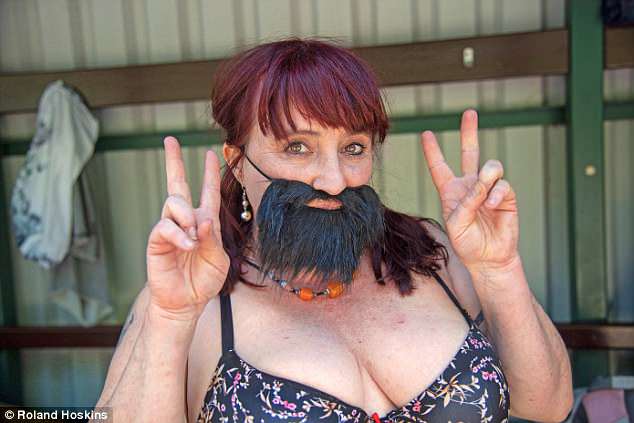 One man shouted: ‘They aren’t men!’ Another said: ‘This is ludicrous. If I turned up at the female-only pond and claimed to be a woman I would never get let in. This is our space and that’s how it should stay.’

PC Barry Macefield of Hampstead Heath constabulary, said: ‘They’ve been peaceful, when we’ve asked them to leave they’ve left so we’ve got no issues with that. There were some men annoyed because they felt their privacy had been invaded and some who were concerned about photography.

‘They’ve had a chance to make their point which they have done peacefully – but you can’t enter a facility designated for the opposite sex, and if this occurs with men in the women’s ponds we’d deal with that too.’ He added: ‘The rules need clarity.’