Loretta Lee is suing Google for failure to prevent sexual harassment in the workplace. She worked for the tech giant at the Mountain View campus in California for eight years before she was fired for ‘poor performance’

A female software engineer at Google sued the tech giant for creating a ‘bro culture’ where she was sexually harassed at work, a lawsuit claimed.

Loretta Lee worked for the company in Mountain View, California, near Silicon Valley for eight years before she was fired in February 2016 for ‘poor performance’.

She filed a lawsuit to the Santa Clara County Superior Court alleging she was groped, slapped and sexually harassed by coworkers, according to The Mercury News.

Google has faced a series of claims in the last year of sexual misconducts and gender discrimination.

The company fired James Damore, former engineer for Google, after he circulated a memo stating there was a biological explanation to why woman were paid less.

The US Department of Labor and another former employee also accused the company of paying women less last year.

Now, Lee is filing her own lawsuit claiming male employees groped and slapped her before she was let go in 2016. She claims the company was notified by the continuous sexual harassment but did nothing to prevent it.

The suit described an incident where a co-worker popped up from underneath Lee’s desk one night and told her ‘she’d never know what he’d been doing down there’.

She reportedly was afraid he had left a camera or device installed underneath her desk. 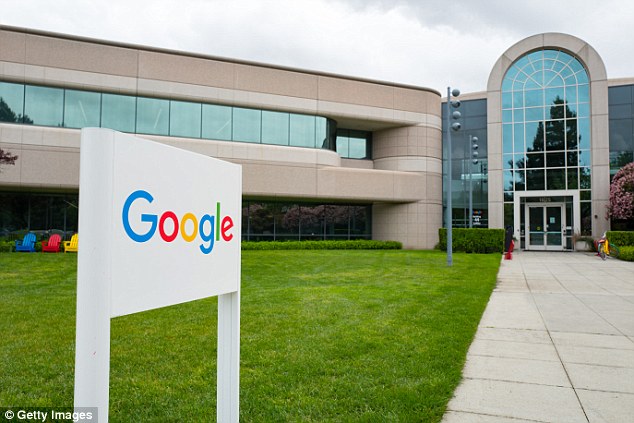 Google claims it followed its procedure when employees file complaints. But Lee said in the lawsuit she was wrongfully terminated and experienced sexual harassment daily from male colleagues. During one incident, a male colleague showed up to her apartment with alcohol unannounced. Pictured is Google’s main campus in Mountain View, California

Lee was first hired for the company in 2008 at their Los Angeles campus before she was moved to the main location in Mountain View.

She claims the environment she experienced at the company for eight years was ‘severe and pervasive’ daily.

The lawsuit said she also experienced lewd comments, male colleagues spiking her drinks with whiskey, and males shoot her with Nerf balls.

One male colleague allegedly sent Lee a text message asking for a ‘horizontal hug’ and another showed up at her apartment unannounced with alcohol.

One male colleague grabbed her lanyard hanging form her neck to ask her for a name before he grazed his hand across her breasts, the lawsuit alleges.

Lee was told by her superiors in the company to file an official complaint the man who groped her, but she said she was afraid of being an ‘informer’.

She was then written up for being uncooperative, which forced her to file her complaint

But then human resources said it found her claims ‘unsubstantial’ and did nothing, according to the lawsuit.

Google told The Mercury News that it has ‘strong polices against harassment in the workplace.’

It also stated that the company reviews all complaints that it receives and proceeds accordingly.

Lee is seeking an undisclosed amount from Google on top of $25,000 for failure to prevent sexual harassment, disability discrimination, wrongful termination and retaliation.