An incredible immaculate conception has occurred at one of Australia’s top aquariums.

Freckle, a female eagle stingray, managed to give birth to a baby despite not coming into contact with a male for nine years.

Baby Ani: the cutest new addition to the aquariums family is also a miracle as her mother hasn’t been into contact with a male in NINE years

The 11-year-old ray – one of the park’s main attractions due to the array of white dots found on her back – threw her tail up to conventional pregnancy and instead chose to do it alone, opting for ‘parthenogensis’ 9News reported.

The term ‘pathenogenesis’ is taken from the Greek work ‘pathern’ which literally means ‘virgin’ and ‘genesis’ which means ‘origin’.

Just like her mother: Baby Ani- who also has white dots all over her back – is seen swimming around playfully as fascinated staff watch over her closely

‘It is a rare occurrence among vertebrates such as eagle rays – so this is a very special arrival’ Stow continued.

The remarkable news was announced just this week, but staff at Sea Life knew they were onto something incredible months ago.

Senior aquarist Libby Eyre said: ‘We noticed something going on with Freckle in early June when her belly was noticeably larger’.

Eyre revealed they had noticed her eating more and becoming less interested in participating in training which meant that she had to be protecting something, although they were also extremely doubtful as there were no males in her tank.

However, at the end of July, a belly that had grown on Freckle was no longer there and from there, they knew that a phenomenon had occurred. 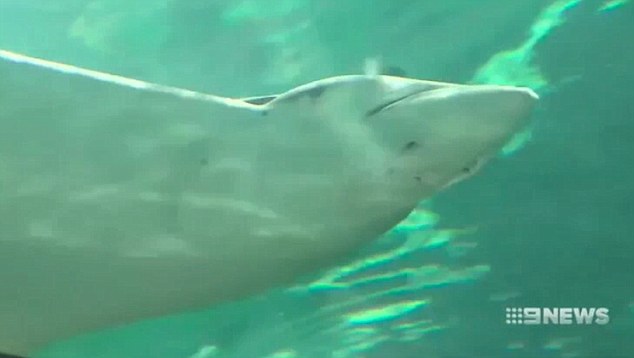 ‘There were screams of excitement from staff – everyone was amazed’ Eyre said.

Ani is now four weeks old and cannot go on display just yet but fans are urged to stay updated on Sea Life’sInstagram page. 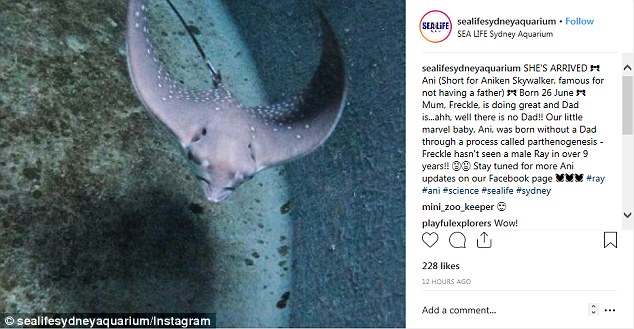 Sea Life Aquarium in Sydney are clearly ecstatic at the news, excited to introduce marvel Ani to the world