Female veterans are honoring their fellow troops by channeling their inner bombshells and dressing up as 1940s-style pin-up models.

The non-profit Pin-Ups for Vets is celebrating its 15th anniversary with the release of its upcoming 2021 charity calendar featuring 12 service members who have traded their uniforms for vintage pin-curls and A-line dresses.

‘I think the calendars are a symbol of hope. The whole concept of the pin-up was to remind our GIs what they’re fighting for back home,’ founder Gina Elise told Fox News of the non-profit’s signature fundraiser.

Pin-Ups for Vets is celebrating its 15th anniversary with its 2021 calendar featuring female veterans dressed as 1940s models. ‘I owe the Navy for making me a strong woman who believes in equality. I could do it again, I would serve my country proudly,’ said Claudia, pictured, a four-year Navy veteran 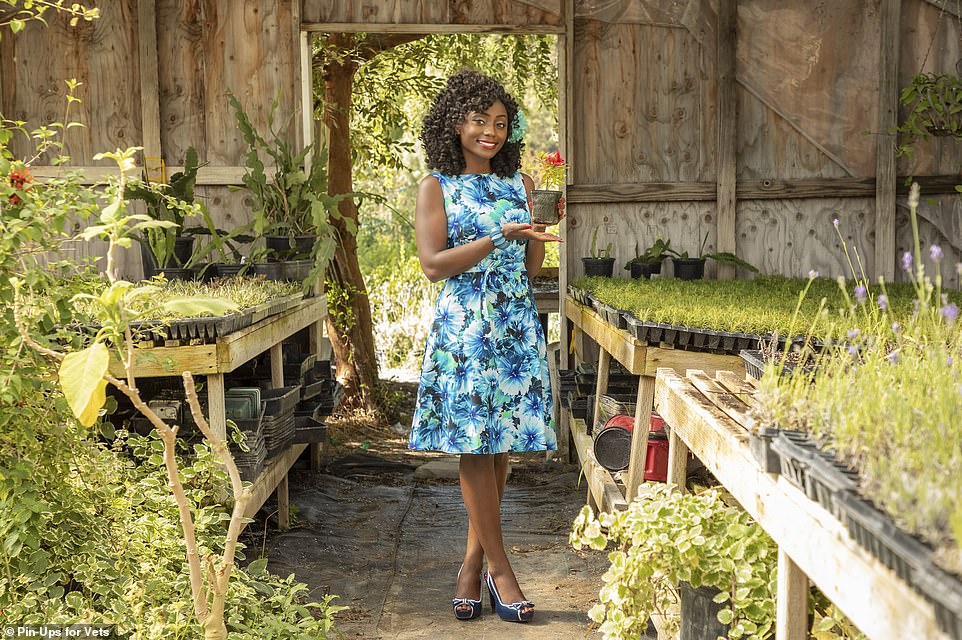 The non-profit raises funds for veteran and troop initiatives with its annual calendar. ‘It is special to be involved with Pin-Ups for Vets because of the amazing work they do. They are an organization that gives back to a vulnerable part of our community, and that alone is invaluable. Their work is a great support to us Veterans, and I am so grateful that I was able to contribute to their organization through the 2021 calendar, which was an absolutely beautiful and wonderful experience,’ said Ahmika, pictured, a four-year Marine Corps veteran 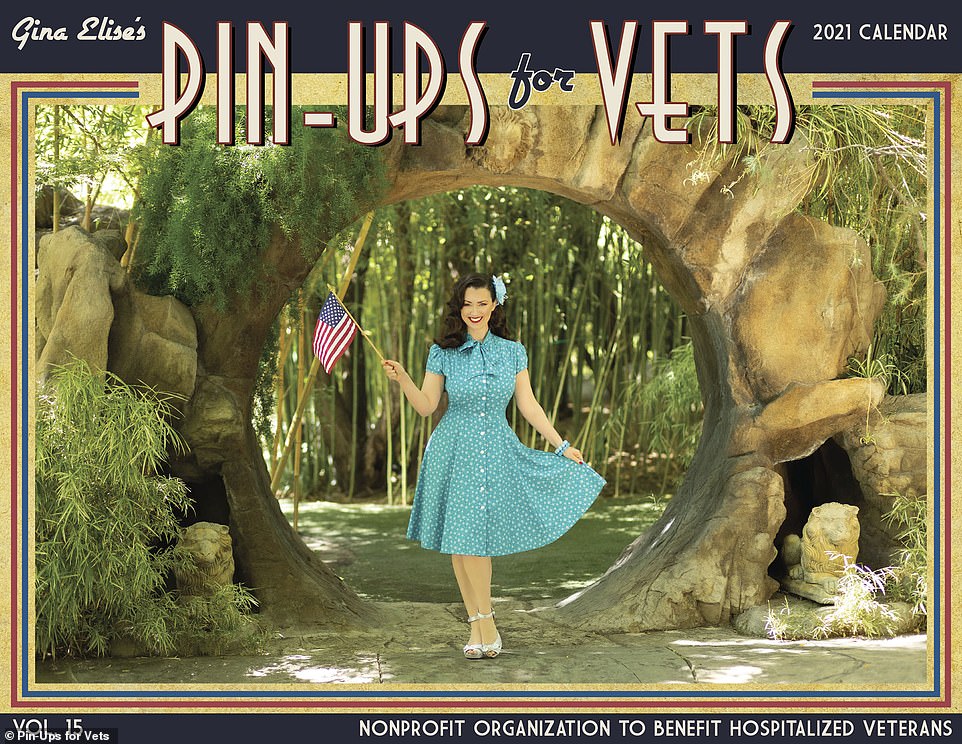 Pin-Ups for Vets was founded in 2006 by Gina Elise, who is pictured on the cover of the 2021 calendar

‘This is a fun and beautiful art that we can all appreciate. But it also serves as a reminder that so many incredible Americans have stepped up to serve our country. And that in itself is beautiful.’

Elise launched Pin-Ups for Vets in 2006 as a recent graduate from UCLA. At the time, there were a number of stories about troops coming back from Iraq needing medical care.

One of Elise’s favorite images is a pin-up of 1940s starlet Betty Grable looking over her shoulder and giving the camera a come-hither stare while modeling a white bathing suit.

The concept inspired her organization’s pin-up calendar, which raises money for veterans and deployed troops. 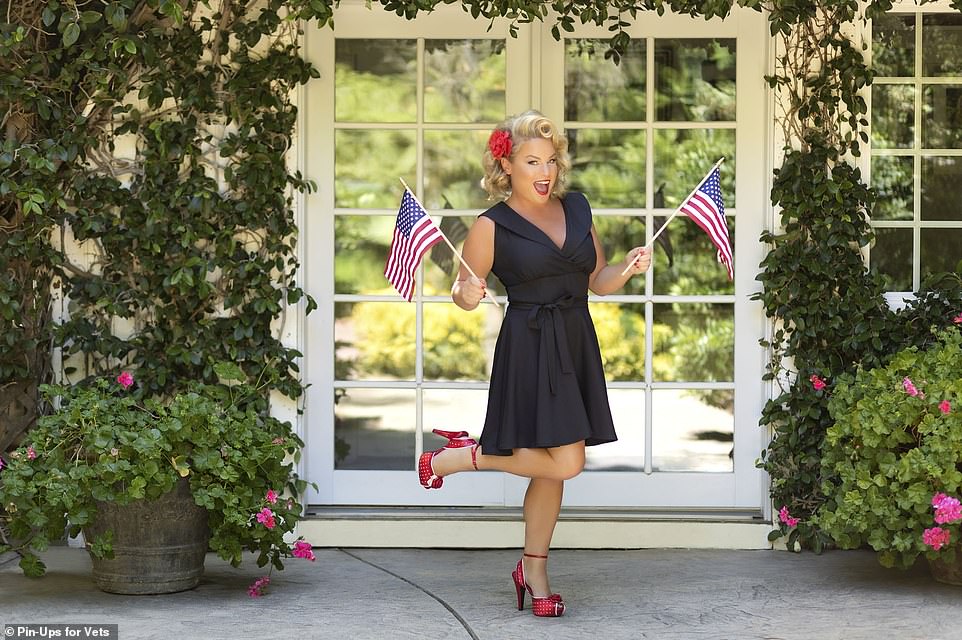 ‘I am thankful to the military for giving me opportunities to grow, improve and challenge myself in order to become the woman I am today,’ said Megan, pictured, who served in the Air Force 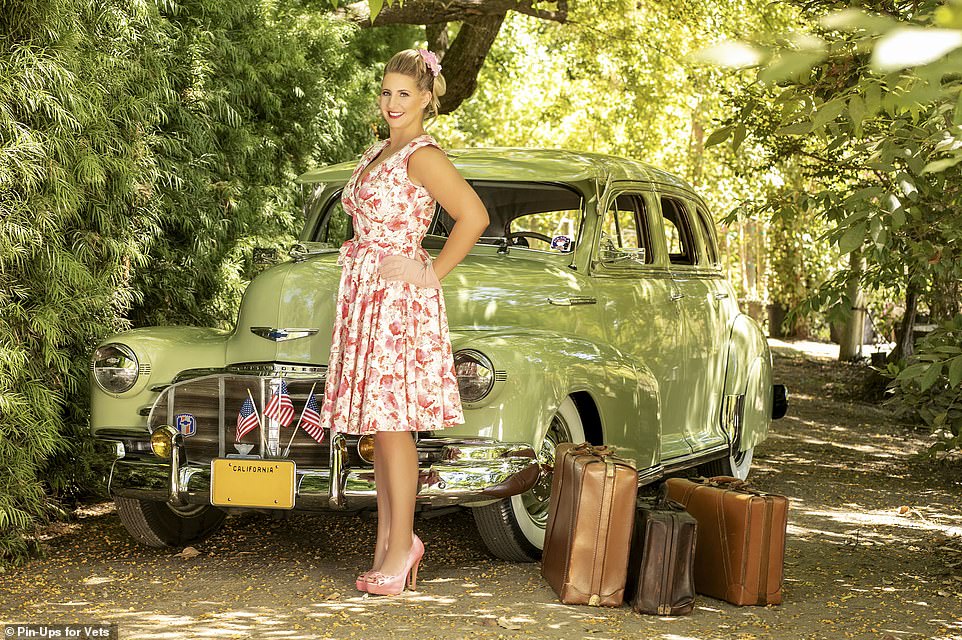 ‘My Marine Corps uniform will forever be the most prideful thing I will ever wear. But with the uniform, comes uniformity. And being a female, you can lose your feminine touches. My Marines used to call me ‘a cool guy with long hair.’ Pin-up girls are very feminine. They are classy. And they are beautiful. Being a pin-up shows that even though we spent years tying our combat boots and twirling our hair into buns to look more masculine, we are still beautiful women. We are gorgeous, classy women with a background that surprises mostly anybody we meet. Being a pin-up is an honor and a privilege, just like my five years spent in the Marine Corps,’ said Monica, pictured 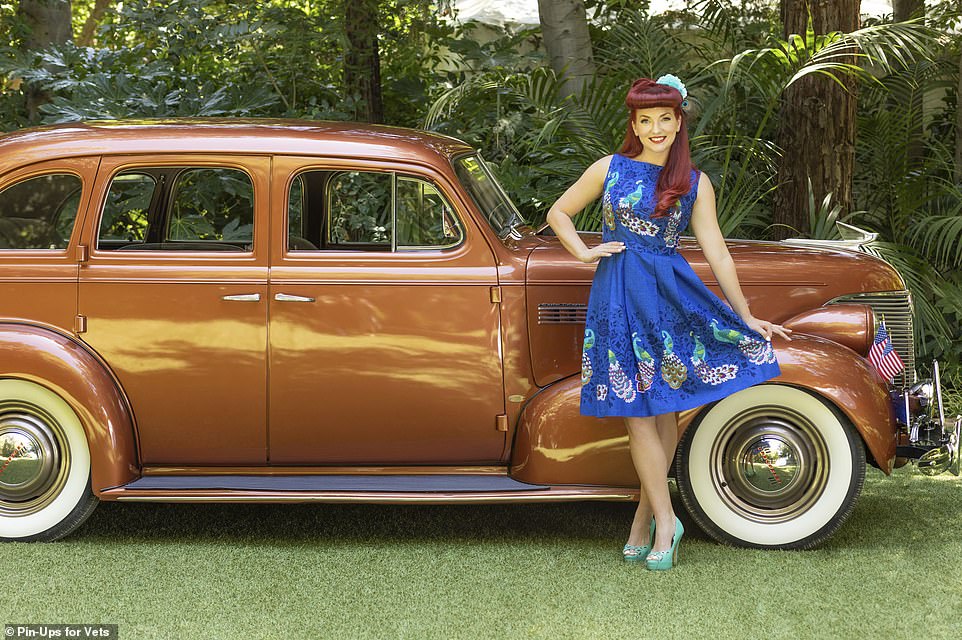 ‘I am super thankful to be involved with Pin-Ups for Vets. As a Veteran, it is important for me to give back to my military family, and what a fun way to do it!’ said Brittinay, an eight-year Air Force veteraan and jet engine mechanic 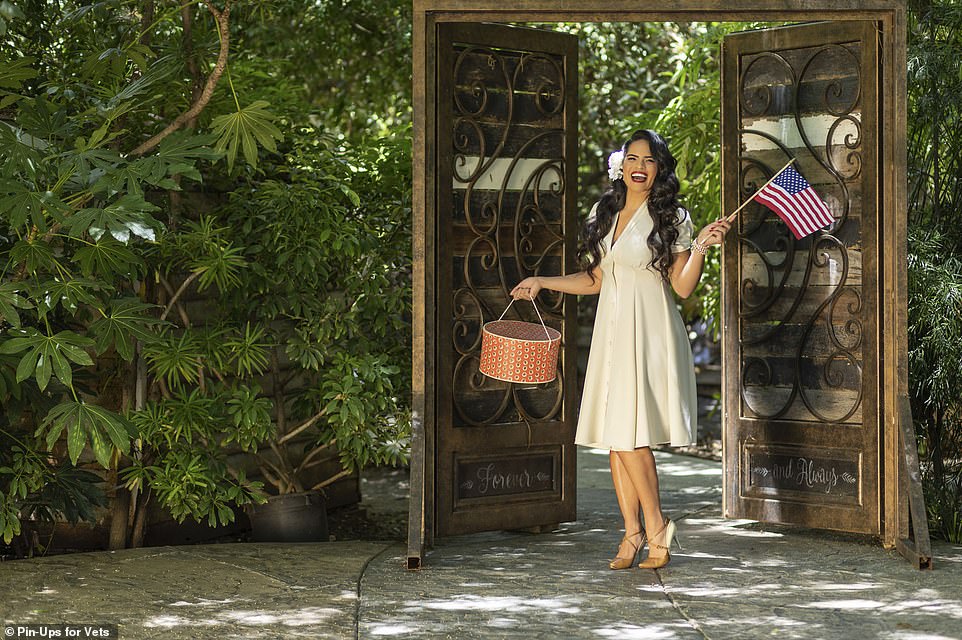 Alicia, pictured, is a six-year Army veteran who was part of a specialized branch of the chemical corps that worked with the Explosive Ordnance Disposal (EOD) Techs

Over the past 15 years, Pin-Ups for Vets has donated over $80,000 worth of rehab equipment to help therapy departments at VA hospitals nationwide, according to Fox News. The funds are also used for health care program expansion in the U.S.

Every spring, the non-profit puts out a casting call for models and receives hundreds of submissions from veterans across the country.

‘It’s very hard to narrow down the list,’ Elise admitted, ‘but for 2021 we have an amazing group of women eager to work towards a common good, something greater than themselves.’

This year’s models cover all branches of service and include a jet engine mechanic and security forces.

Before COVID-19, Pin-Ups for Vets would go on a 50-state VA hospital tour where Elise and other volunteers would dress up in World War II-style clothing and friend veterans. 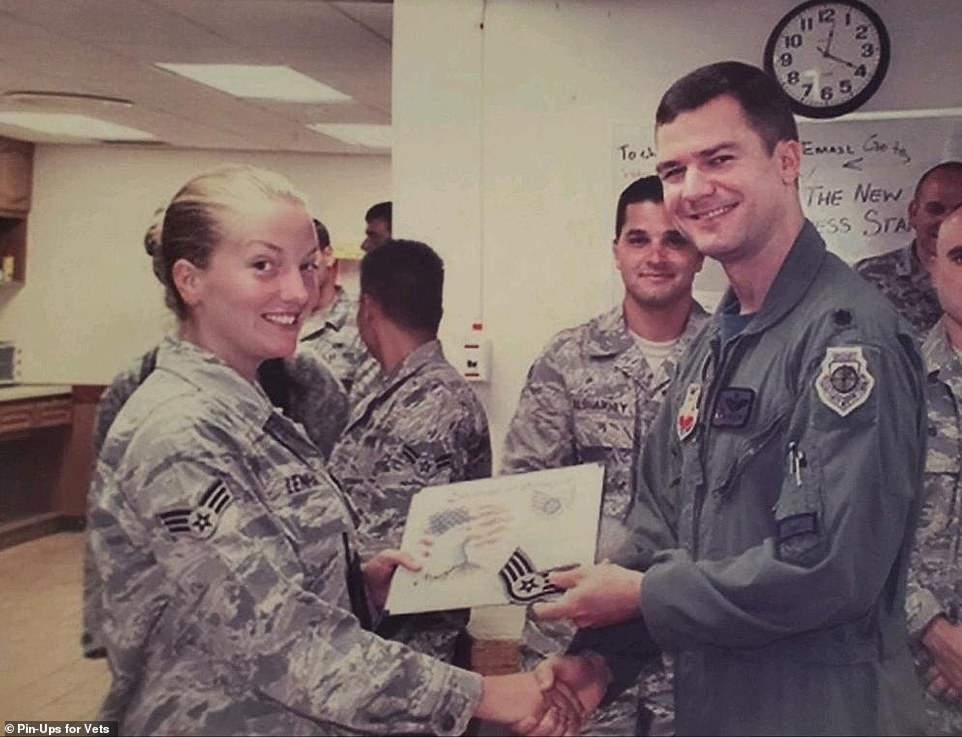 Brittany is pictured received a certificate in her Air Force uniform. She graduated high school at 16 and joined the Air Force a few months later when she turned. 17 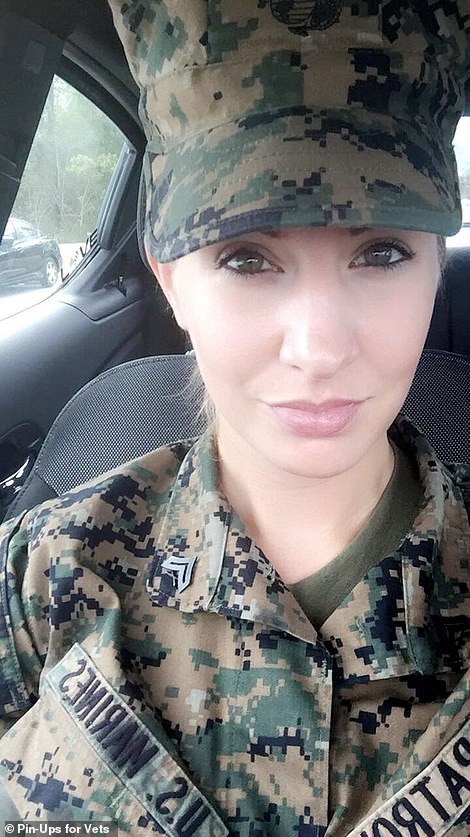 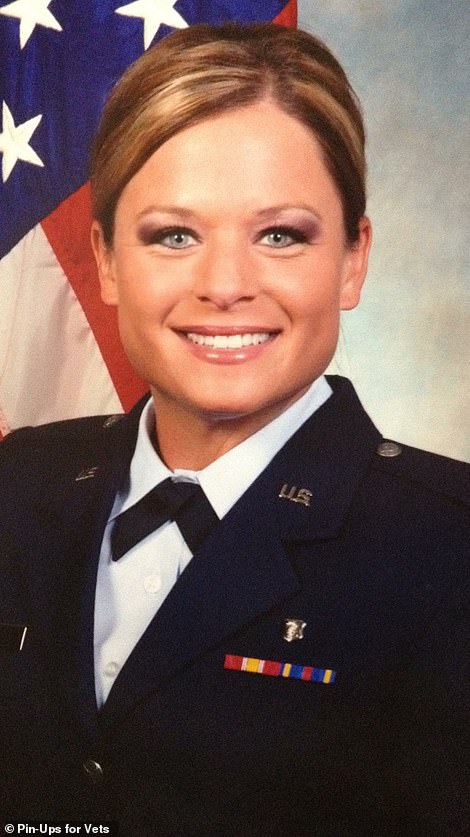 Monica, left, was an avionics technician on CH53Es while in the Marine Corps. Megan, right, has been a licensed mental mental health therapist for the past 15 years. She was given the opportunity to commission as an officer in the Air Force in 2012 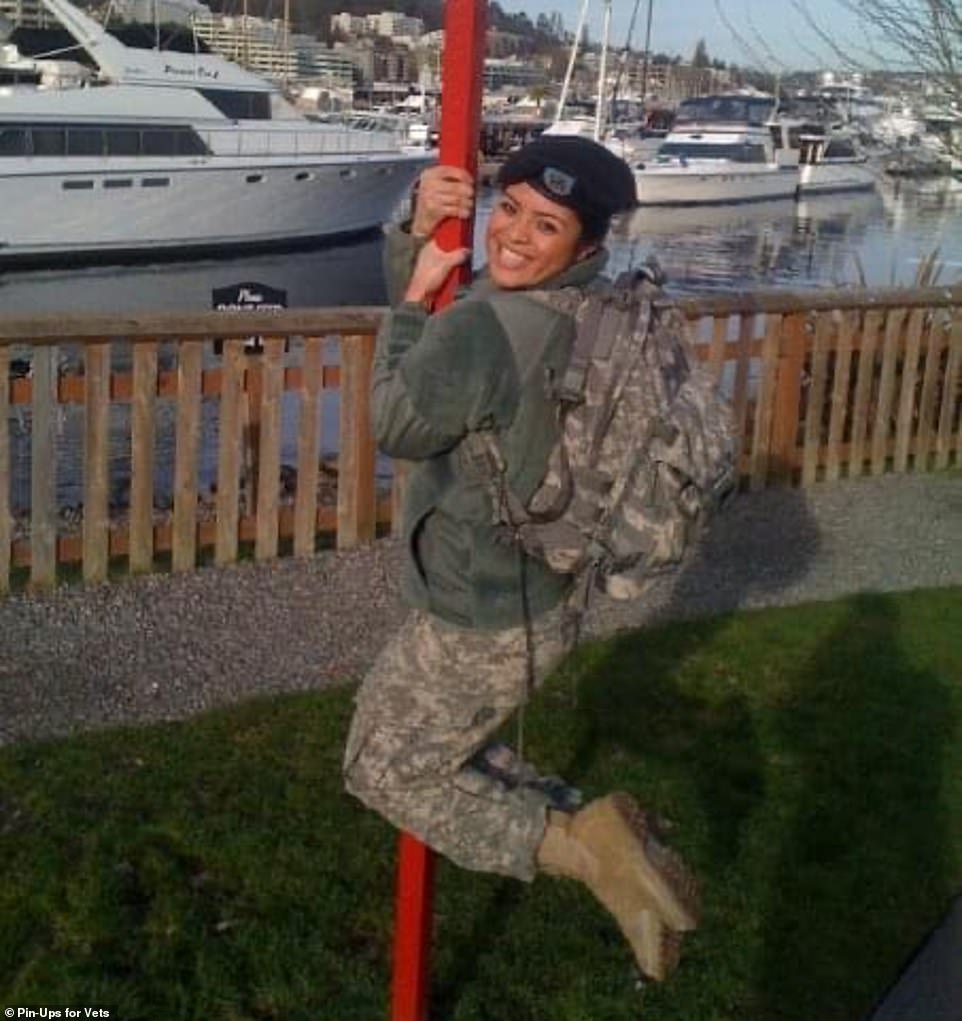 Alicia is pictured striking a pose while in her army uniform. She was a ‘Technical Escort,’ or 74DL3, during her time of service 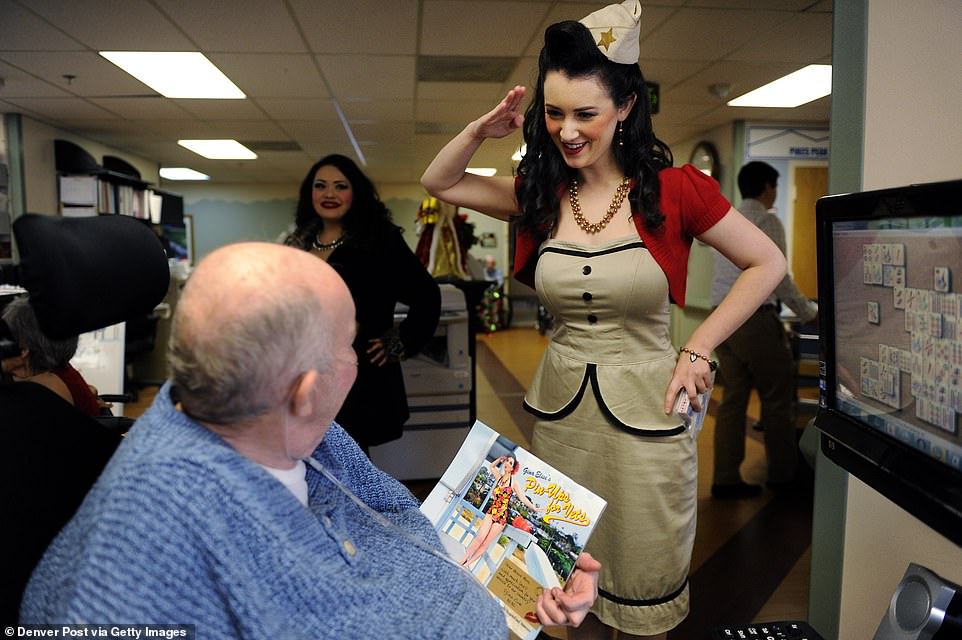 Elise is pictured saluting Philip Justice 77, who was drafted into the Army in 1957, during her visit to the Denver VA Medical Center in 2011. Her organization has visited thousands of VA hospitals over the years 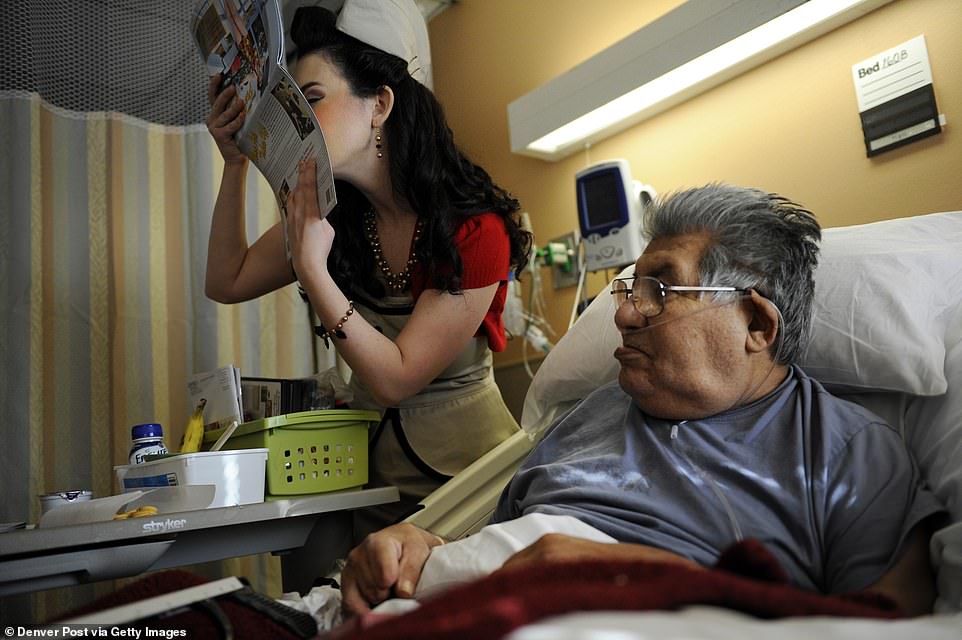 Elise, picture with Army veteran Manuel Olveda in 2011, has raised over $80,000 in donations through her organization 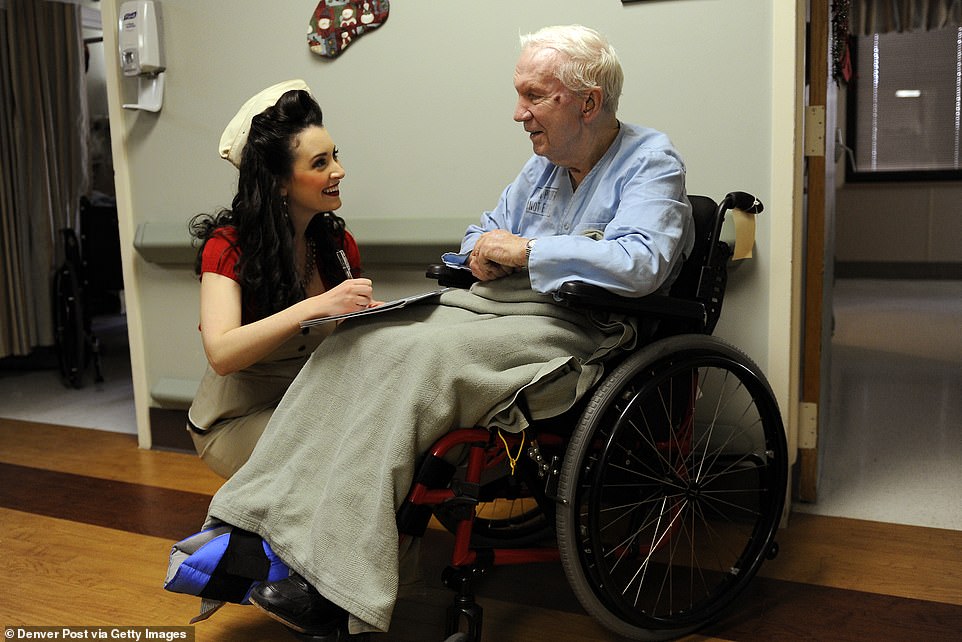 Elise is pictured signing a calendar for former Navy Lt. Bill Wood during her visit in 2011.  This year, amid the pandemic, the organization will be shipping care packages to hospitalized veterans as well as deployed troops

‘When I produced the first calendar, I would give people the option of either purchasing a calendar for themselves or buy one that I would take with me on a hospital visit,’ she explained.

‘I started going to VA hospitals with those calendars that people had bought as gifts and literally going from room to room to deliver them myself in person to the veterans.’

When Elise would introduce her fellow volunteers, the patients would be surprised to learn that they were veterans, too. She noted that they call the work they do ‘service after service.’

This year, amid the pandemic, the organization will be shipping care packages to hospitalized veterans as well as deployed troops.