Without question, a successful lifestyle brand can be a licence to print money. Just ask Gwyneth Paltrow, whose company Goop started as a humble emailed newsletter of recommendations but is now a £190 million business with its own Netflix series.

And it seems that the Duchess of York is planning to follow in Gwyneth’s dainty footsteps. For she is looking to become an international business sensation via a new brand, Duchess Inc.

Harry and Meghan, take note. It looks like Fergie could get there first.

Her brand, the items of which are currently at design stage, could be a template for Sussex Royal. It hopes to combine ‘glamour’ with ‘compassion’ and includes a collection of towels, soaps and teas.

An undated photo shows the Duchess of York on the red carpet. Her brand, the items of which are currently at design stage, could be a template for Sussex Royal. It hopes to combine ‘glamour’ with ‘compassion’ and includes a collection of towels, soaps and teas

Labelled The Duchess Collection, these will come in orange packaging with a logo featuring two rearing winged horses that is rather reminiscent of the livery of uber-brand Hermes.

Other items — including Tiffany-style rings and ‘Majestic’ bedlinen — are certainly aiming for the upper end of the market, and playing on her royal links.

Indeed, if you buy an item of jewellery, from £60 hooped earrings to a £110 bracelet from the Duchess Collection, you will receive a ‘free coronet pin’ badge.

Coronet pendants and bracelets are also for sale. They will be available on the shopping channel QVC.

There are also children’s books (she has written 22) and a range of ready-meals, called ‘Fergie’s Farm’, which it is hoped will be launched later this year.

It is yet to be seen whether the Duchess, who has endured a chequered business history since her divorce from Prince Andrew in 1996 — at one point reportedly finding herself with debts of £5 million — will make a success of this latest venture.

One thing is certain: in a climate where royals trading on their links to the Queen are being scrutinised more than ever, Fergie is walking a tightrope. 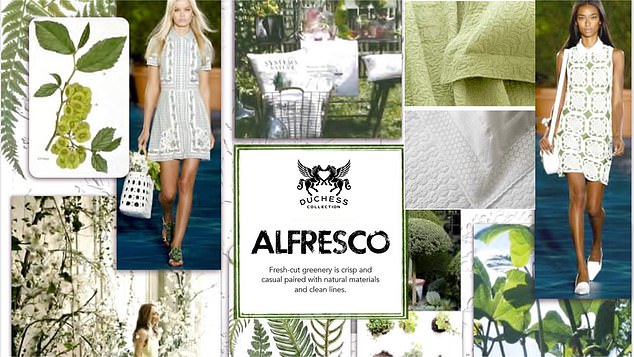 Towels, sheets and duvet covers are based on three themes: Bloom, Alfresco and Majestic. Majestic features filigree, paisley and beading and nods towards ‘Eastern cultures’. The seven-piece bedlinen set is priced at £190. The Duke and Duchess of Sussex could find themselves perusing items designed by Fergie, as she is said to be launching a range of bed linen at the Canadian department store Hudson Bay later this year 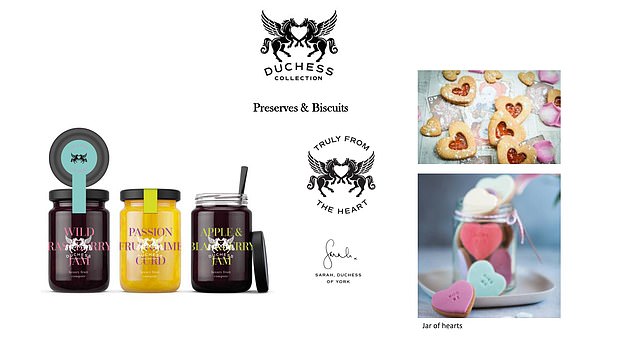 She will no doubt be hoping to avoid the dismay which greeted Peter Phillips’ and Lady Kitty Spencer’s attempts to sell milk to the Chinese, as revealed by the Mail this week

She will no doubt be hoping to avoid the dismay which greeted Peter Phillips’ and Lady Kitty Spencer’s attempts to sell milk to the Chinese, as revealed by the Mail this week. Peter was seen holding a glass of milk in front of a stately home, with the caption: ‘British Royal Family’ while Lady Kitty informed viewers: ‘The day of the Royal Family usually begins with a cup of milk or a cup of tea.’ Although there is a vague mention of ‘ancient palaces’ in the blurb for her Majestic bed linen, Fergie insists in promotional material that it’s all about herself and her experiences.

But her bath products are inspired by the scents of her garden at Royal Lodge, the floral images on her tea cups are based on photographs which she has taken.

The word ‘Duchess’ is used, and used often but — as her ex-husband reminded us in his car-crash interview with Emily Maitlis — ‘The Duchess’ is indeed her title.

Still, might Duchess Inc be one in the eye for the Duke and Duchess of Sussex? 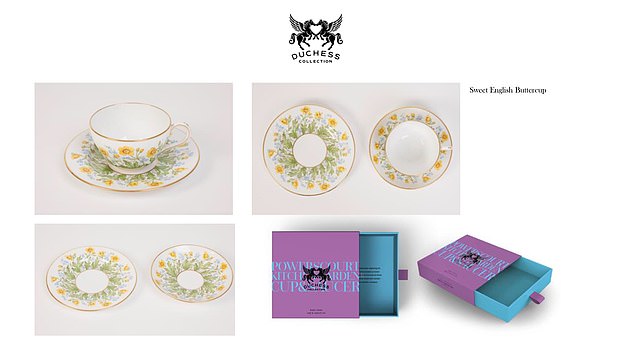 The word ‘Duchess’ is used, and used often but — as her ex-husband reminded us in his car-crash interview with Emily Maitlis — ‘The Duchess’ is indeed her title

We are waiting to see what the Sussex Royal brand will sell, but they have trademarked dozens of potential uses of the name from stationery and pyjamas to socks and hoodies. It looks, however, as if the Duchess might just pip them to the post.

The tagline for her brand is: ‘Entertainment, Edutainment and Lifestyle.’

The Duchess, 60, has already pitched the idea to a select number of super-rich potential investors with dreams of raising £10 million to fund it. 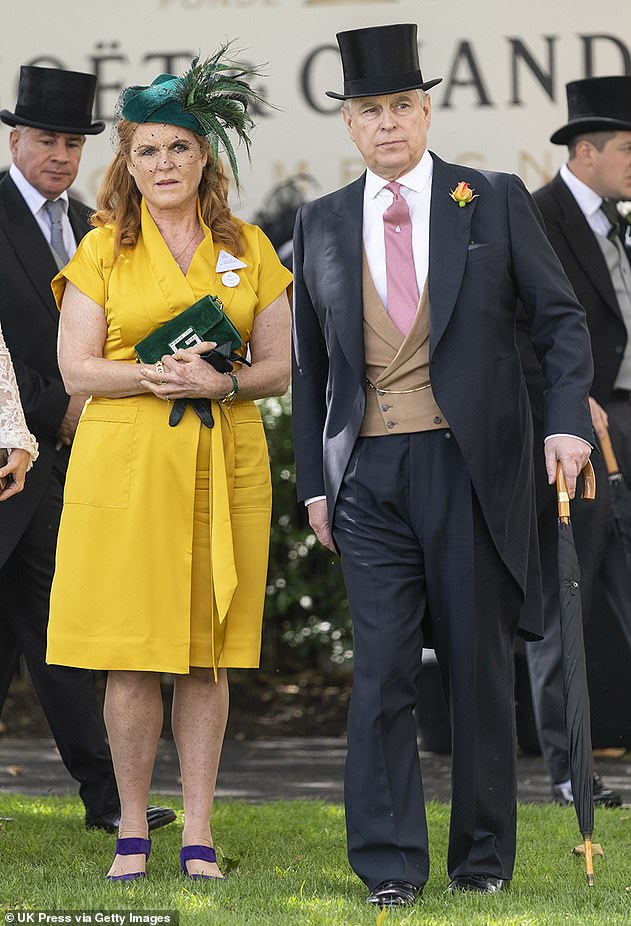 Sarah Ferguson, 60, stepped down from the executive role at Gate Ventures to focus on ‘other business and charitable ventures,’ the firm said on Tuesday (Ferguson pictured with the Duke of York in June 2019)

In a PowerPoint presentation pitch, seen by this newspaper, the Duchess describes herself as ‘globally one of the most written about women’ and a valuable ‘brand’, ‘recognised across the world and loved across continents’.

She also cites ‘analyst’ claims that Weight Watchers’ success during her 11-year association with the dieting brand was down to the ‘Fergie Effect’.

She has already touted the idea to several potential backers with the hope of raising an initial £3 million. 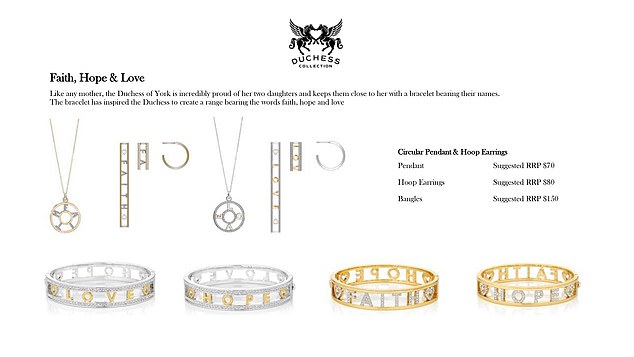 Said to be inspired by her own jewellery collection, the concept range from the Duchess Collection includes a pendant (left) stamped with love and courage slogans, based on one given to Fergie by her friends on her 50th birthday. It costs £50. Other pieces include rings, bangles and necklaces (above and right) featuring the words ‘faith’, ‘hope’ and ‘love’, said to be inspired by her daughters, Princesses Beatrice and Eugenie. The packaging includes an inspirational poem which runs: ‘Take a moment/ That is the key/See the light/Which will set you free’ 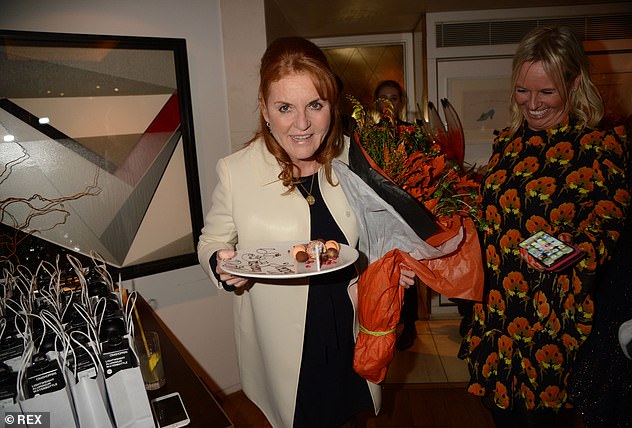 Prince Andrew’s ex wife joined Gate in 2017 as an executive director ‘to assist with the branding and marketing of its products and productions. Sarah Ferguson Duchess of York Discover Film party at the Ivy Club, London

The promotional literature boasts of the Duchess’s ‘unique perspective on the world’ and speaks of her ‘vision to create a better world founded on realism and empathy’. An unspecified percentage of profits will go to charitable causes.

There are three brands. Ginger & Moss is the premium brand, comprising tea, textiles and wallpaper and will be available at stores such as Harrods and Selfridges.

Promotional material says: ‘[The] Duchess Collection is a carefully selected collection of products inspired by the Duchess’s creative vision . . . rooted in the Duchess’s own family heritage.

‘Accessibly priced and available through premium supermarkets, high street retail and food service, the range of products provides a touch of glamour, genuine compassion and inspiration in every unique product’.

The planned products include ‘pudding and mocktail herbal teas’ called Mint Humbug and Pink Fizz, ‘body and bath’ fragrances based on the Duchess’s garden at Royal Lodge in Windsor, and fashion jewellery carrying inspiration slogans such as ‘hope, faith, love’.

Finally, there is a range of organic convenience foods branded ‘Fergie’s Farm’, which she hopes to sell in supermarkets.

Last night, a source close to the Duchess said despite the idea being touted in recent months, Duchess Inc is in its early stages. 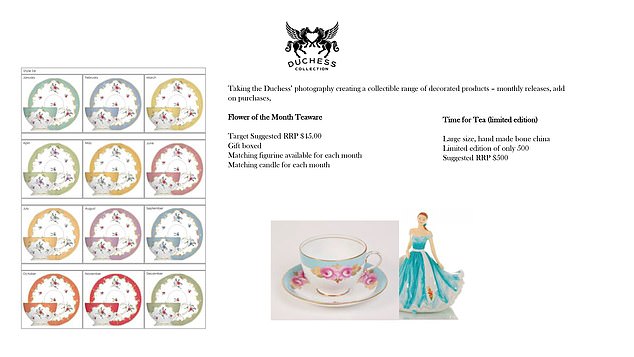 Boxed china tea cup and saucer sets, priced at £35 are planned, as is a china figurine of a rather princess-y figure with distinctive red hair, set to be released as part of a limited run of 500 and priced at £380 each. There will also be a three-tier cake stand, creamer jugs and sugar bowls in various designs. The Duchess Collection boasts teas which Fergie says she found helpful in maintaining weight loss. She adds that she has personally tried all the flavours herself. There are ‘pudding’ teas and ‘mocktail herbal teas’ called Mint Humbug and Pink Fizz

Other potential investment opportunities for backers include access to the Duchess’s range of children’s books, which reached its peak in 1994 when Budgie The Little Helicopter was made into a television cartoon.

Ginger & Moss, was incorporated in 2015 but has largely remained dormant. Its most recent accounts, to last month, show it owes more than £230,000 to media investment firm Gate Ventures, of which the Duchess was previously a board member.

Earlier this month, it emerged she had stood down from the firm, after the Mail revealed she had received £290,000 in loans over a three-month period. It is not the first time the Duchess has been mired in business controversy.

In 2009, her American lifestyle and wellness company Hartmoor collapsed with debts of more than £600,000. The following year, she was caught out in a tabloid sting offering to obtain access to Prince Andrew in return for £500,000. 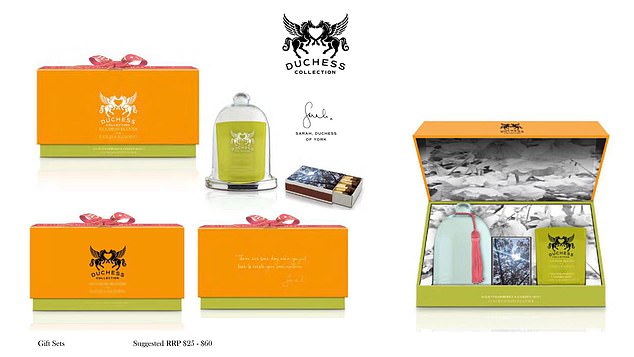 Fergie smells a profit in the market for luxury scented candles. Costing £20-£40, hers come in an orange box ‘signed’ by the Duchess with their own matches. The cover of the matchbox uses one of her own photos of the Royal Lodge gardens. Fragrances include Orchard Blossom

She called the affair an ‘error of judgment’ and said that she offered to go into business with the ‘fake sheikh’ undercover reporter rather than offering to sell access to Prince Andrew.

She also accepted £15,000 from convicted paedophile Jeffrey Epstein during her ex-husband’s notorious friendship with the disgraced financier to help pay off debts. She said: ‘I deeply regret Jeffrey Epstein became involved in any way with me. I know that this was a gigantic error of judgment on my behalf.’

The Duchess again faced adverse publicity last year when it emerged she was paid £72,000-a-year for a role at a Hong Kong-based film investment company chaired by the eccentric businessman Dr Johnny Hon. Cambridge graduate Dr Hon said the Duchess’ role was ‘mainly to introduce a few people to me in Hong Kong’.