Fernando Torres is back at Stamford Bridge with Atletico

As Fernando Torres returns to Stamford Bridge, it is only natural that the striker will reflect on a Chelsea career that became best known for a wailing cry by Gary Neville.

Co-commentator Neville could not contain his excitement as the substitute scored for 10-man Chelsea, sealing the unlikeliest of triumphs against Pep Guardiola’s Barcelona at the Nou Camp.

‘Unbelievable,’ the former Manchester United defender exclaimed as Chelsea sealed their spot in the Champions League final. It went down as Torres’ greatest contribution to Chelsea. 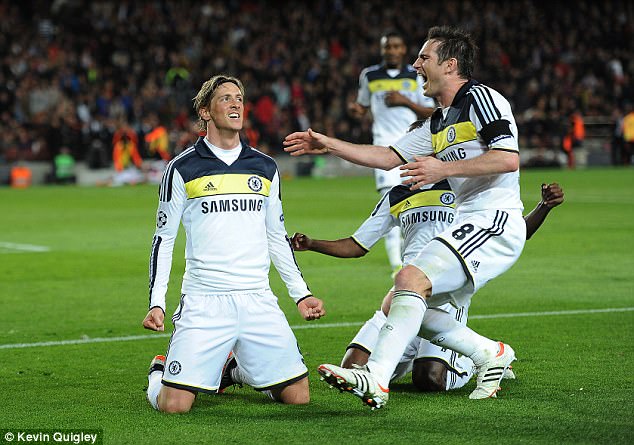 Unfortunately for him, it was one of a very few.

That goal against Barcelona was one hell of a high — yet he will also remember the shocking lows as he returns to west London with Atletico Madrid for the first time tonight.

Torres is unlikely to start in this must-win match for Diego Simeone’s visitors. Kevin Gameiro is the preferred partner of Antoine Griezmann and so Torres should be left as a super sub. How ‘super’ remains to be seen.

It is almost seven years since Torres pulled on the blue of Chelsea after becoming Britain’s most expensive signing ever. 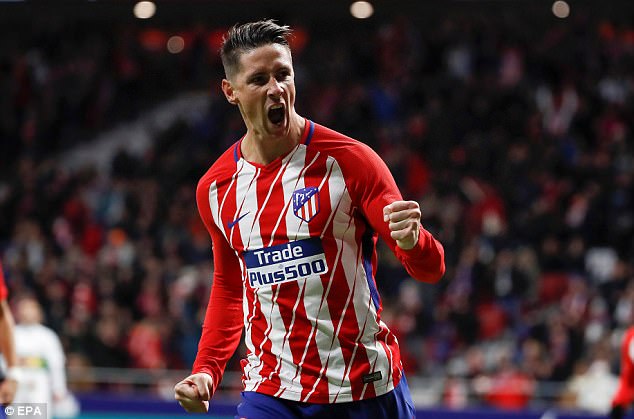 Now back at Atletico Madrid, he returns to Stamford Bridge for the first time since departing 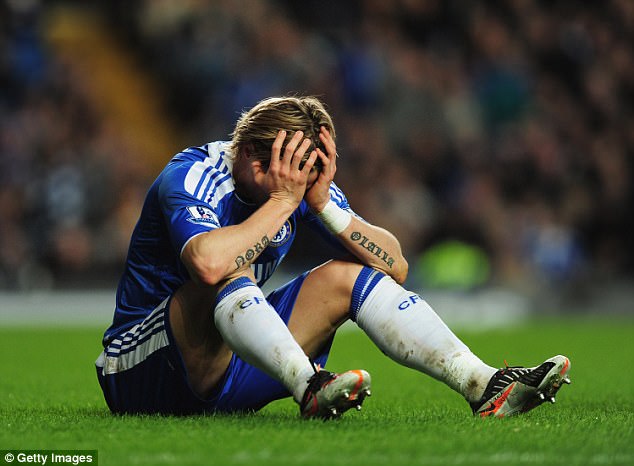 His time in London wasn’t the happiest of spells, as he often struggled in front of goal

On January 27, 2011, Chelsea bid £40million, and it was rejected by Liverpool. Four days later, on the brink of deadline day and with a rather open cheque book, Chelsea bid £50m and it was accepted.

He would make £175,000 a week in the days of the so-called credit crunch and Chelsea would soon start to feel like they made a mistake.

It wouldn’t be long before the words ‘£50m flop’ would precede his name in Premier League match reports.

Following Chelsea’s investment, it took Torres 903 minutes to break his duck. Indeed it was his 15th outing for club and country before he finally got a goal. 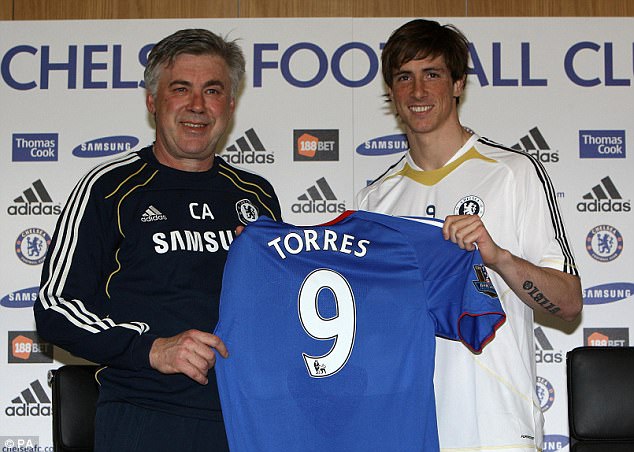 Torres joined Chelsea in the 2011 January window, but was quickly labelled a ‘£50m flop’

After seeing the transfer fee shattered for his services, Torres found it difficult to adapt to his new surroundings. Once he finally scored – the second goal of a 3-0 win over West Ham – his team-mates swamped him and the fans went wild.

Chelsea were already a goal to the good against the bottom-of-the-table Hammers and Torres had curled a fine finish into the corner beyond Robert Green. The celebrations inside a rain-soaked Stamford Bridge said it all.

The supporters hoped it lifted a weight off his shoulders. Perhaps it was all psychological. Now, maybe, the striker who terrorised defences for Liverpool with his pace and strength would turn up. 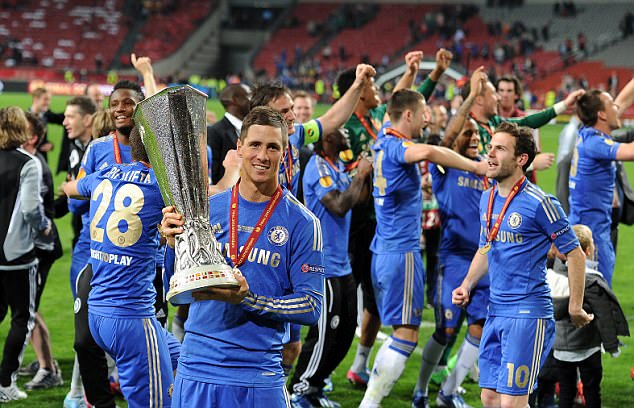 There were happier times for the Spaniard, lifting the Europa League as well in 2013

Unfortunately, he didn’t. Torres finished that season with a single strike for Chelsea. In the following three seasons, he would not reach double figures for the Londoners in the league.

Chelsea were the reigning champions when Torres was signed on January’s deadline day for £50m. In his three-and-a-half seasons at the Bridge, they finished second, sixth then third twice. He left in August 2014, then Chelsea won the title. Cursed? He may feel that way.

2010-11: Reigning champions Chelsea sign Torres for £50m in January. Scores once all season and they finish second.

2011-12: Torres scored six goals in 32 games in the league as Chelsea finish sixth. They win the Champions League.

2012-13: The striker ups his Premier League total to eight as Chelsea finish third. They win the Europa League.

2014-15: The Spaniard leaves Stamford Bridge and Chelsea are crowned champions this season.

There were other ups as well as that strike at Barcelona in the Champions League semi final, of course.

Torres was also well involved in Chelsea’s Europa League win in 2013, scoring the opener against the run of play in the final against Benfica in Amsterdam. He got six goals in that campaign.

The Spaniard collected an FA Cup medal that year too and will have happy memories of a hat-trick against Queens Park Rangers in the Premier League in 2012.

All in all, Torres got 20 league goals in 110 games for Chelsea and later claimed he saw it as a good move. For him, maybe. For the club and what they got for the cash they splashed, less so.

‘Chelsea gave me what I was looking for when I left Liverpool – trophies,’ Torres said. ‘I’ll always see it as a success.’

Whichever side of the fence you’re on, there is no doubting Torres turned out to be one of British football’s most bizarre transfer stories.

His time at Chelsea reached its conclusion in August 2014 when he moved to AC Milan on loan. After 10 appearances in Serie A and a single goal, he returned to boyhood club Atletico.

Now, they are heading for the Bridge. Some Chelsea fans may have forgotten what Torres can do as a substitute. He will look to give them a reminder later. 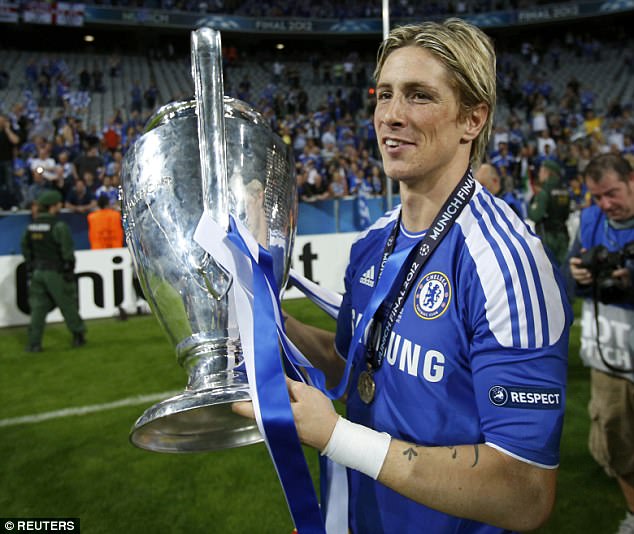 Despite the trophies he collected, Torres’s failings at Chelsea are still a real mystery