The former boyfriend of reality television star Ferne McCann has told a court that texts referencing ‘acid’ in his car where actually a special code word to his hair-thickening shampoo.

Arthur Collins, 25, is standing trial alongside Andre Phoenix, 21, for the alleged acid attack where more than a dozen people were injured at the Mangle E8 nightclub in Dalston, east London, on April 17.

He admits to throwing the acid but claims he had snatched the bottle out of another man’s hand and threw it, believing he planned to spike someone else’s drink.

Yet on April 10, a week before the attack, Collins sent a text to his sister reading: ‘Tell mum to mind that little hand wash in my car acid.’ 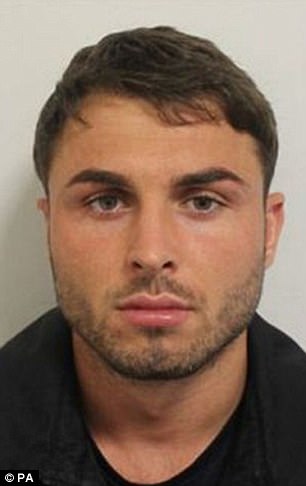 Collins (right) is the ex-boyfriend of The Only Way Is Essex star Ferne McCann (left, together)

Collins claimed the ‘hand wash’ was actually a hair-thickening shampoo which contained amino acid and coconut oil, which he was concerned his found nieces who might bite it.

He said he hid the shampoo in his car so that his celebrity partner did not find out about his two hair transplants.

Collins’ sister Chinade Rowe backed up his claims, telling the court she had massaged the special shampoo, which she referred to as ‘that acid s***’, into his scalp.

She also claimed that she massaged the shampoo into her brothers her because she had ‘better massage techniques and I could do it better for him.

‘If you try and massage your head yourself it’s not the same as someone doing it for you.’

Collins was asked what would happen if Ms McCann found a bottle of the shampoo, to which Collins was asked: ‘How good are you at misleading her? Can she tell when you are lying to her?’

‘Yes she can,’ Collins replied.

During the trial, the court was shown a number of hair products used by Collins, including Regain and Professional-C Serum.

Ms Rowe claimed she had been spiked the day before the alleged attack at Mangle E8.

Yet WhatsApp messages sent to her friends revealed she said she had ‘a few too many vodkas last night’.

When asked if she had been brought to court to lie for her brother, she replied ‘absolutely not’.

Collins was arrested several days after the incident hiding in an unfurnished flat in Northamptonshire.