A ferocious pitbull wreaked havoc in a Texas neighborhood this weekend, running wild in the streets and hijacking a police car when an officer tried to catch the dog.

An officer from the Kilgore Police Department responded to an animal control call for an aggressive pitbull named Cujo and found the dog ‘running at large’.

The officer tried to coax the dog into the back of the patrol car, which is caged, in an attempt to capture it. But the pitbull then hopped into the front seat and ‘hijacked’ the vehicle.

A ferocious pitbull named Cujo ‘hijacked’ a police car on Saturday in Kilgore, Texas by jumping into the front seat, eating a cop’s beef jerky and baring its teeth when a cop tried to get it out

‘Cujo decided he wasn’t going to jail and instead jumped into the front seat. As the Officer tried to get him out of the front drivers seat, Cujo became aggressive. The door was shut to prevent injury to the dog or Officer,’ the Kilgore Police Department posted on Facebook.

The cop had left the driver’s door open and quickly shut it after the dog became threatening, trapping it until Animal Control arrived on the scene.

‘This critter wasn’t coming out (notice his lovely smile). He was now enjoying the A/C and the Officers beef jerky,’ the department added sharing a picture of the angry dog baring its teeth from the front seat of the police vehicle. 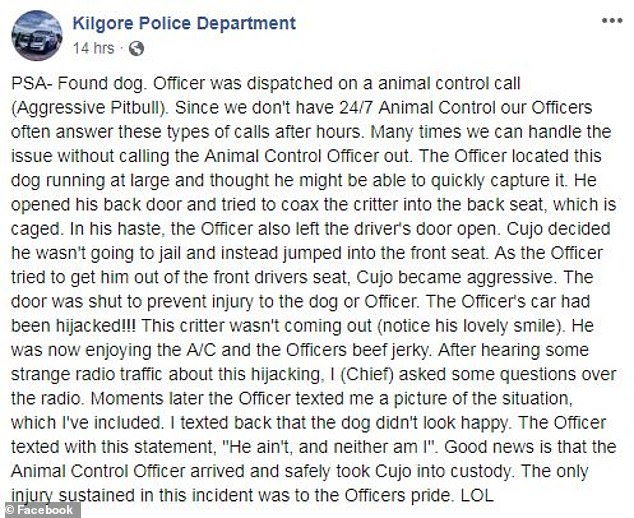 The dispatcher heard strange sounds coming from the car over the radio and asked what was going on, leading the officer to send a picture of the combative dog.

The dispatcher said the dog did not look happy and the cop replied, ‘He ain’t, and neither am I.’

Animal Control were able to take the dog into custody.

‘The only injury sustained in this incident was to the Officers pride,’ the police department joked.

The police post has gone viral racking up 2,300 likes.

‘This photo made me laugh. He looks so proud like he really accomplished something. Glad everyone was safe and could have a good laugh,’ one local commented.

‘Loved this story. Thank you Kilgore PD for all you do and never forgetting to be thoughtful and kind,’ another added.

‘Great job, Ofc. You got him off the streets and to safety… in your own way. Whatever works! Stay safe out there,’ another social media user noted.