Ferrari has today launched two new matching 200mph supercars – including an unexpected convertible – and it will be a competition to see which one wins out with fans.

The Italian car-maker took the wraps of its new 812 Competizione – in both hard-top coupe and a surprise Targa version – with prices expected either side of half a million pounds each. It described the matching pair as ‘two interpretations of Ferrari’s racing soul’.

Ferrari had previously also kept the Competizione name a secret – causing the coupe version shown last month to be dubbed ‘the car with no name’.

The cars will be produced in limited numbers: 999 coupes and 599 convertibles, all of which were already sold-out via their ‘family’ of regular customers and collectors.

The firm dodged the question of whether this would be Ferrari’s last V12 engine before the move to an electric Ferrari.

The convertible 812 Competizione A (the A stands for Aperta or ‘open’) is described as a ‘spectacular Targa-top version’ paying homage to the Prancing Horse’s ‘glorious open-top tradition.’ The Targa-top roof made of carbon fibre will open in around 14 seconds, it said. 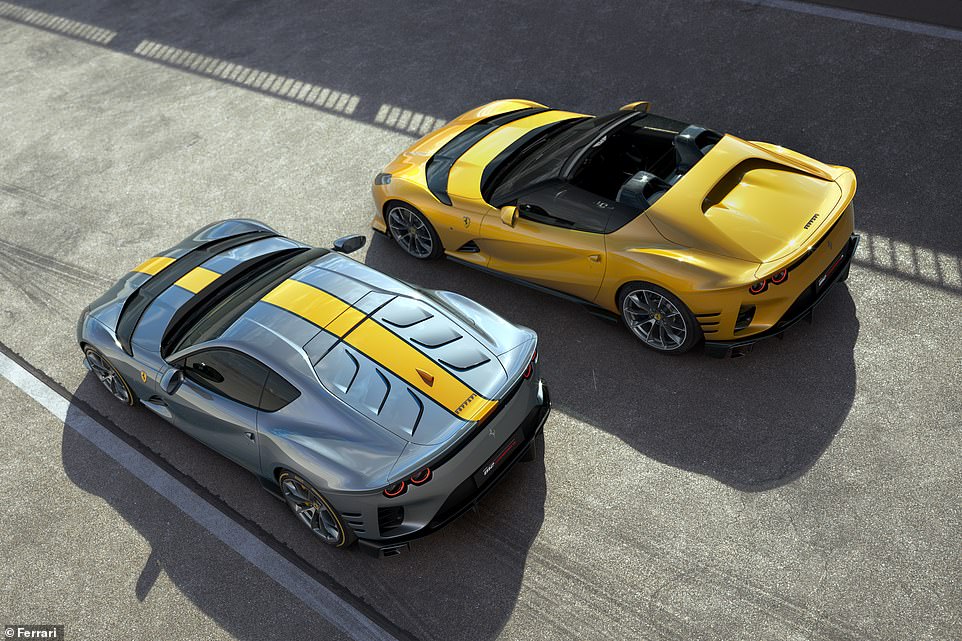 The convertible 812 Competizione A (the A stands for Aperta or ‘open’) is described as a ‘spectacular Targa-top version’ paying homage to the Prancing Horse’s ‘glorious open-top tradition.’ 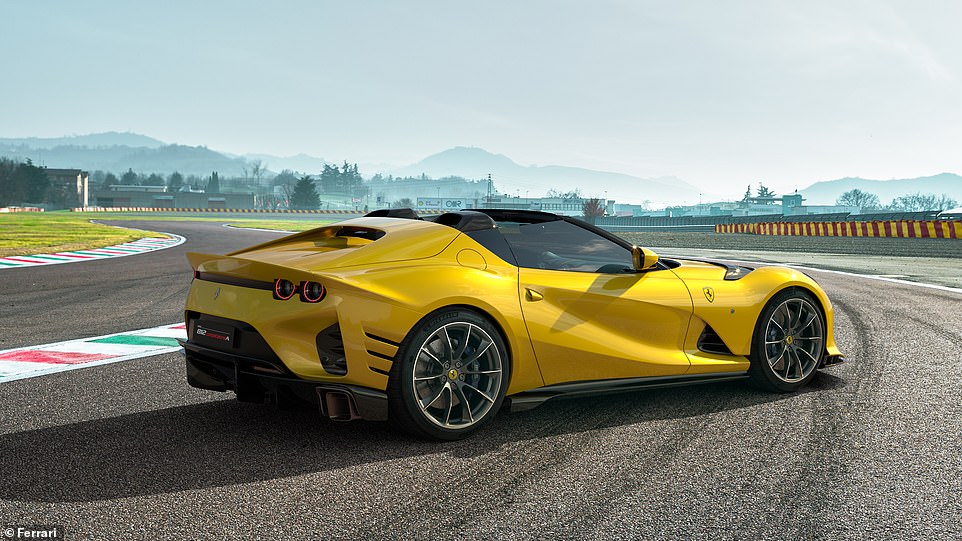 The Targa-top roof made of carbon fibre will open in around 14 seconds, says Ferrari. It will be produced in smaller numbers than the coupe – and be around £78,000 pricier

For those who take a special interest in matters Ferrari, it has lapped the firm’s fabled Fiorano test circuit in 1 minutes and 20 seconds – meaning it’s been bettered only by the latest SF90 Stradale and SF90 Spider and the multi-million-pound LaFerrari hypercar.

The lightweight limited-edition special series cars are derived from the earlier 812 Superfast models and were launched globally online from the firm’s recently-opened GT Sporting Activities Department located alongside the Fiorano track and began with the 812 Competizione completing several laps of the circuit.

Ferrari said: ‘This duo of cars is dedicated to a very exclusive group of collectors and enthusiasts of the most noble of Ferrari traditions, which focuses on uncompromising maximum performance. The innovative technological concepts applied to the engine, vehicle dynamics and aerodynamics have raised the bar to new heights. ‘

It promises owners who can stretch to the expected £500,000 price-tag ‘instantaneous responsiveness’ and ‘maximum fun behind the wheel and driving exhilaration.’

The 812 Competizione and 812 Competizione A are derived from the award-winning 6.5-litre naturally aspirated V12 engine powering the 812 Superfast – but enhanced and re-engineered to boost its output ‘to achieve a new record red line.’ Maximum revs are now 9,500 rpm.

‘This, together with a rising crescendo of torque delivery, unleashes a feeling of progressive and boundless power and acceleration,’ says Ferrari. 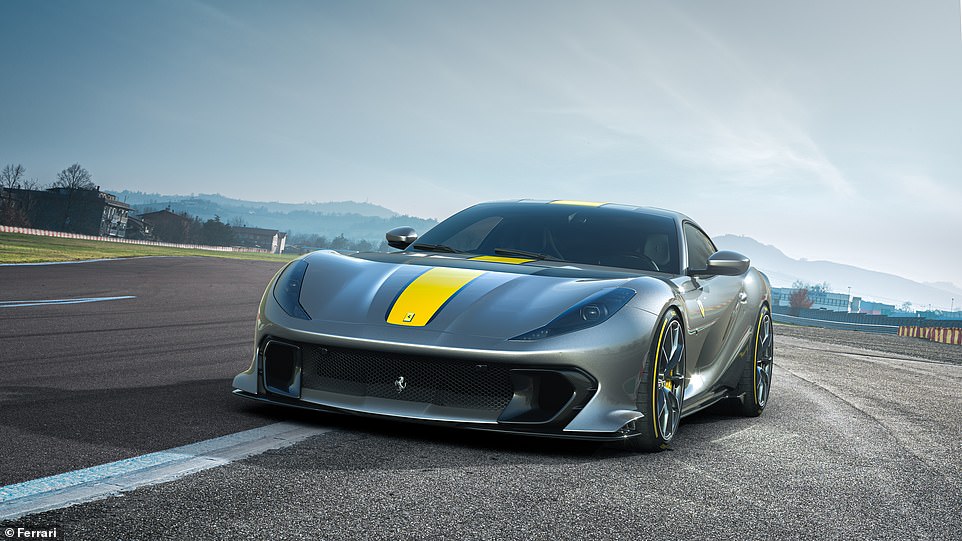 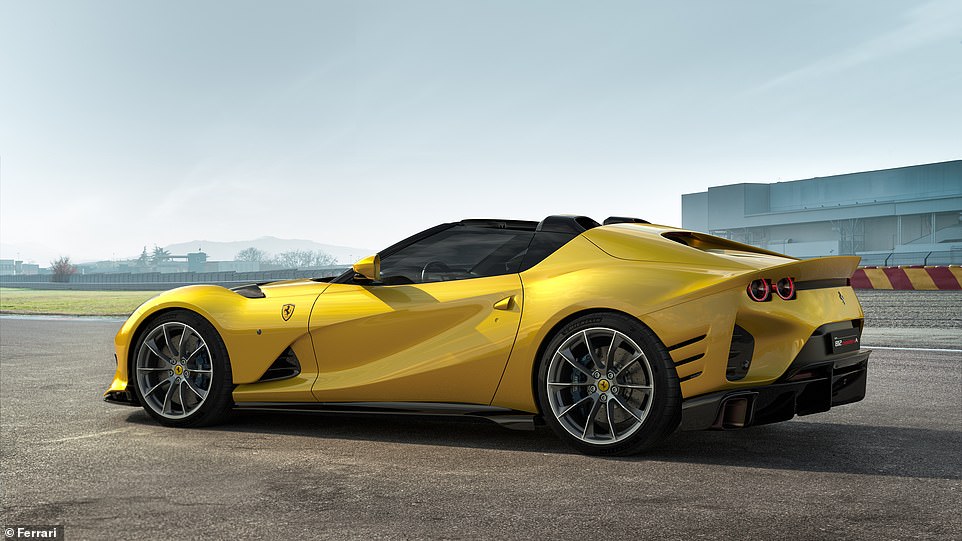 The cars will be produced in limited numbers: 999 coupes and 599 convertibles, all of which were already sold-out via their ‘family’ of regular customers and collectors

The single exhaust tailpipes each side (singles rather than twin) – are visible to underscore their function to deliver a roaring sound and emphasise car’s track-inspired character.

Tweaks to the cars’ seven-speed dual-clutch gearbox has reduced shift times by a further five per cent and made them feel sportier.

Improvements to the aerodynamics and vents translates into 10 percent more efficient cooling of the engine fluids than in the 812 Superfast.

Ferrari noted: ‘The fact that the car is faster into corners demanded an improvement in braking power.

‘Taken together these solutions hail a significant improvement in performance: optimising the air vents contributes to a 30 percent increase in overall front downforce while the new side vortex generator adds a further 40 percent.’ 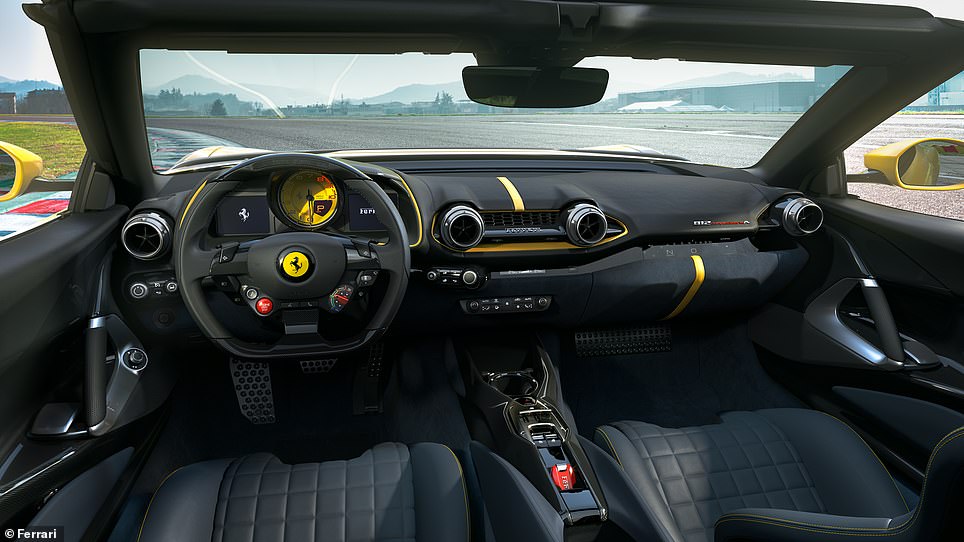 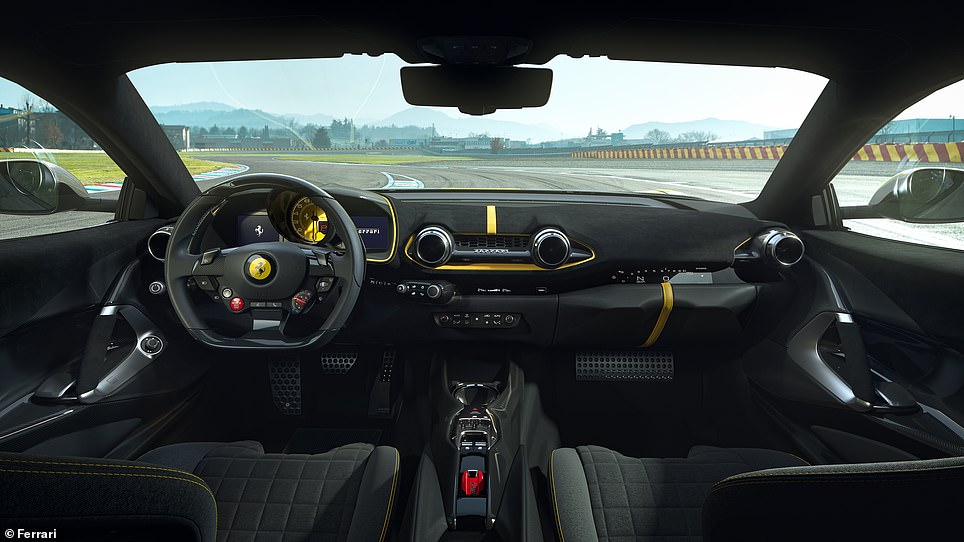 Inside, there’s not much different to separate the coupe (pictured left) from the open-top Aperta (pictured right) 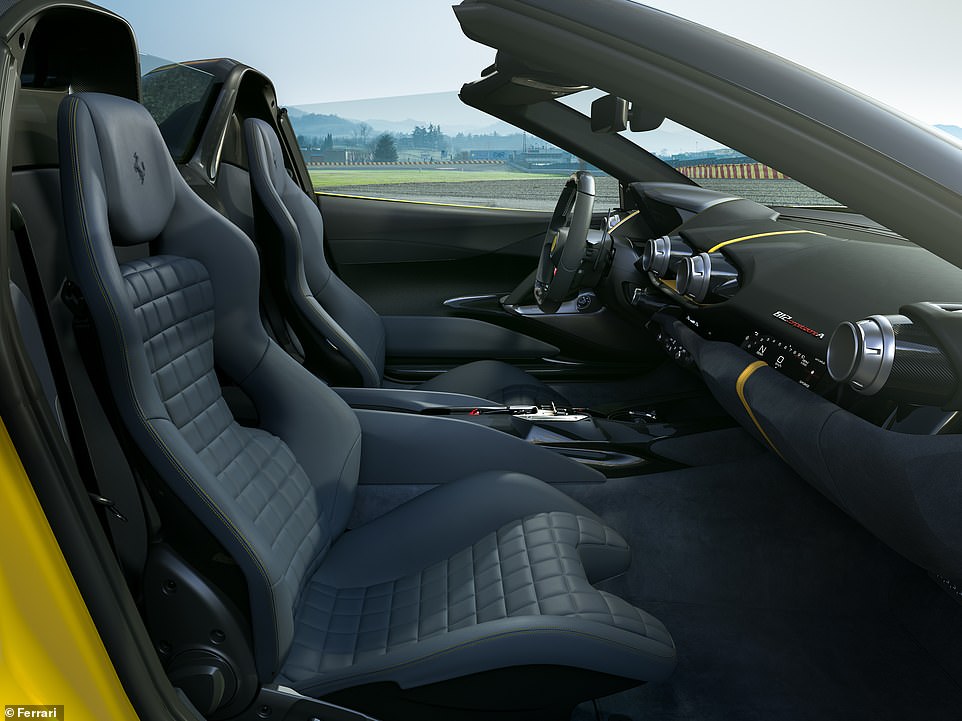 Ferrari says that great attention was paid to the design of the cockpit with the extensive use of carbon-fibre trim, lightweight technical fabrics and a reduction in sound-proofing

To improve stability and down-force, the front diffuser is equipped with a passive mobile aero system which opens at speeds of over 155mph ( 250km/h).

Meanwhile, the rear diffuser extends right across the full width of the car, producing an increase in downforce that equates to 25 percent of the total increase: ‘This jumps to 35 percent if the contribution of the exhausts blowing into the wake is also taken into account. The rear underbody, on the other hand, is responsible for a 10 percent increase in rear downforce. ‘

On the open-topped version, styling is designed to ensure maximum comfort and minimum disturbance to occupants, even when the roof is open at high speed.

Will it fit in my garage? Ferrari 812 Competizione 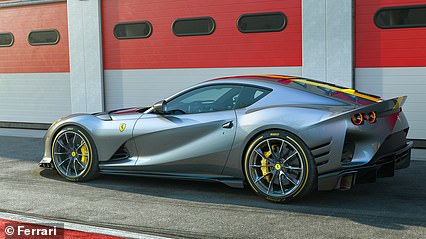 Ferrari said: ‘Particular attention was also paid to making the car as light as possible, which resulted in 38 kg being slashed off its overall weight compared to the 812 Superfast. The areas primarily involved were the powertrain, running gear and body-shell. Carbon-fibre was used extensively on the exterior, especially on the front bumpers, rear bumpers, rear spoiler and air intakes. ‘

It added: ‘Great attention was also paid to the design of the cockpit with the extensive use of carbon-fibre trim, lightweight technical fabrics and a reduction in sound-proofing. There are also dedicated sporty, lightweight forged aluminium rims and titanium studs.’

All-carbon-fibre rims are also being made available for the very first time on a Ferrari V12 and offer a total weight reduction of 3.7 kg compared to the lightweight forged 812 Superfast wheels.

Focussing on the open-topped 812 Competizione A, Ferrari said: ‘It provided the Ferrari Styling Centre with the opportunity to use the modifications required for the rear of the car to create a truly unforgettable architecture.

‘The car’s centre of gravity appears lower, particularly when seen from the side, not only because of the roof and wraparound windscreen that flows into the side windows, but also because the flying buttresses at the rear are lower than in the 812 Competizione.’

It noted: ‘With the Targa top stowed, the roll bars partly jut out above the rest of the bodywork but because they are carbon-fibre, they become secondary visual elements and so do not compromise the broader, more squat stance created by the flying buttresses. This amplifies the visual lowering of the side view.’

With the roof closed, the roll bars connect perfectly with the roof structure forming a seamless unit.

It noted: ‘The targa top is made from carbon-fibre to create a sense of aesthetic continuity with the roll-bars.’

‘In the open-top configuration, it is stowed in a compartment with the same design shape as the targa itself. Being able to stow the top at any time means the car can be enjoyed to the full, whatever the weather.’