This is Ferrari’s latest £1.7million supercar that had already sold out before it was displayed to the world at the weekend.

Called the Daytona SP3, it relaunches the iconic nameplate from the stunning road cars from the late sixties and early seventies and pays tribute to the racing machines that dominated the 24 Hours of Daytona endurance range in 1967 during Enzo Ferrari’s heated battle against the US might of Ford and its GT40.

In a fitting tribute that will have eco zealots reeling, the Daytona SP3 is powered by a naturally-aspirated 6.5-litre V12 engine producing more power than any Ferrari engine ever unleashed on the road and capable of top speeds in excess of 211mph.

Ferrari’s latest stellar supercar: This is the new Daytona SP3 that’s a tribute to one of the Italian brand’s greatest racetrack achievements recorded in the 1960s

Only 599 examples are being produced by the legendary Italian marque, each with a €2million price tag inclusive of taxes – so around £1.7million for the UK – yet all of them already pre-sold to the brand’s most loyal and deserving clients.

First deliveries are due to arrive in late 2022.

It will join the ‘Icona’ series of models alongside the stunning open-top Monza SP1 and SP2.

In fact, priority orders went to those who already own the SP1 or SP2 – or even both.

Yet the Daytona – getting the SP3 continuation digits – is not front-engined like its sister models, with the V12 engine hunkered into the middle of the vehicle. 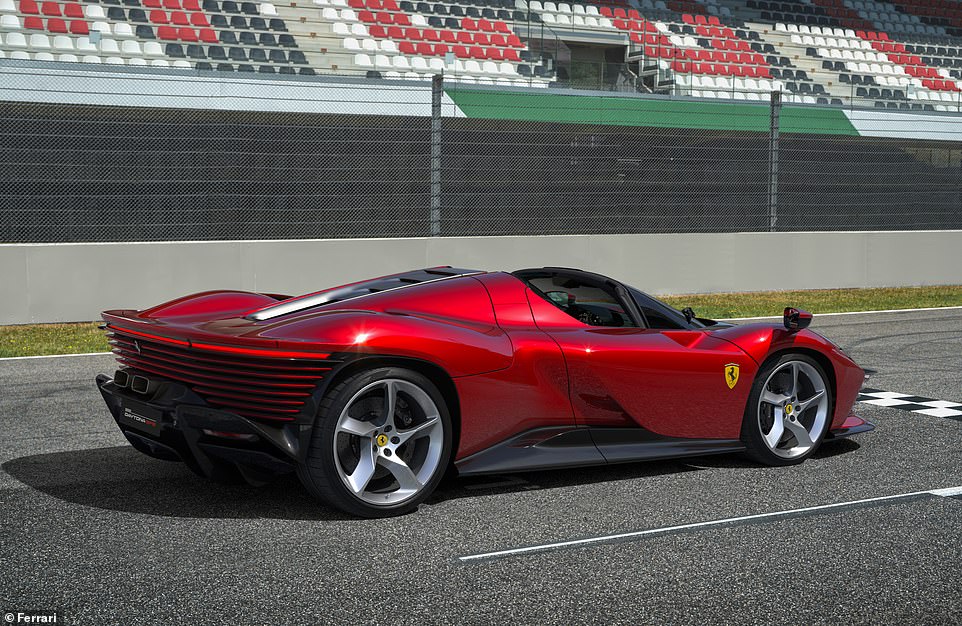 Just 599 examples of the stunning Daytona SP3 will be produced, each with a €2million price tag inclusive of taxes – so around £1.7million for the UK 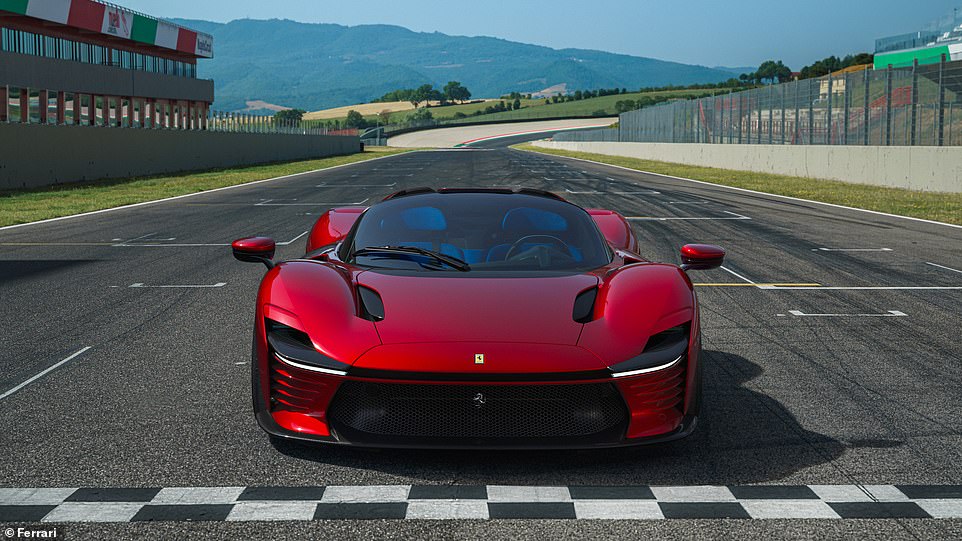 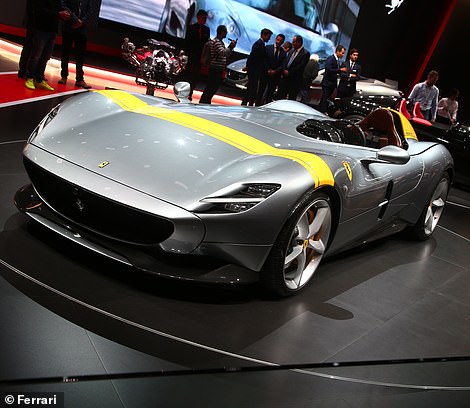 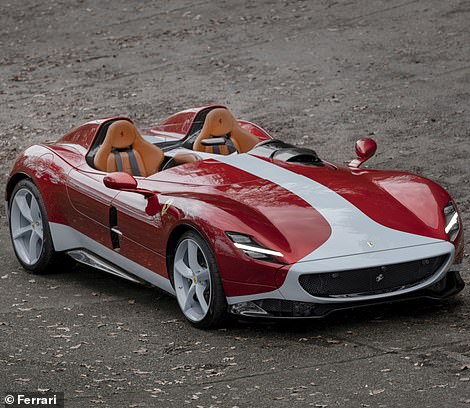 The other two Icona models are the single-seat Monza SP1 (left) and two-seater Monza SP2 (right). These are both speedsters with no roof or windscreen – and are not road legal in some regions

It’s the first road-going Ferrari to feature a mid-mounted 12-cylinder engine since the LaFerrari hybrid hypercar was produced between 2013 and 2018.

It will use the same 6.5-litre V12 motor from the 812 Competitzione, though modified with lightweight titanium conrods, reduced-friction piston pins and a lighter, rebalanced crankshaft.

Not only does this mean it packs 829bhp – more than any other combustion-engine-only Ferrari road car – but also provides what the company says is an ‘astonishing soundtrack’ – and we believe it.

Linked to a rapid-shifting seven-speed dual-clutch gearbox, it can sprint from rest to 62mph in 2.85 seconds, and Ferrari says it will continue accelerating beyond 211mph.

Unlike its two roofless speedster siblings – which are not road legal in certain regions due to the lack of a windscreen – Ferrari says the Daytona SP3 is street-legal everywhere, meaning its well-heeled customers won’t be forced to the track to get behind the wheel. 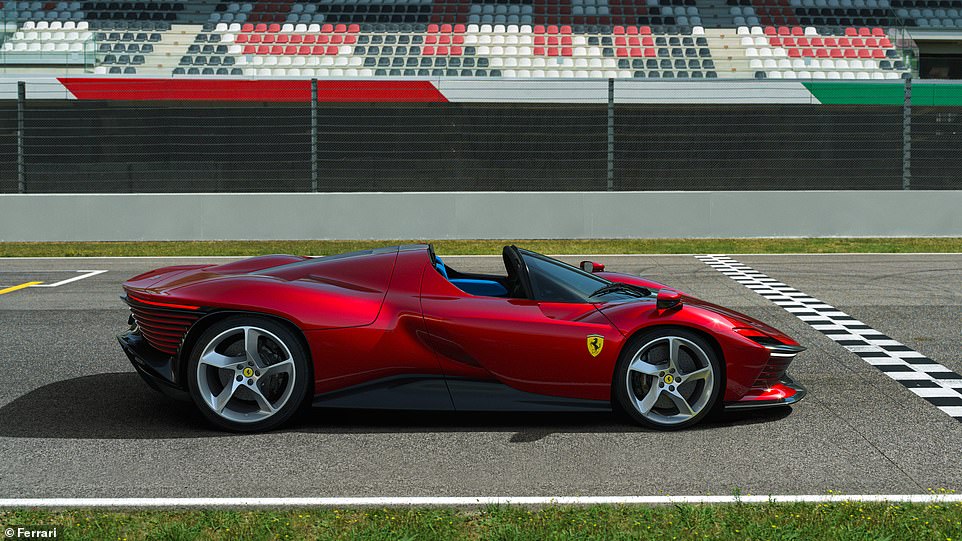 The Daytona SP3 uses the same 6.5-litre V12 motor from the 812 Competitzione, though modified so that it produces a massive 829bhp, which is the most power from a combustion engine-only road car Ferrari sells 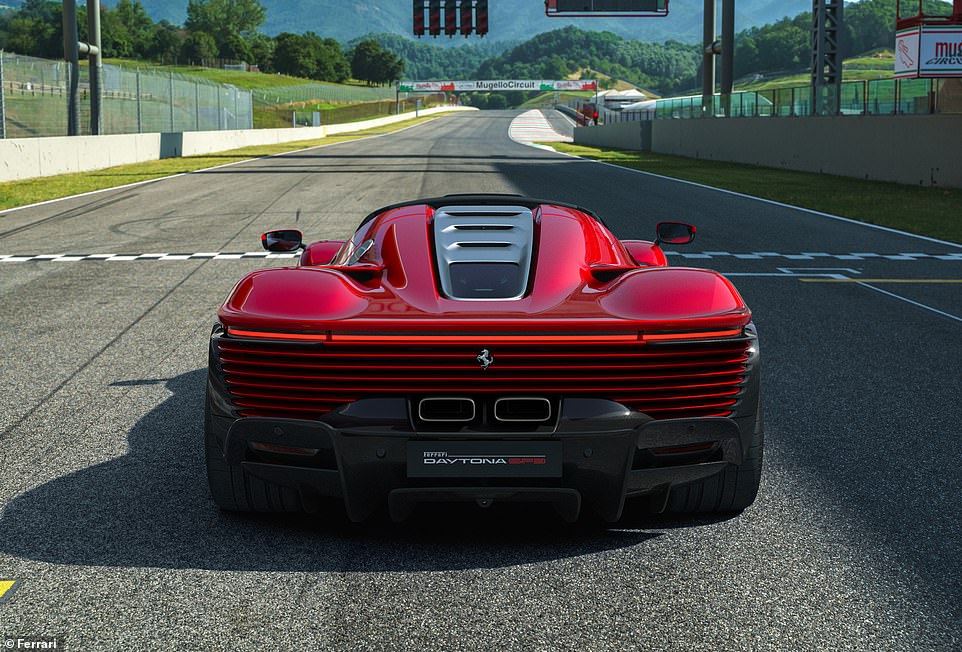 Arguably the most dramatic viewing angle of the new car is the rear, which shows these stunning stacked ‘blades’ beneath a single-strip tail light

It has been unveiled as a tribute to one of Ferrari’s biggest achievements on the racetrack, when the Italian Stallion locked out all three podium positions at the 1967 Hours of Daytona endurance event.

A 330 P3/4, 330 P4 and 412 P took the top three spots as Ferrari looked to regain its domination on circuits after the Henry Ford II had embarrassed the Italian outfit the year previous.

As depicted in 2019 film, Ford vs Ferrari, Henry Ford II invested millions of dollars into the GT40 project, which eventually culminated in the famed US sportscar taking the endurance-race triple crown in 1966, winning Daytona, Sebring, and Le Mans.

Ferrari, which demolished Ford on its home turf in ’67, describes it as ‘the golden era of closed wheel racing and an enduring reference point for generations of engineers and designers’. 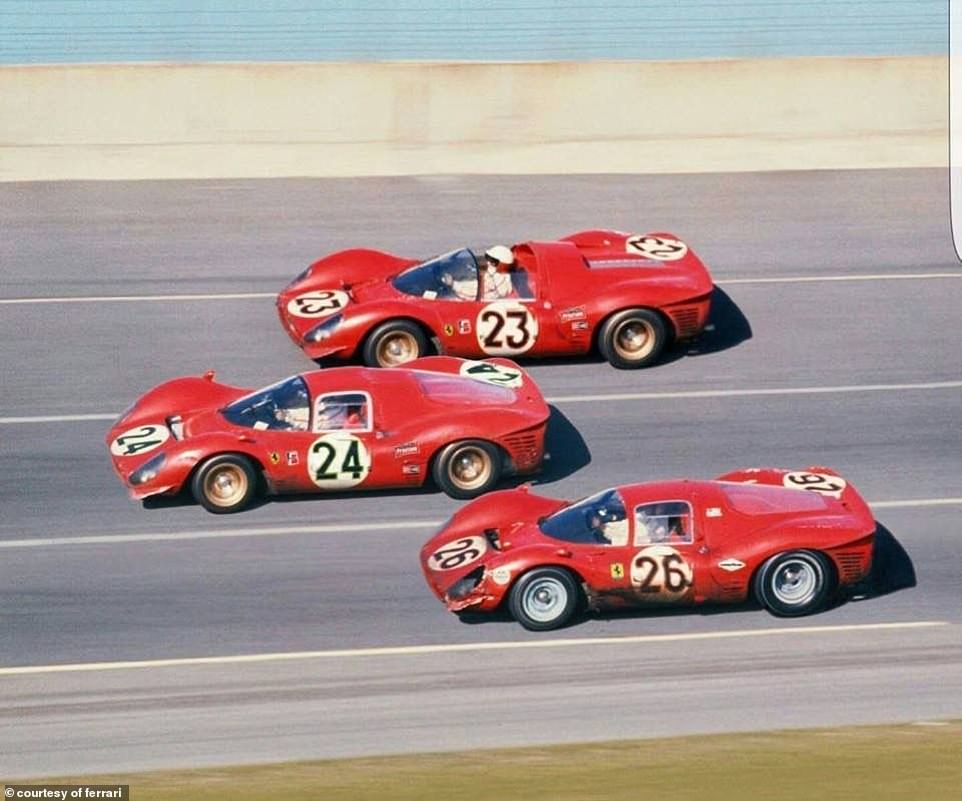 The Daytona SP3 has been named as a tribute to the cars that secured one of Ferrari’s biggest achievements on the racetrack, when the Italian Stallion locked out all three podium positions at the 1967 Hours of Daytona endurance event 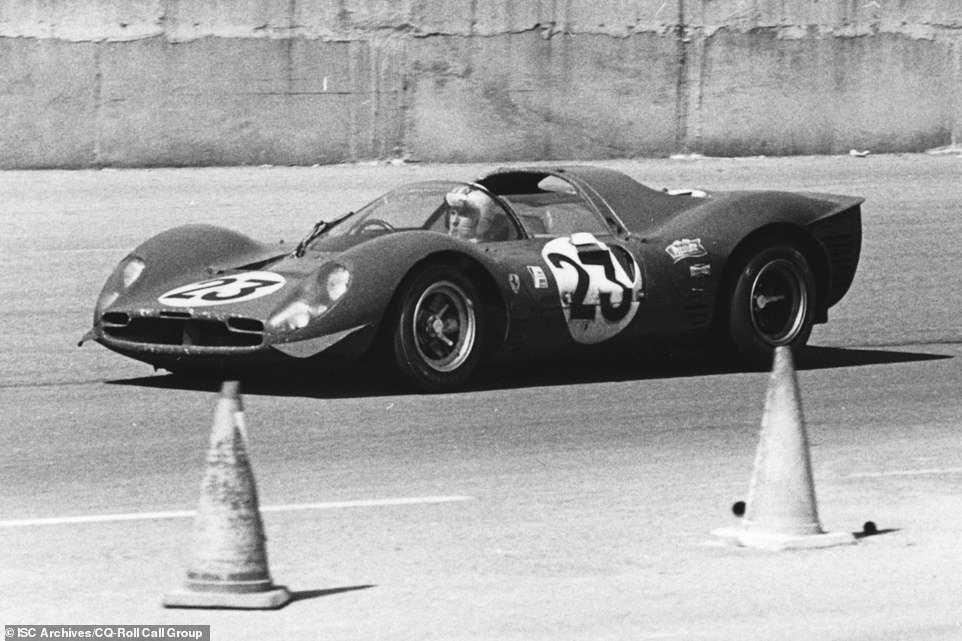 After two years of domination by Ford Motor Company, Ferrari came to Daytona International Speedway with all guns loaded for the 24 Hour Daytona Continental. Ferrari 330 P4s took home the top three positions with this car, driven by Lorenzo Bandini and Chris Amon, taking the victory 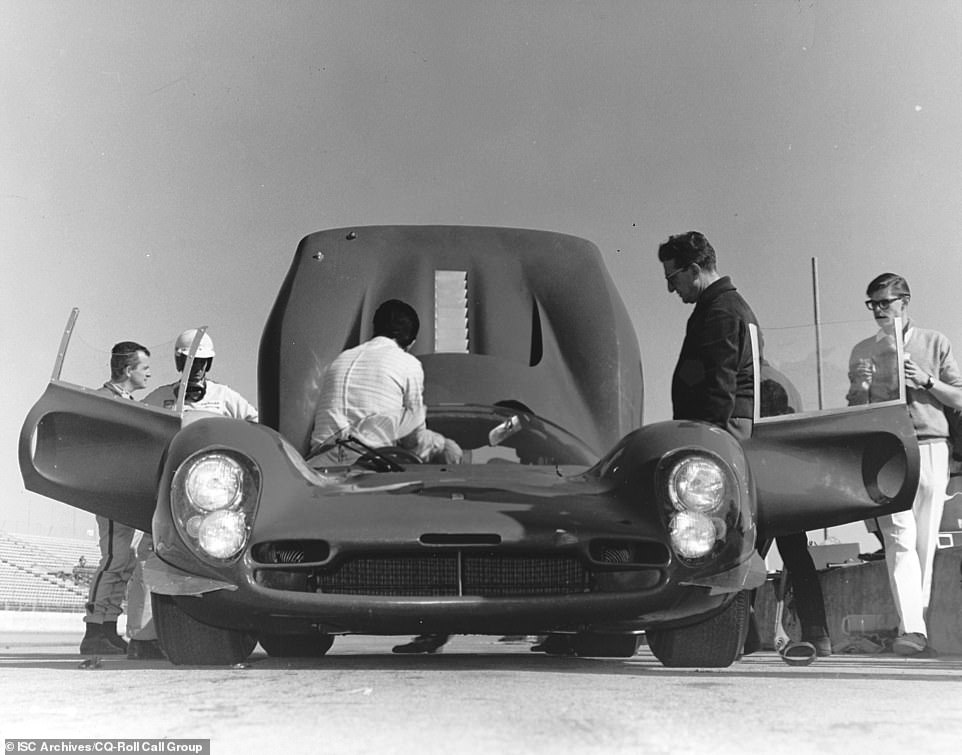 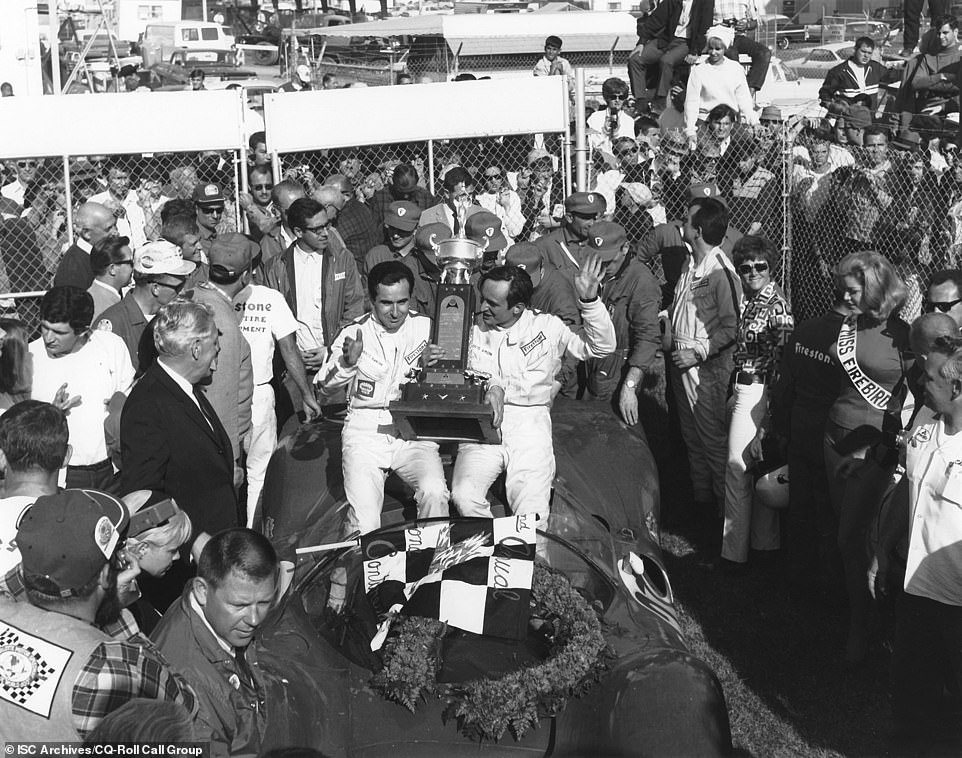 The new road car was revealed at Ferrari’s annual end-of-year bash at the Italian race circuit of Mugello.

It is packed with the latest and greatest design and tech, including a carbon-fibre construction and bodywork that clearly hints back to the 1967 race cars.

For instance, the visor-like wraparound windscreen and double-crested front wings are like those featuring on the victorious competition machines, while the moving panel in the centre of the front bumper is said to be a tribute to the pop-up headlights.

It even features butterfly doors – which incorporate an airbox to channel air into the side-mounted radiators – and a removable targa roof, just like the sixties racing machines. 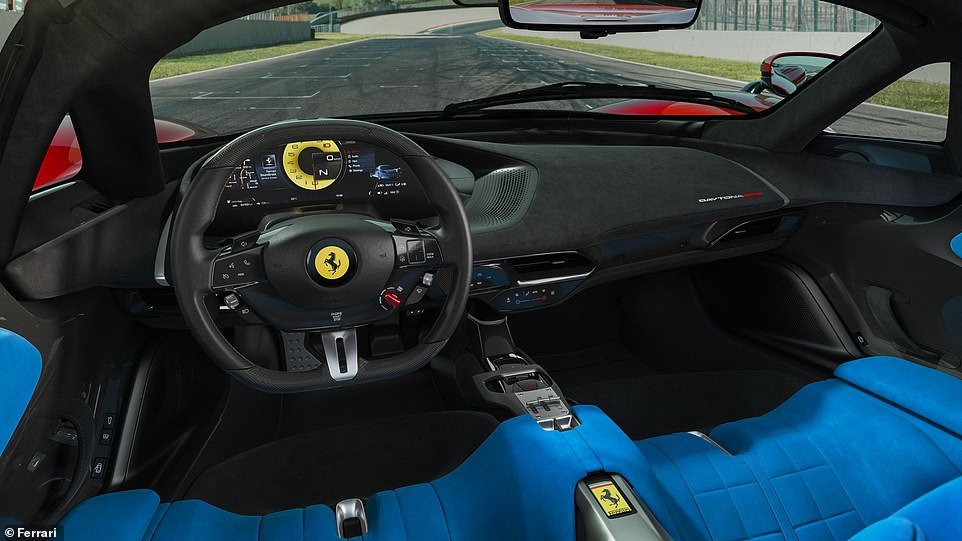 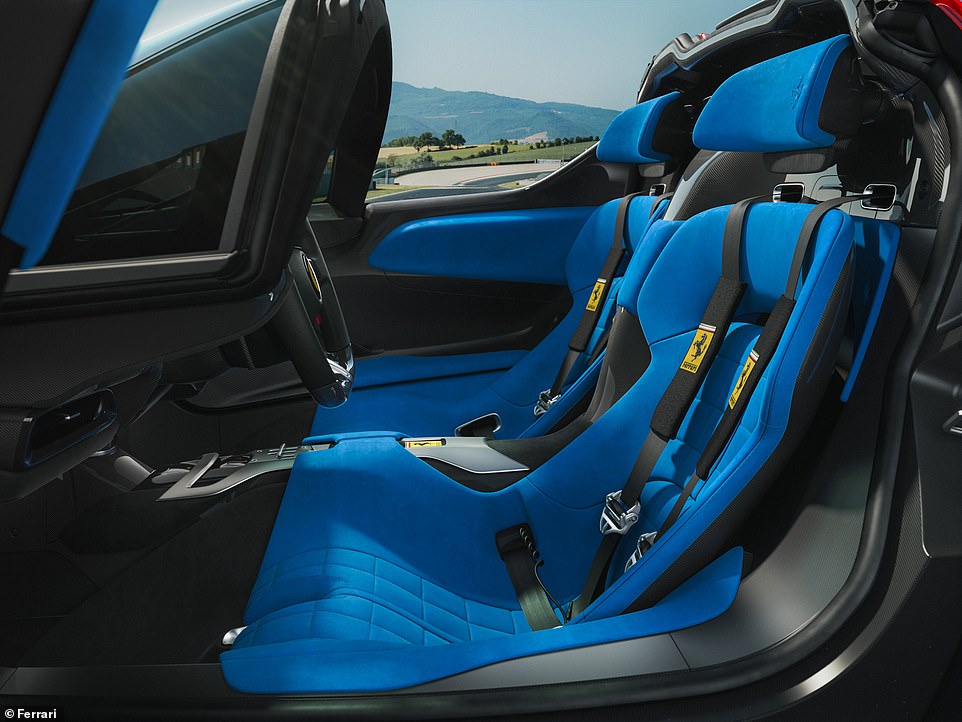 Round the back, the Daytona SP3 carries a new ‘blade’ feature beneath the wraparound light bar – a look that Ferrari claims is ‘both futuristic and a nod to signatures from Ferrari’s DNA’.

There are a number of nods to the 1960s racers inside, too, such as the blue upholstery to echo the fabric used on the old-school racing bucket seats.

How many of these limited-edition supercars are coming to the UK has not been disclosed.

You can see the Ferrari Daytona SP3 being unveiled in Italy at the weekend in the video below – fast forward to 27 minutes and 24 seconds to see it being revealed and driven around Mugello.