Festivalgoer loses a chunk of his cheek in crazed attack

Jimmy Leggett was left with severe facial injuries in the assault on Sunday afternoon at the festival in Daresbury, Cheshire

A man says he did not recognise his own reflection after losing a chunk of his cheek in a vicious attacked at the Creamfields music festival.

Jimmy Leggett was left with severe facial injuries in the assault on Sunday afternoon at the festival in Daresbury, Cheshire.

Graphic images of his injuries were shared online and the 21-year-old said that when he looked in the mirror after the attack his first thought was; ‘that’s not me’.

The aluminium fabricator had travelled to the festival with a group of friends and said he had ‘the best weekend ever’ before he was hospitalised on Sunday evening.

Jimmy said: ‘I don’t remember anything that happened, I don’t even remember being in the hospital.

‘I can remember looking in the mirror and thinking, that’s not me. I didn’t recognise my own face.’

After being taken to Aintree hospital Jimmy was given 40 stitches in his face and around 10 under his cheek.

He suffered a broken nose, cheekbone and eye socket and doctors have told him he could possibly lose the sight in his left eye.

Jimmy said: ‘I’m due to go back to the doctors to get my stitches out and when the swelling goes down they will decided whether I need surgery but its pretty much certain that I will.

‘My eye is still so swollen so they don’t know yet how affected my sight is but they’ve said there is a 50/50 chance I could lose the sight in my left eye.’

It is still not clear what caused the horrendous injuries to Jimmy’s face but he thinks it was a glass bottle.

Despite being left with potentially life-changing injuries Jimmy said the experience would not put him off attending Creamfields next year. 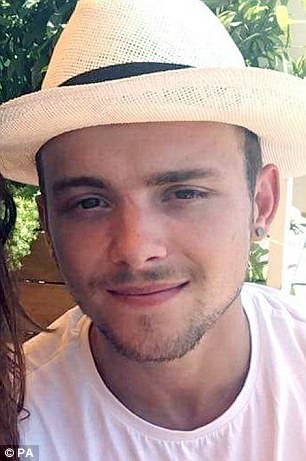 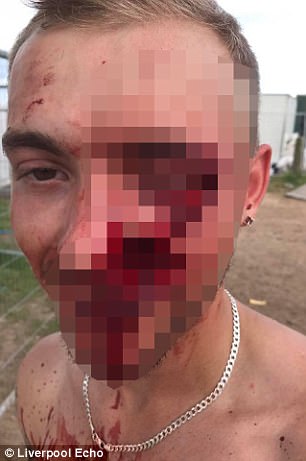 Jimmy suffered a broken nose, cheekbone and eye socket and doctors have told him he could possibly lose the sight in his left eye

He said: ‘This was my first time at Creamfields and it was the best festival I’ve ever been to. I’ll definitely be back next year.

‘I’m not going to let this kill the vibe.’

Thousands of people have shared the horrific images online in the hope of finding witnesses to the attack.

Cheshire Police earlier this week confirmed more than 150 people had been arrested during this year’s festival, mostly for drug-related offences.

They confirmed they were aware of the attack on Mr Leggett and had launched an investigation.