Four in 10 black elderly people in England have not had their coronavirus vaccine, official figures show in the first major breakdown of jab rates among ethnic minorities.

A report published today by the Office for National Statistics revealed just 58.8 per cent of black African Brits over the age of 70 had received at least one dose of either Pfizer or AstraZeneca’s vaccine by March 11.

The ONS said that, nationally, uptake in the over-70s was 90.2 per cent when all ethnic groups were included, with rates highest among white people (91.3 per cent) and Indians (86.2 per cent).

After black African Brits, the poorest rates were recorded in black Caribbeans (68.7 per cent), Bangladeshis (72.7) and Pakistanis (74 per cent).

The report, which included data from 20million over-70s invited for their jab in England, also found Muslims were the religious group least likely to take the vaccine, with only 72.3 per cent of over-70s getting one so far, followed by Buddhists (78.1 per cent).

People who were disabled were also slightly less likely to have been vaccinated compared to healthy people of the same age. The reasons for this are not totally clear.

Ben Humberstone, head of health analysis and life events at the ONS, said: ‘Vaccination rates are markedly lower amongst certain groups, in particular amongst people identifying as black African and black Caribbean, those identifying as Muslim, and disabled people.

‘These differences remain after accounting for geography, underlying health conditions and certain indicators of socio-economic inequality.’

Jab hesitancy among black, Asian and minority ethnic (BAME) people has been a theme throughout the rollout, with language barriers, a mistrust in Government and misinformation online thought to be fuelling scepticism.

The Government last month launched an advertising blitz to tackle the problem amid fears that rates will become even poorer as the scheme moves down to younger people who are less vulnerable to Covid but still spread it.

A report published today by the Office for National Statistics found just 58.89 per cent of black African Brits over the age of 70 had received at least one dose of either Pfizer or AstraZeneca ‘s vaccine by March 11 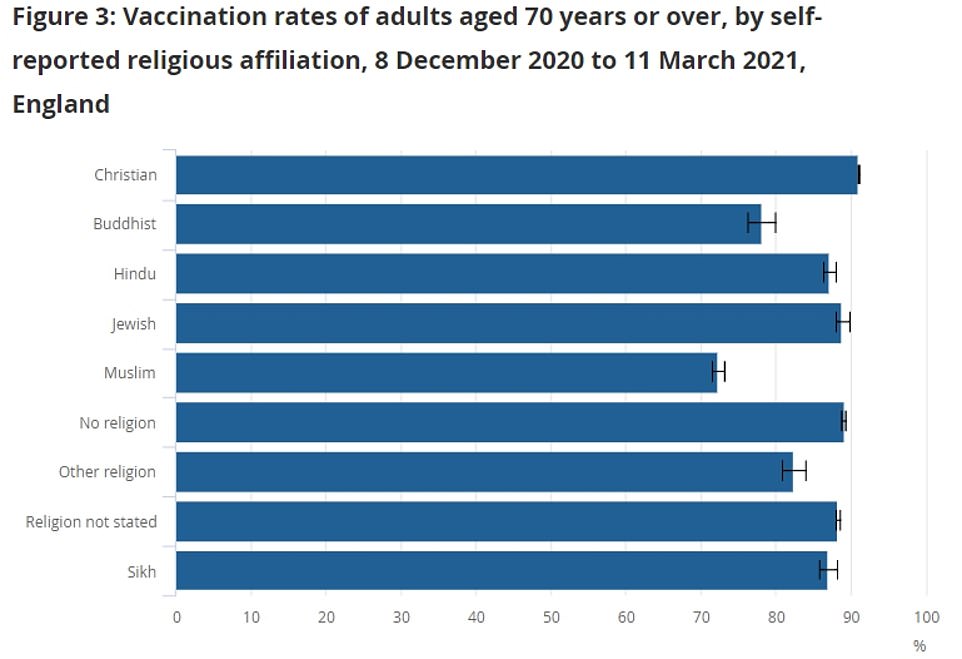 The report found that Muslims were the religious group least likely to take the vaccine, with only 72.3 per cent of over-70s getting one so far, followed by Buddhists (78.1 per cent) 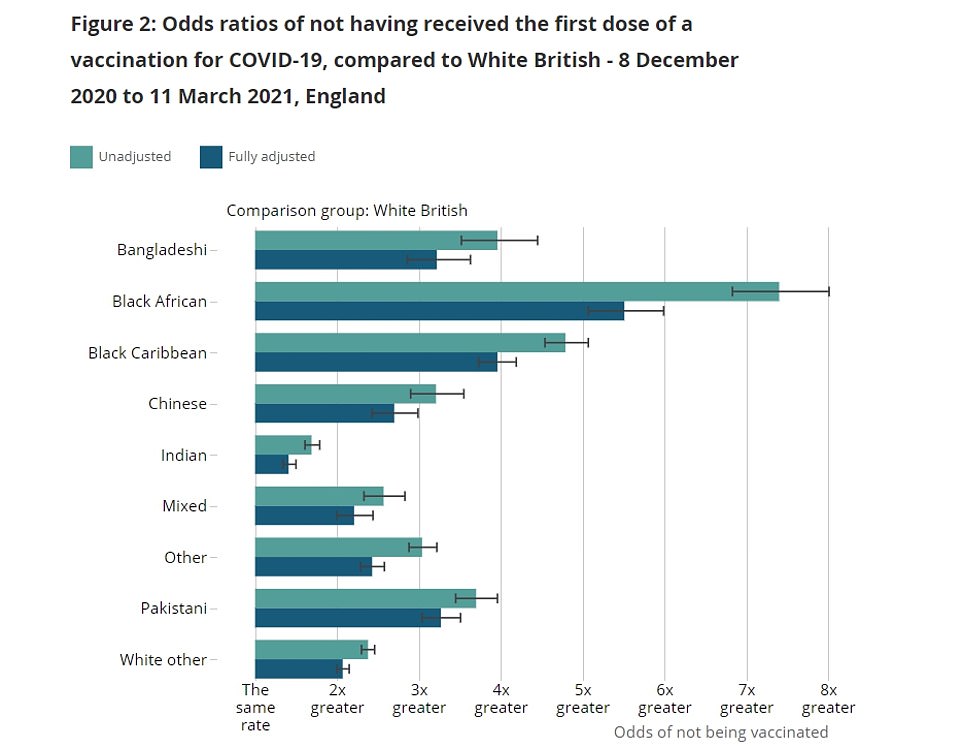 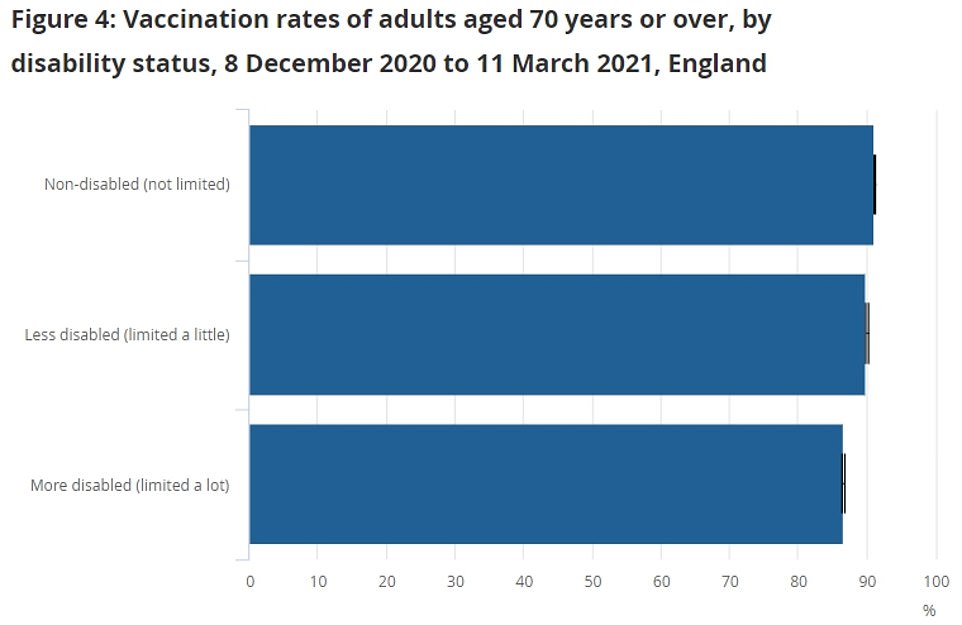 People who were disabled were also slightly less likely to have been vaccinated compared to healthy people of the same age. The reasons for this are not totally clear 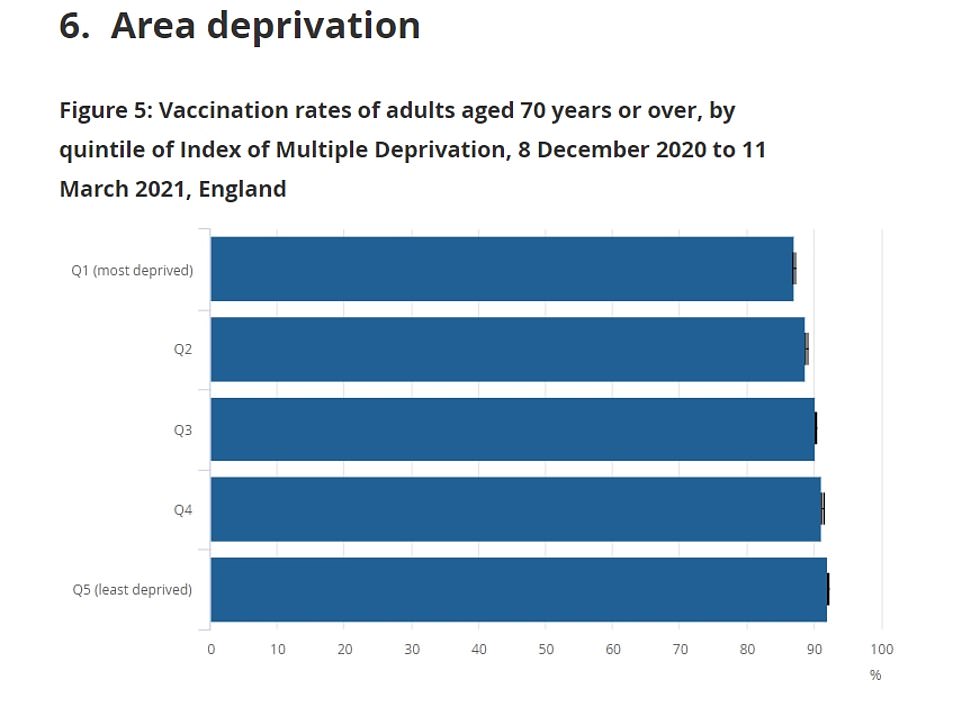 More than 30 million people in the UK – over half the adult population – have received their first Covid-19 jab.

The milestone comes as Britain’s world-leading vaccination effort gets a lift next month with the arrival of a third vaccine.

But France – despite lagging far behind in its vaccination drive – will catch up with Britain ‘in a few weeks’, president Emmanuel Macron claimed today.

In addition, 3.5 million Britons have had their second doses.

Health Secretary Matt Hancock said last night: ‘I’m absolutely thrilled that more than 30 million people have now had the jab across the UK.

‘The vaccine is saving lives and is our route out of this pandemic,’ he said, adding: ‘When you get the call, get the jab.’

Mr Macron said France had significantly ramped up the pace of inoculation and suggested that Britain’s campaign could soon struggle.

‘In a few weeks we will have completely caught up with the British, who will meanwhile be increasingly dependent on us to vaccinate their population,’ he said.

He appeared to be referring to stocks of the AstraZeneca vaccine that are produced in EU member states.

The EU has threatened to ban pharma firms from exporting coronavirus vaccines to Britain and other well-supplied countries until they make good on their promised deliveries to the bloc – a threat directed mainly at British-based AstraZeneca.

Ministers are working with more than 50 ethnic minority TV channels and radio stations that broadcast in 13 different languages to tackle anti-vaxx misinformation.

More than 90 faith, healthcare provider networks, influencers and experts from a range of communities have been recruited to hold Q&As to address people’s concerns about the Covid-19 vaccine.

Officials are also working with the BBC World Service to produce videos on key questions from South Asian groups in Urdu, Punjabi, Tamil, Gujarati, and Sylheti.

The ONS report linked vaccine data from the National Immunisation Management Service (NIMS) and its own statistics based on NHS numbers to estimate jab rates in different groups.

It included 94 per cent of the millions of elderly people who were invited for their jabs by March 11.

Layla Moran MP, chair of the all-party parliamentary group on coronavirus, said: ‘These stark figures reveal the deeply alarming low uptake of the vaccine among ethnic minority groups, who we know are particularly vulnerable to serious disease from Covid.

‘This confirms the evidence our cross-party inquiry heard last month, which underlined the need to work with local communities, leaders and places of worship to build trust in the vaccine.

‘The government and NHS must urgently step up efforts to tackle vaccine hesitancy among ethnic minority groups. That means building on some of the successful community-led initiatives we have seen, rather than relying on national campaigns from central government.’

Vaccines minister Nadhim Zahawi tweeted: ‘This is exactly why we need to make sure that nobody is left behind.

‘Real focus on the most vulnerable cohorts 1-9. Much more work to do with local communities. Seeing amazing people coming forward to help deliver the message that vaccines protect you.’

Earlier this month, Mr Zahawi revealed that misinformation about fertility and the jabs was driving the hesitancy.

He said Government focus groups and polling had shown much of the wariness toward the jabs centered around ‘issues of fertility’.

Speaking to the House of Commons Women and Equalities Committee, he added the problem was ‘proving to be sadly quite potent’ among both men and women.

Mr Zahawi admitted that data on specific rates of vaccine hesitancy and refusals were not held centrally, meaning the exact number of people turning it down was not known. Ministers had previously been relying on surveys to estimate the scale of the problem.

More than 30million Britons have so far been given at least one dose of Covid vaccines, with 3.5m having been fully vaccinated. That represents more than half of the adult population.

The world-beating vaccine rollout will get another lift in mid-April when the Moderna jab is deployed for the first time.

The imminent arrival of more than 500,000 doses of the new US vaccine – to add to millions of Pfizer and Oxford-AstraZeneca shots – will herald the expansion of the programme to the under-50s.

It offers hope that ministers may be able to invite over-40s for vaccines in the coming weeks, despite the NHS warning of a significant reduction in jabs available in England next month amid a delay to AstraZeneca shipments from India and EU tensions that could see exports blocked.