One of the best selling mattress brands on Amazon is accused of being a health hazard in a newly filed lawsuit that alleges fiberglass in the product caused customers injury.

Zinus, a Tracy, California-based furniture company, is facing a class action lawsuit alleging that the material used in its ‘Green Tea’ mattress’ fire-resistant lining mix fiberglass with modacrylic can injure users. While the material is covered by a outer-lining, the suit says that because the company does not warn against removing that covering – which has a zipper to do so – it is liable for injury that comes as a result of it.

The suit ties the exposure to itchy and irritated skin, nausea, eye injury, respiratory infections and other lung problems and even shards of glass getting embedded in the skin. It also says that some who have been exposed to the fiberglass have been forced to trash furniture and clothing that have been exposed as the material can not later be removed.

As of Tuesday morning, the products are still available on Amazon. Suits have been filed in Illinois and California since 2020, according to a CBS report.

The company earns as estimated $128 million per year in revenue each year, nearly 25 percent the sales of Casper, one of the most recognizable sleep brands in America.

Zinus products, which rake in an estimated $128 million each year, have fiberglass fire-resistant coating that is allegedly causing health issues for many users 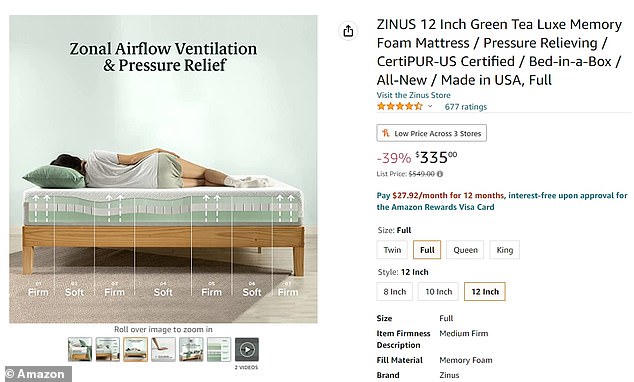 A class action lawsuit has been filed against Zinus, whose ‘green tea’ mattresses are among the best selling products on Amazon

In a website set-up to recruit plaintiffs for the class-action suit, it’s alleged that: ‘the defectiveness of the mattress lies in the presence of a zipper on the outer cover of it, which indicates to the consumer that there is nothing wrong with removing it for laundering.

‘The labels of their mattresses state that they contain 62% fiberglass but fail to warn people against removing the outer cover so as not to expose the inner layer of fiberglass.’

Fiberglass: The plastic which’s particles can cause a multitude of problems down the line

It is also often used as lining in appliances, roofing and some plastics for its soundproofing and flame-retardant capabilities

While being near the material is safe, repeated exposure to particles has been tied to many issues on a person’s skin and other internal bodily systems

Repeated exposure has been tied to skin rashes, irritation and dermatitis in some cases

Inhaling the material can also cause lung scarring, shortness of breath, coughing and other nose and lung issues

The stomach can be irritated is a person swallows fiberglass particles

The firm, which was founded in Seoul, South Korea, could not be reached for comment.

An investigation by the Los Angeles Times found fiberglass in at least one Zinus mattress.

Regulation on mattresses in the U.S. is both limited and sporadic, experts say.

‘There’s no law that says that a company has to tell you every single thing that’s in a mattress,’ Bobbi Wilding, executive director of Clean and Healthy New York, told the Times.

‘So whatever they tell you is what they’re choosing to tell you, and that leaves people incredibly vulnerable because you have to just rely on what they say.’

Fiberglass exposure has been tied to multiple health issues. Exposure to a persons skin can lead to itching, rashes, allergic reactions and dermatitis.

Some even report whole body skin cuts and shards of glass being embedded into their skin.

The small particles can be inhaled, causing lung scarring, aggravation of conditions like asthma and bronchitis, coughing and shortness of breath, among other lung-related issues.

Exposure is also linked to injury to the eyes, neuro and gastrointestinal systems as well.

‘Due to the severity of their injuries, they have to spend thousands of dollars on healthcare, medical assistance and procedures, and medication,’ the website reads.

‘To make matters worse, some of the injuries caused by fiberglass are permanent, such as lung scarring, and people who end up with this serious condition have to use special inhalers that are quite expensive.

‘As a consequence of their complex injuries, consumers whose health was affected by the fiberglass in a Zinus mattress are unable to return to work for several weeks to several months, which can take a heavy toll on their financial stability.’

The alleged financial injury goes beyond just missed work and health care bills. Plaintiffs also allege that because the particles could not be removed from cloth materials in the household like clothing and furniture, those needed to discarded and repurchased as well.

‘This requires cleanup that must be carried out by a licensed, professional team, whose cost ranges between $2,000 and $10,000,’ they write.

‘Moreover, most people whose homes were contaminated by fiberglass have to dispose of nearly everything they own since fiberglass cannot be removed from certain objects such as furniture and clothes.’