Discount chain The Works has posted impressive results following a challenging start to the year when lockdown restrictions forced its stores to temporarily close.

Booming online trade combined with high footfall in its outlets helped the company’s sales for the six months to 31 October jump by 17.9 per cent on the equivalent period two years ago.

It credited strong back-to-school trade and demand for ‘fidget frenzy’ goods like fidget spinners and neon balls for its performance, and believes it may have profited from the growth in staycations among Britons.

Store popularity: Booming online trade combined with high footfall in its outlets helped the company’s first-half sales jump by 17.9 per cent on the equivalent period two years ago

The retailer also said it benefited from consumers doing their Christmas shopping sooner than usual this year and is confident this trend will persist into the height of the festive season.

Warwickshire-based The Works, which sells stationery, toys and games, amongst other items, saw total sales plunge by a fifth during the previous fiscal year despite an acceleration in online trade.

It was forced to shut its stores by the UK Government during national lockdowns because they were considered ‘non-essential’ just like hospitality venues, clothing shops and theatres.

To try and boost trade, the company has reoriented its strategy towards strengthening its digital platform and refurbishing existing stores instead of opening new ones, and said it has achieved ‘great progress’ in doing so.

Chief executive Gavin Peck said: ‘It’s clear from these results that our products resonated extremely well with customers during the pandemic, helping them to read, learn, play and craft through lockdown.

‘Our strong sales in recent months demonstrate that demand has been maintained and customers continue to value our offer. It’s particularly pleasing to see that, whilst our online sales continue to run at almost double their pre-pandemic levels, store sales are also growing.’ 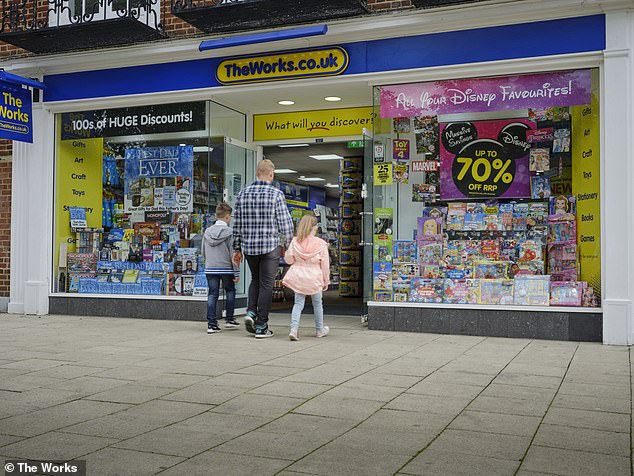 New term: The Works credited high levels of back-to-school trade and demand for ‘fidget frenzy’ goods like fidget spinners and neon balls for its performance

The firm admitted that it was currently being impacted by a shortage of haulage drivers and shipping capacity, but stated that its decision to strengthen its supply chain earlier this year means its stock levels in the run-up to Christmas were robust.

Even with higher freight costs, The Works is forecasting results for this financial year will be in line with initial expectations thanks to the higher-than-anticipated levels of trading in recent months.

Peck added: ‘Looking ahead, we have a fantastic range of products for our customers this Christmas with initial demand for them already very strong.

‘We are cautiously optimistic about prospects for our peak sales season and our ability to trade through the ongoing supply chain challenges faced by the majority of our sector.’ 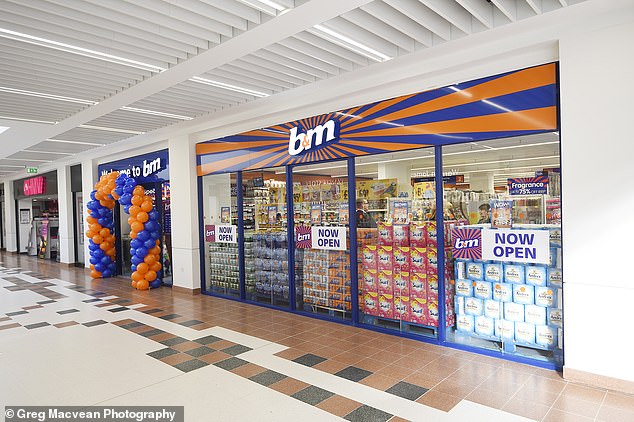 Superior position: Discount retailer B&M has had a much better pandemic than The Works as it has been allowed to keep its stores open in the UK during strict lockdown period

B&M has had a much better pandemic than The Works because it has been allowed to keep its stores open in the UK during strict lockdown periods and is planning to launch another 45 stores this year.

It returned £3.7million in furlough money to the exchequer and waived £80million in business rates relief as customer numbers took off following the first lockdown in March 2020.

B&M has also been affected by increasing supply chain costs but had imported their stock earlier than it normally would and said it was fully stocked ahead of the Christmas trading season.

Shares in The Works were down 4.2 per cent to 54.6p during the late morning on Friday, though their value has still grown by more than half since the start of 2021.