The Field of Dreams game scheduled for August 13 in Iowa has been postponed until 2021.

The contest was to feature the Chicago White Sox and St. Louis Cardinals at a newly constructed 8,000-seat ballpark in Dyersville, Iowa, at the cornfield adjacent to where the 1989 movie of the same name was filmed.

The movie, which included Kevin Costner as one of the stars, was highly popular among baseball fans as well as the general audience.

Just a few weeks ago, MLB tweeted that its Field Of Dreams in Iowa was ‘looking like heaven’ 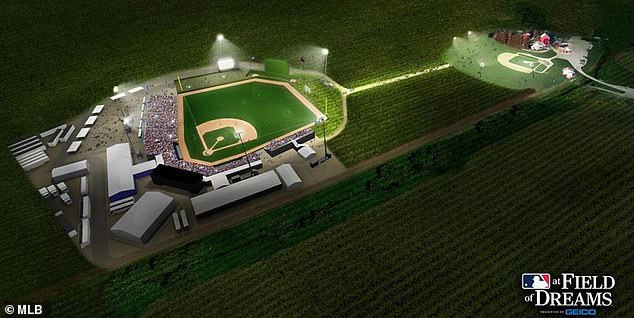 The game was to be held at a newly constructed ballpark on the cornfield adjacent to the site of the 1989 movie and had been scheduled for August 13 in Dyersville, Iowa 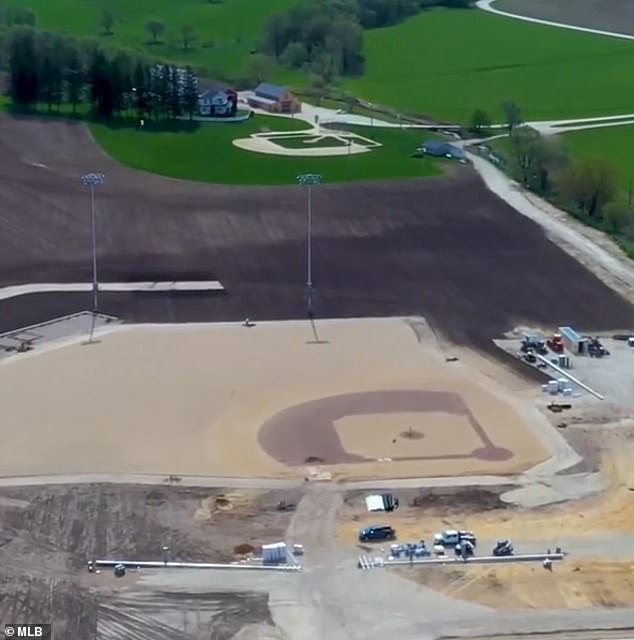 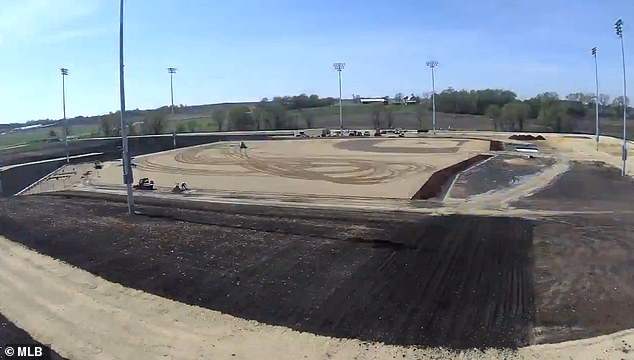 Construction of a temporary 8,000-seat stadium, about 200 miles west of Chicago, adjacent to where the movie was filmed on a diamond in a cornfield began last winter 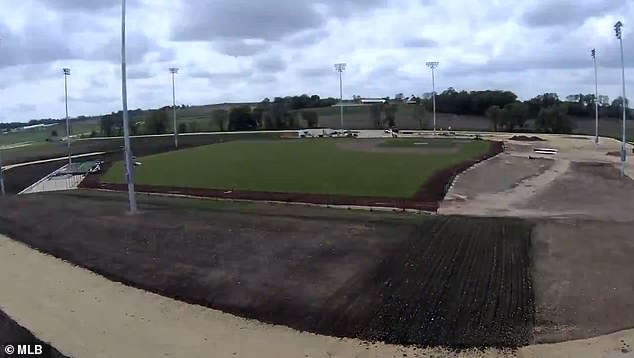 Work on the ground is well underway in this photo. Had the game gone ahead, it would have been be the first major league game played in Iowa 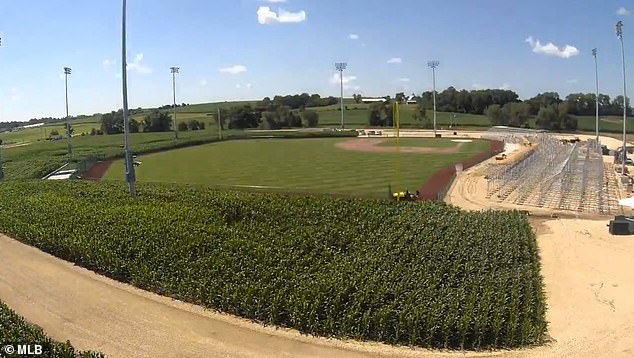 The Cardinals currently have 13 members of the organization, including six players, who have tested positive for COVID-19, although Major League Baseball hasn’t specifically indicated whether that was part of the decision.

The New York Yankees were initially scheduled to be the White Sox’s opponent but plans changed after the coronavirus pandemic delayed the start of the season and led to a 60-game schedule.

A temporary 8,000-seat stadium is nearing completion at the site, about 200 miles west of Chicago.

It would have been the first major league game played in Iowa. 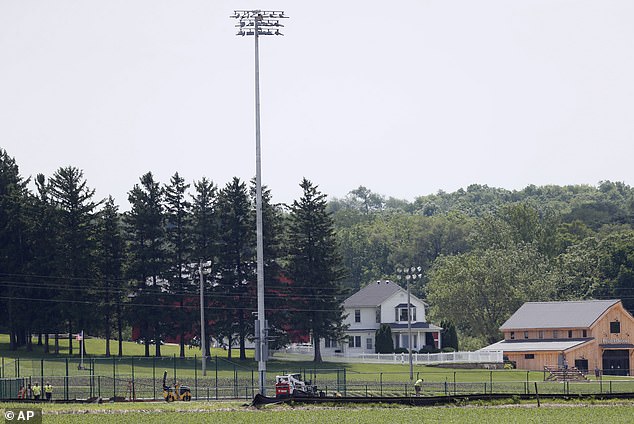 Major League Baseball announced plans for the game nearly a year ago, making it the latest regular-season game held at unusual locations.

In announcing the game, commissioner Rob Manfred said, ‘We look forward to celebrating the movie’s enduring message of how baseball brings people together at this special cornfield in Iowa.’

The owners of the Field of Dreams and residents of the 4,000-strong farming community of Dyersville had desperately hoped the game would go ahead saying that after months of isolation and loss caused by the virus, not only their area but the entire country could use a boost like seeing the game go ahead as planned. 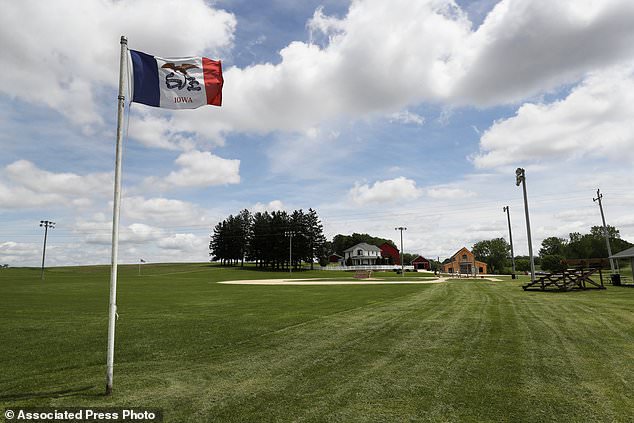 An Iowa flag waves in the wind over the field at the Field of Dreams movie site in Dyersville, Iowa. The St. Louis Cardinals were to take on the New York Yankees but now the game is off 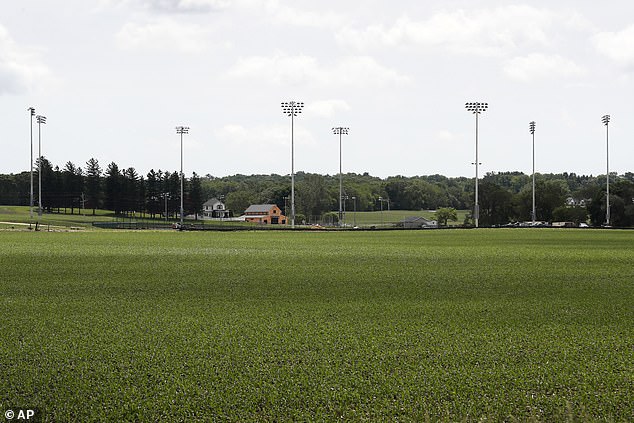 Light stands from a baseball field being built near the Field of Dreams movie site are seen. Major League Baseball built the field a few hundred yards down a corn-lined path from the famous movie site in eastern Iowa but unlike the original it’s now clear the teams won’t show 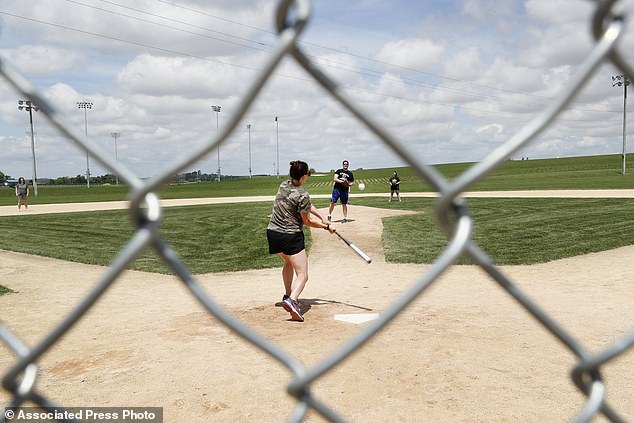 ‘For both baseball and the general public, what a match made in heaven that would be for this year,’ said Keith Rahe, now a tourism official but who previously farmed a half mile from the Field of Dreams. Rahe vividly remembers the scorching summer of 1988 when the movie was filmed. ‘Just to have something to feel good about — how do you measure that?’

‘Small town Iowa, baseball is still a big thing here,’ he said. ‘It’s kind of like we’re right in the middle of Americana, in the middle of an Iowa cornfield and what better place to play baseball?’

The anticipated matchup, officially a home game for the White Sox was expected to be a $9 million economic windfall for Dyersville and nearby Dubuque with plans for four days of concerts, exhibits and other events. 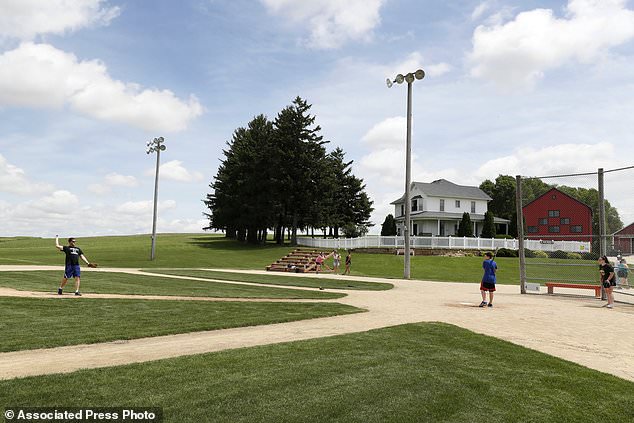 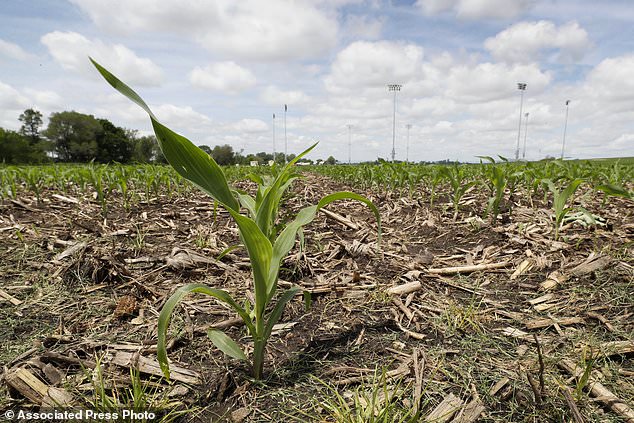 The Field of Dreams site is open to visitors, who at no charge can run the bases and see if they can smack a ball into cornstalks that now stand about a foot tall. They also can sit on wooden planks where actor James Earl Jones playing a baseball-loving author watched Ray Liotta as Jackson, a real-life player who was banned from the game because of his role in the World Series-fixing Black Sox Scandal.

Lately, visitors also have been able to gaze across the corn at towering light stands and see the deep green of a professional-quality outfield. 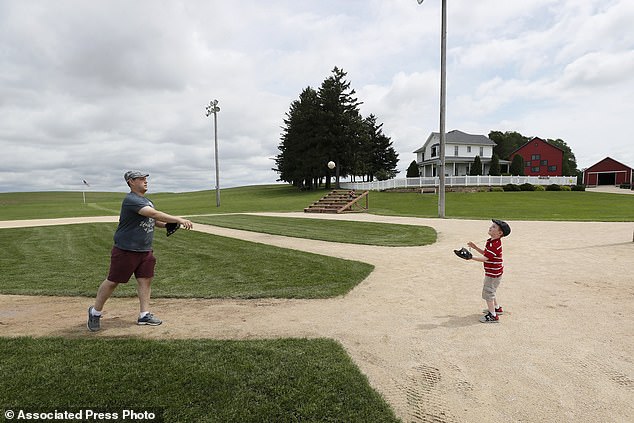 Jeremiah Bronson, of Ames, Iowa, plays catch with his sone Ben, right, on the Field of Dreams movie site 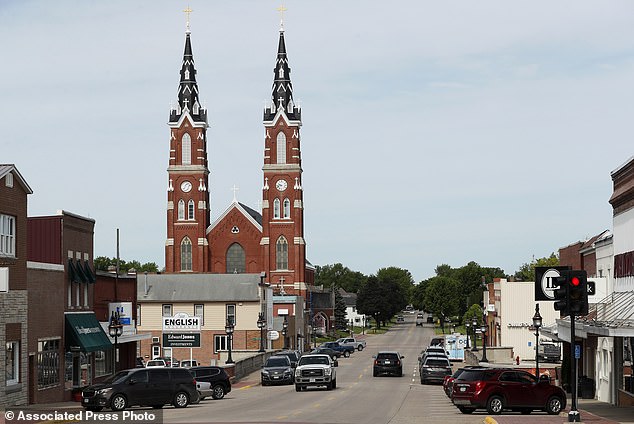 Traffic is seen on main street in Dyersville, Iowa, not far from the Field Of Dreams. A temporary 8,000-seat has been completed at the site, about 200 miles west of Chicago, adjacent to where the movie was filmed on a diamond in a cornfield. It would have been the first major league game played in Iowa

For Go the Distance Baseball, the company that now owns the Field of Dreams site and plans to build a complex of youth baseball and softball fields, the talk of playing a game began five years ago. Now, after an excruciating waiting game through the spring, the decision has finally been made to postpone until 2021.

‘These are uncharted waters for everybody,’ said Roman Weinberg, the company’s director of operations. ‘We’re all in this together and we understand that. We understand the best choice for Major League Baseball in 2020 comes first.’

Spurred by a voice telling him, ‘If you build it, he will come,’ the Iowa farmer played by Kevin Costner dutifully carved a baseball field out of his cornfield and then watched as ‘Shoeless’ Joe Jackson and his Chicago White Sox teammates strode out of the stalks and onto the Field of Dreams.

Nominated for three Academy Awards, including best picture, Field of Dreams told the story of Ray Kinsella (played by Costner) interacting with Jackson and other players who were banned from baseball in the 1919 Black Sox scandal. 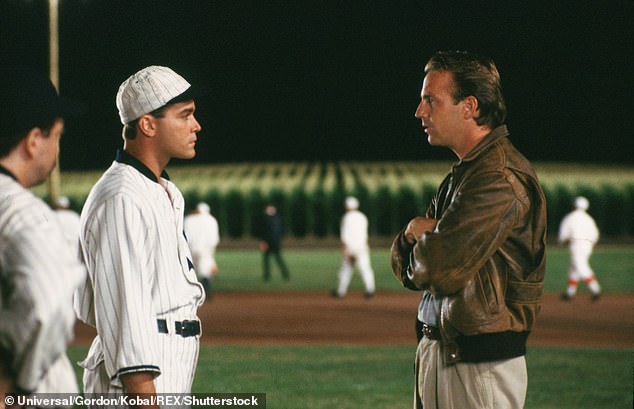 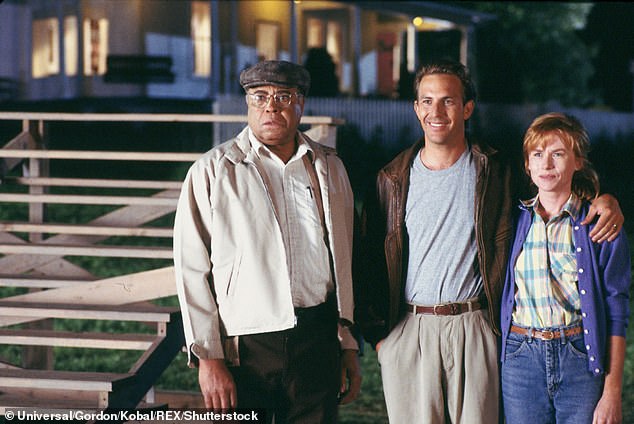 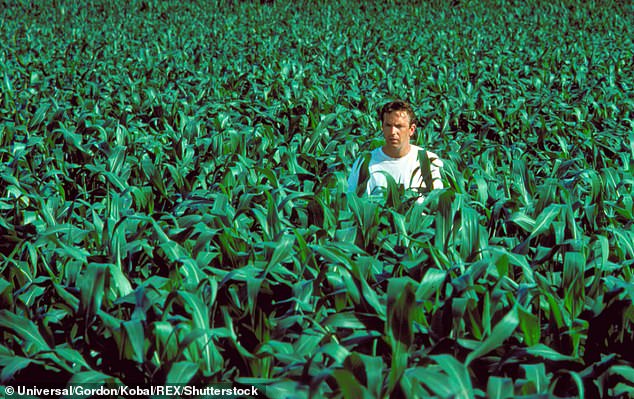 An Iowa corn farmer, hearing voices, interprets them as a command to build a baseball diamond in his fields; he does, and the 1919 Chicago White Sox come and play