The pumpkin-orange player cards from this year’s Ultimate Scream team aren’t available in packs anymore… but that doesn’t mean they’ve gone away.

In fact, if you were lucky enough to get any of them during the last week, they’re about to turn into beasts.

The spooky Halloween themed cards already have improved stats, but from today until November 1, they’re going to be even better.

For the past week or so, Ultimate Scream players have been available in Ultimate Team packs 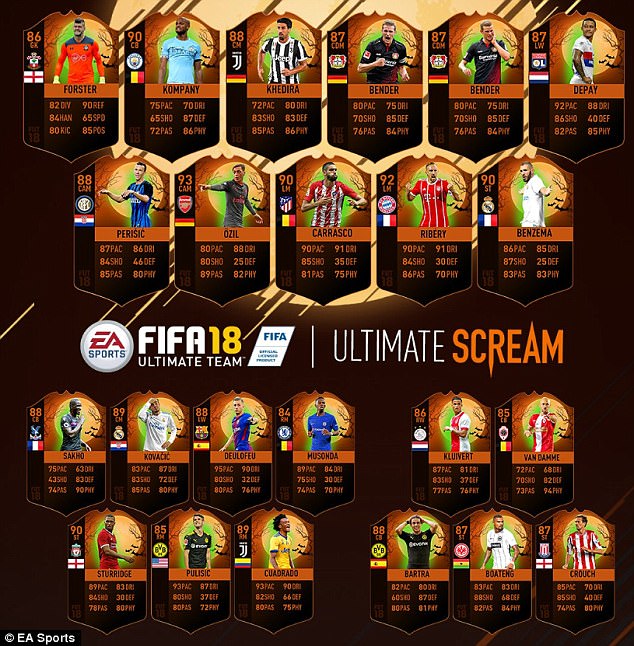 For a few days from today, the 23 players in the squad will be getting an even bigger stat boost

The scariest player, for your opponents at least, will be Arsenal’s Mesut Ozil. His overall rating has been boosted up to 93 for the next few days, with 80 in pace and shooting, 88 in dribbling, and 89 in passing.

Other players from the Premier League include Fraser Forster, Charly Musonda, Mamadou Sakho, and Daniel Sturridge.

Peter Crouch is already frighteningly tall, and now with an overall rating of 87, he’s going to be even better than normal.

He and Justin Kluivert have had the biggest temporary ratings boost.

Belgian defender Jelle Van Damme has scary strength all the time anyway, but his overall physical rating is all the way up at 94 now.

After November 1, the players will lose their boosts, but until then you can still trade them, and use them in FUT Champions and the Weekend League.

Plus, if you want to know something truly terrifying, at various unannounced times during the year, their boosts will return!