At least 15 people were shot early on Sunday at a party and two of them have died, according to local reports coming out of Chicago.

At least seven of the people shot were taken to hospitals in serious to critical condition, department spokesperson Larry Merritt told the Chicago Sun-Times.

The shooting appears to have stemmed from a party, news outlets reported.

Two of the deaths were pronounced at the scene. One person refused treatment, WLS-TV reported.

The Chicago Fire Department released this image on Sunday showing balloons and a shoe strewn across the sidewalk outside the South Side Think Tank at 6798 S. South Chicago Ave where police say at least 15 people were shot, two of them fatally 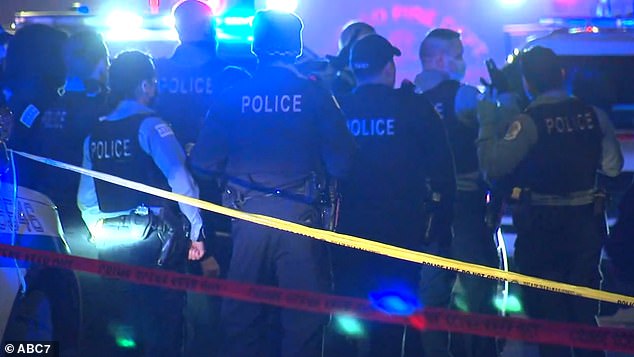 According to the police, witnesses reported a disturbance on the 6700 block of South Chicago Avenue at around 4:41am on Sunday morning.

A total of 15 people whose ages range from 20 to 44 years old were struck by gunfire, according to officials and local press reports.

‘One of the patrons began to shoot inside the building striking multiple people,’ the Chicago Police Department said in a statement.

The city fire department posted a photo on its Twitter feed showing balloons and a shoe strewn across the pavement outside the South Side Think Tank at 6798 S. South Chicago Ave.

Witnesses reported that most of the investigators were inside the building. Others reported what appeared to be a pool of blood on the sidewalk near the door of the building.

At least 15 other Chicagoans were wounded in shootings across the city over the weekend as of Sunday morning.

A 17-year-old boy was in the backyard of a residence on the 12200 block of South Bishop Street at about 4:30pm on Saturday when a gunman driving by in a dark-colored sedan opened fire.

The teen was struck in the right thigh and rushed to Christ Medical Center in Oak Lawn for treatment.

Earlier on Saturday at around 11:00am, a 32-year-old man was shot in the foot by a gunman near the CTA Red Line Station in the Park Manor section of Chicago’s South Side.

According to police, the gunman approached the victim on the 6900 block of South State Street, pulled out a gun, and opened fire.

Officials said the victim was rushed to University of Chicago Medical Center, where he is listed in good condition.

A person of interest was questioned by detectives.

A few hours before that shooting, a 27-year-old man was seriously wounded when an unidentified assailant fired a bullet into his abdomen while the victim was in his garage at around 4:40am on Saturday on South Green Street.

The man was rushed to University of Chicago Medical Center where he was listed in serious condition.

Earlier on Saturday morning, a 30-year-old man who was walking along the 7900 block of South Coles Avenue at around 1:35am was shot in the leg, according to police.

A friend rushed the man to University of Chicago Medical Center, where he is listed in good condition.

The man told police he did not see the shooter or where the shots were fired from.

On Friday night, a 33-year-old man was shot and wounded in Portage Park on the Northwest Side of Chicago, according to police.

Investigators said the man was walking along the 6000 block of West Addison Street at around 11:05pm when he heard gunshots and then felt pain.

According to police, the bullet grazed the man’s head. He was rushed to Community First Hospital, where he was listed in good condition.

Earlier on Friday evening, a 21-year-old man was shot and wounded in the Little Village section of the city’s Southwest Side.

The man was driving along the 3600 block of West 26th Street at around 9pm when someone in a passing white sedan fired three gunshots at him, police said.

He was struck in the shoulder three times, though he managed to drive himself to Mount Sinai Hospital, where he is listed in fair condition.