Fifty one people have tested positive for coronavirus after going to a Michigan bar that reopened at 50 percent capacity two weeks ago – as the number of young Americans getting infected with the virus continues to surge.

Health officials say the cluster of cases has been linked to the Harper’s Restaurant and Brewpub in Lansing in Ingham County.

All of the people with cases linked to Harper’s are between the ages of 19 and 23.

A number are connected to Michigan State University.

Of those who have the virus, none have been hospitalized and most have mild symptoms. At least four cases have been asymptomatic, health officials said.

At least two of the 51 cases are secondary, which means they didn’t visit the bar but have come in contact with an infected person who was at the venue.

Due to the spike in cases, health officials are urging anyone who visited the bar between June 12-20 to get tested and to self-quarantine for 14 days since their visit.

Health officials said that during the self-quarantine, people should stay home, self-monitor for symptoms and distance themselves from other household contacts like family and roommates.

They say that even those who are tested and get a negative result should continue the self-quarantine because of the possibility of a false negative result.

‘Given the number of cases in this outbreak, we consider this a higher risk exposure than a typical visit to a restaurant or bar,’ said Ingham County Health Officer Linda S. Vail.

‘There are likely more people infected with COVID-19 not yet identified. We need help from people who went to Harper’s during the exposure dates so that we can contain the outbreak. We need everyone exposed to stay home.’

The increase in Ingham County COVID-19 cases reported for June 22 was the largest the county has seen since May 27.

Due to the spike in cases, health officials are urging anyone who visited the bar between June 12-20 to get tested and to self-quarantine for 14 days since their visit. The spike in Ingham County COVID-19 cases reported for June 22 was the largest the county has seen since May 27

Data shows that 24 percent of Ingham County’s 888 COVID-19 cases are people aged between 20 and 29. That age group accounts for the largest group in the county’s cases

The local health department said that of the 51 cases, at least 34 are residents of Ingham County and others live in neighboring counties.

Health department inspectors say the owners of the bar were following the state-approved safety procedures related to employees, restaurant capacity and table spacing.

The owners of the bar voluntarily closed late Monday following the outbreak.

‘Our small family business takes its role and responsibility in our community very seriously – especially when it comes to the health and safety of our customers and team members,’ a statement from the bar said.

‘That’s why we have taken every measure to not only meet, but exceed, local, state and federal guidance for reopening during this COVID-19 health pandemic, which has been confirmed by the Ingham County Health Department.

‘That’s also why we have closed temporarily, to implement added safety precautions.’

Cases and deaths related to COVID-19 in the state of Michigan have been declining since mid-May. There are currently nearly 69,000 cases and just over 6,000 deaths across the state.

It comes as health officials warn coronavirus cases are climbing rapidly among young adults in a number of states where bars, stores and restaurants have reopened – a disturbing generational shift that not only puts them in greater peril than many realize but poses an even bigger danger to older people who cross their paths. 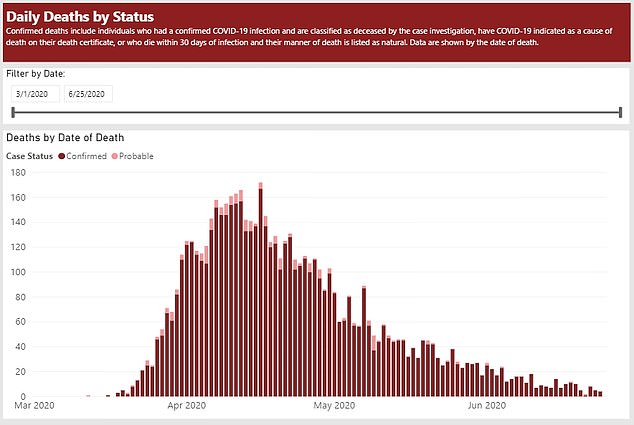 Cases (bottom) and deaths (top) related to COVID-19 in the state of Michigan have been declining since mid-May. There are currently nearly 69,000 cases and just over 6,000 deaths across the state

In Iowa college towns, surges followed the reopening of bars. A cluster of hangouts near Louisiana State University led to at least 100 customers and employees testing positive.

There and in states like Florida, Texas and Arizona, young people have started going out again, many without masks, in what health experts see as irresponsible behavior.

‘The virus hasn’t changed. We have changed our behaviors,’ said Ali Mokdad, professor of health metrics sciences at the University of Washington in Seattle.

‘Younger people are more likely to be out and taking a risk.’

Elected officials such as Florida’s governor have argued against reimposing restrictions, saying many of the newly infected are young and otherwise healthy.

But younger people, too, face the possibility of severe infection and death. In the past week, two 17-year-olds in Florida died of the virus.

Cases rose across the United States by at least 39,818 on Thursday, the largest one-day increase of the pandemic

Authorities worry that older, more vulnerable people are next.

Health experts say the fact that younger people – who have so far been less likely to be hospitalized – are now accounting for a large number of the new cases could have have an impact on the death toll in several weeks.

They point to the fact that young people could currently be infecting their elderly relatives and other at-risk people, which could drive up hospitalizations and deaths.

‘People between the ages 18 and 50 don’t live in some sort of a bubble,’ Oklahoma City Mayor David Holt said.

‘They are the children and grandchildren of vulnerable people. They may be standing next to you at a wedding. They might be serving you a meal in a restaurant.’

Figures from the Centers for Disease Control and Prevention show that almost as soon as states began reopening people 18 to 49 years old quickly became the age bracket most likely to be diagnosed with new cases.

Although every age group saw an increase in cases during the first week in June, the numbers shot up fastest among 18- to 49-year-olds.