Another stateside appearance by Turkish President Recep Tayyip Erdogan broke out in violence on Thursday after a group of protesters disrupted his speech in New York.

A violent brawl erupted at the Marriott Marquis hotel in Times Square after a demonstrator shouted ‘Terrorist!’ as Erdogan spoke to a crowd during an event organized by the Turkish American National Steering Committee.

The protester on Thursday was grabbed by bodyguards and rushed out of the hall as others in the emotional crowd pushed, shoved and shouted. 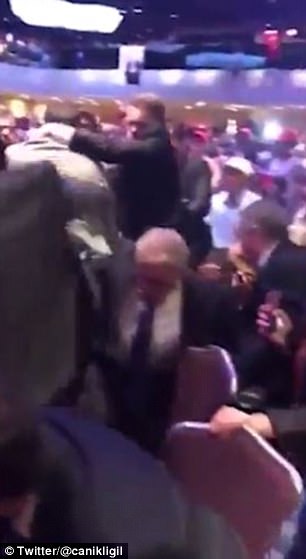 A violent brawl erupted after a demonstrator shouted ‘Terrorist!’ as Turkish President Recep Tayyip Erdogan spoke at the Marriott Marquis hotel in Times Square on Thursday 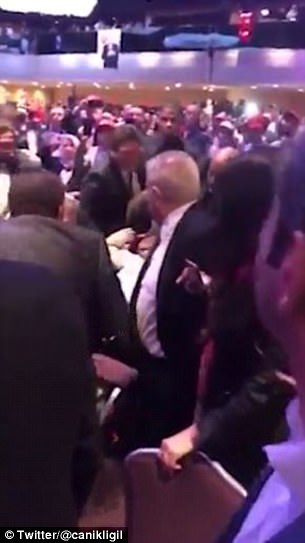 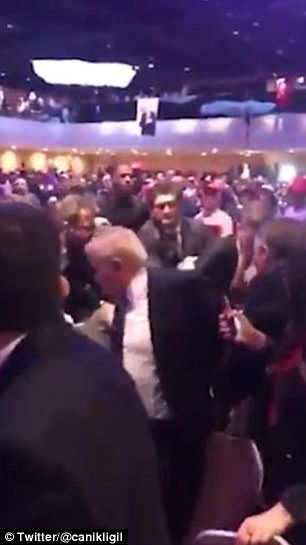 Another demonstrator unfurled a banner for a banned Kurdish group and was escorted out. Order was restored fairly quickly, and Erdogan continued his address

Another demonstrator unfurled a banner for a banned Kurdish group and was escorted out. Order was restored fairly quickly, and Erdogan continued his address.

It was unclear whether the men in suits who ejected the demonstrator from the hall were US Secret Service agents, private security guards hired for the event or members of Erdogan’s security detail.

It did not appear that Turkish security officials were involved, the US Department of State said.

In May, Turkish security officials were seen on video hitting and kicking peaceful protesters who had gathered outside the Turkish ambassador’s residence in Washington, DC, during a US visit by Erdogan.

Nearly a dozen people were injured, and 19 people were indicted last month in the beatings, including 15 identified as Turkish security officials. 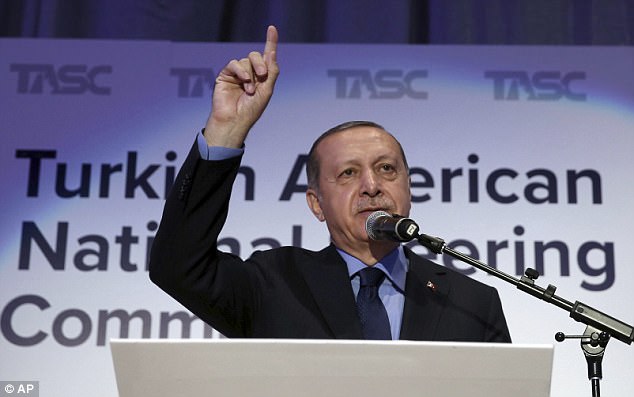 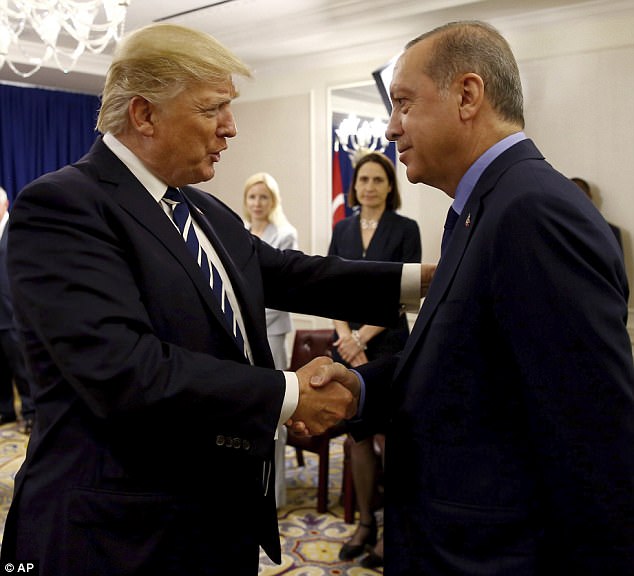 Earlier this week the US government froze arms sales to Erdogan’s bodyguards, after his aides attacked demonstrators in Washington last May.

Trump’s predecessor Barack Obama had criticized the Erdogan government’s jailing of journalists and a purge from government of those suspected of disloyalty to the veteran leader.

More than 140,000 public sector employees have been suspended or sacked under a state of emergency imposed after an attempted putsch against Erdogan last year.

‘(Erdogan) has become a friend of mine,’ Trump said as the pair met on the fringes of the UN General Assembly. ‘He’s running a very difficult part of the world.’

The effusive praise comes in stark contrast to multiple disputes between Washington and Ankara.