By Associated Press and Jessa Schroeder For Dailymail.com

A spokesman for San Francisco General Hospital says one of five people struck in a hit-and-run crash Wednesday morning has died.

San Francisco police say a driver got into an altercation with the five people and struck them with his vehicle before fleeing. It was not clear if the victims were pedestrians.

Hospital spokesman Brent Andrew said three of the victims were in serious condition and the fourth was in fair condition. He said he could not discuss the nature of their injuries.

The angry driver also attacked the group with an ax during the fight that turned fatal.

The crash occurred in an industrial neighborhood along the waterfront on Wednesday. Further investigation is underway

The man, in a while minivan, was taken into custody later at Alemany Boulevard and Cayuga Avenue in the Outer Mission.

The crash occurred in an industrial neighborhood along the waterfront a few miles from the city’s financial district.

Paul Lim, who works at nearby mechanical contractor Anderson Rowe & Buckley, told the San Francisco Chronicle a distraught bystander ran into the business asking for items to help stop the victims’ bleeding.

Lim said one person was being consoled by a friend screaming for help, and another one was moving very slowly.

Police did not immediately have any additional information to release.

This is a developing story. Please check back for updates. 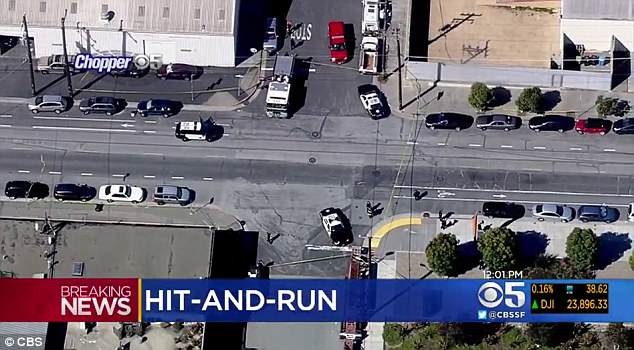 The minivan driver fled the scene but was later arrested near Alamany Blvd. and Cayuga Ave.