Fighter jet that can travel at twice the speed of sounds hits the market for $8.5 million

Fully combat ready F-16 fighter jet is being sold for $8.5 million in Florida… but you’ll need an arms license to buy it!

The sought-after plane is being sold in Palm Beach and could be purchased alongside two other F-16 vipers, a F-16AM and BM Block 20 Mid-Life-Update.

It’s a fully functioning combat aircraft and hasn’t been demilitarized.

The plane, one of the most sought-after in the world, is being sold in Palm Beach alongside two other F-16 vipers

Jet Lease, who are selling the warbird, are a private aircraft leasing and purchasing company.

They acquired the used aircraft from Jordan, who bought up dozens of secondhand F-16s from the Netherlands and Belgium between 2008 and 2017, according to The Drive.

While the jet was built in 1980, it’s has modern upgrades, including being integrated with GPS-controlled weapons, and night-vision compatible helmets. It also has Link16 data-link and Joint Helmet Mounted Cueing System (JHMCS).

The warplane can travel at twice the speed of sound, 1573 miles per hour at 40,000 feet – speeds that would mean it would take a little over two hours to travel from New York to London. 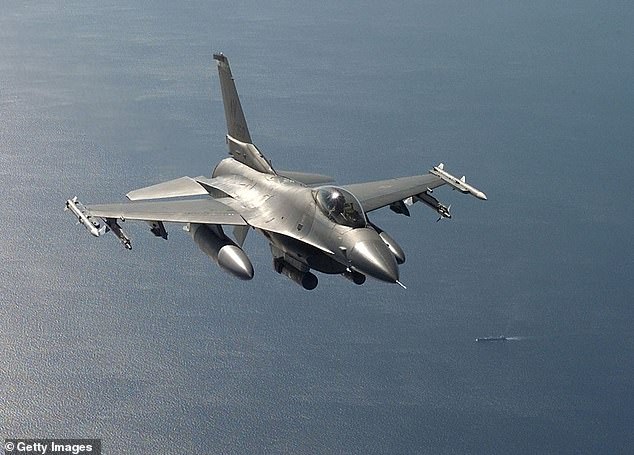 Jet Lease, who are selling the warbird, are a a private aircraft leasing and purchasing company. They acquired the used aircraft from Jordan, who bought up dozens of secondhand F-16s from the Netherlands and Belgium between 2008 and 2017

F-16s can carry up to six air-to-air missiles and has nine hardpoints for weapons payloads: one at each wing tip, three under each wing and one centreline.

However, any amateur plane enthusiast won’t be able to pick it up and fly, as it will only be sold to defense contractors that run tests for governments.

The new owner will also have to comply with International Traffic in Arms Regulations, and the Arms Export Control Act.

The US, Pakistan, Belgium, Norway, Denmark and the Netherlands are the primary operators on F-16s, while other countries buy them through Foreign Military Sales.

Sometimes the US Air Force sells older versions of the jet while it upgrades. There have been about 4600 of the jets built to date.

They are manufactured by Lockheed Martin.