Figures show where former Eastern Europeans have settled in the UK

Towns and regions with the highest influx of Eastern European migrants have been identified in government figures.

Data from the Office for National Statistics has shown the areas in the UK with the biggest proportion of settlers from the Eastern bloc.

In total there are now an estimated 2.03million people now living in the UK who are nationals of the ten Eastern European EU nations.

By far the biggest number of settlers come from Poland, with the ONS statistics showing 1million from that nation now living amongst the 65 million population of the entire UK.

It can be revealed that the highest concentration of Polish people live in Boston, Lincolnshire, where they make up one in ten of the population, a total of 10.45%, with 7,000 having settled there.

The next biggest group of Eastern Europeans are Romanians, who along with Bulgarians, were first allowed free access to the UK to live and work in 2014.

The largest concentration is in the north west London borough of Harrow, where 8.37% of the population, a total of 21,000, are Romanians.

Many of these Eastern European migrants to the UK have settled in Norfolk and Lincolnshire where they work in agriculture and food processing.

Lithuanians are the next largest group to have settled in the UK, with 212,000 making the trip here.

The highest concentration live in King’s Lynn and West Norfolk, with 11,000 living there, making up 7.33% of the population.

There are other figures for Latvia, Hungary, Bulgaria, Slovakia and the Czech Republic too. 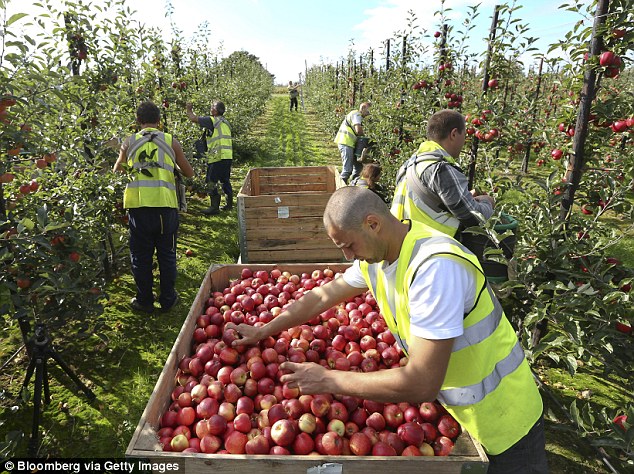 Many Eastern European migrants have found jobs in agriculture, like fruit picking, and food processing

Boston is also the town with the highest concentration of the 112,000 Latvians that have come to Britain. Some 3,000 live there, making up 4.48% of the population.

Hertsmere in Hertfordshire is the number one destination for Hungarians, where 3,000 live out of the 101,000 that have come to the UK. That works out as 2.91% of the areas population.

Harlow in Essex is the town with the highest concentration of Bulgarians, with 2,000 of the 91,000 that have come to Britain living there (2.33% of the town’s population) and Dartford in Kent is the location where most Slovakian’s settle, with 2,000 of the 89,000 that moved to Britain living there. That is 1.92% of the town’s population.

Peterborough is the place where settlers from the Czech Republic now live, with 2,000 making a home there, making up 1.03% of the population. Some 46,000 have  moved to Britain since 2004.

There is no data for settlers from Estonia, from which 11,000 have moved to the UK, or Slovenia, which has seen 6,000 leave to come here.