Filipino girl scarred by ISIS after they murdered her brother

The innocent smile on the face of nine year-old Samsia hides the nightmares of brutal ISIS-driven conflict and freak natural disaster that have scarred her young life – and left her afraid of even the sound of rain.

For in the space of a few months Samsia has been caught up in a five month siege as ISIS fighters used their sickening tactics of atrocities and fear to create a Caliphate in her home city in the Philippines and then, when she fled, survived in raging waters after her family’s new makeshift shelter was struck by typhoon-driven floods.

Twice she feared she would die. First at the hands of gunmen who executed her brother, beheaded men, took children as human shields and drove her and tens of thousands of others from homes in Marawi, a southern city that is the Islamic capital of the mainly Catholic Philippines.

And then Samsia believed she would drown during hours spent in deep, surging water when her new home was hit last December by Typhoon Tembin that left 167 dead, many of them caught in landslides.

The hours spent in the water fighting for her life have meant that she is now terrified every time it rains, fearing it will trigger more flashfloods.

As if that was not enough, she suffered another devastating blow when in the panic of fleeing Marawi, she was separated from her mother and has heard nothing of her in the past six months but clings to the hope she is alive.

Her remarkable story of survival and heartbreak was told this week to aid workers of the British-based charity Save the Children, who are providing her with psychological help, schooling and other care.

With more than 160,000 children driven from their homes in Marawi, it is one of the many chilling stories now beginning to emerge for the first time of life under the shadow of the gunmen loyal to Isnilon Hapilon, a militant on the FBI’s most wanted list and ISIS’ ‘Emir’ for South East Asia.

He formed an alliance with another local militant group and took over part of the city known now as ‘Ground Zero’ because it has been reduced to a wreck of scarred buildings torn apart, booby-trapped and bullet-ridden that resemble those that remain from other ISIS’ occupations in the Middle East.

More than 1,000 people were killed as the army of Philippine President Rodrigo Duterte battled ISIS street-by-street – around 800 of them militants, including foreign fighters – while 600,000 were displaced. The siege only ended when Hapilon was killed. Children have been left with horrendous psychological scars and their stories mirror those in Iraq and Syria. 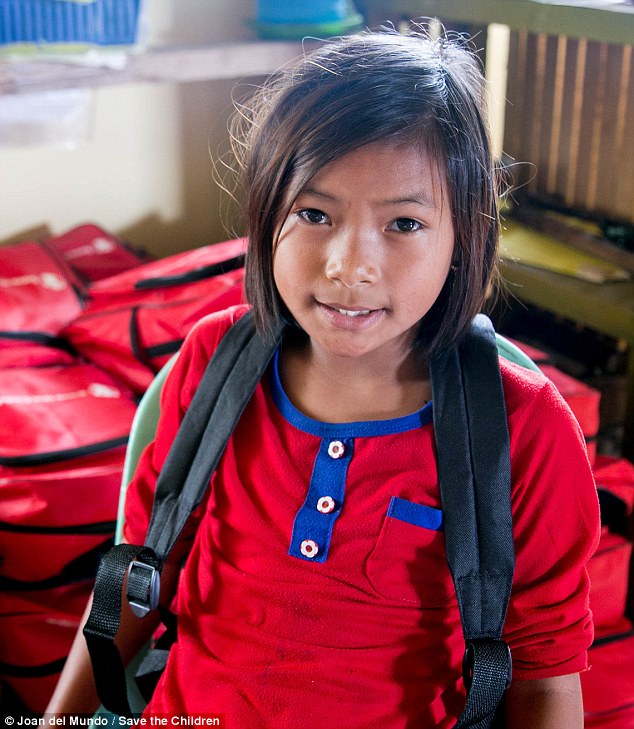 Samsia has been caught up in a five month siege as ISIS fighters in the Philippines and when she fled, survived raging waters after her family’s new makeshift shelter was struck by typhoon-driven floods

Survivors tell of executions, beheadings, boys being ordered to loot houses, people taken as human shields, men forced to fight for the rebels, houses torched and bombed, snipers terrifying people as they fled and women disappearing. Hospitals and schools were blown up by the fighters who used mosques for their snipers because they knew they would not be bombed by military planes. Survivors say Christians in particular were a target.

One mother told of fleeing past dead bodies and shots ringing overhead. She added: ‘They were killing Christians, they would kill anyone who could not speak Arabic.’

Sasha Nicholl from Save the Children UK, who was the first British woman to enter Marawi since the conflict ended in October, told MailOnline: ‘The children of Marawi are survivors of a forgotten crisis. First, they endured the longest urban conflict in recent Filipino history – a war of unspeakable horrors, which saw them loose their homes and many loved ones. Then many of those displaced had their lives turned upside down a second time – when Typhoon Tembin barrelled in last December, flooding temporary settlements and leaving a trail of destruction in its wake.

‘During my time here, I’ve seen first-hand the psychological toll of these events on young minds: children scared of rainfall, angry at their parents, prone to breaking down in tears.

‘Visiting their hometown of Marawi – seeing the bombed-out schools and destroyed homes – was a stark reminder of what they’ve been through. The city, once a town of wealthy traders, is now a ghostly wreck. The bombed out buildings look like skeletal remains; pro-rebel graffiti is scrawled over abandoned homes. We were shown a bombed-out former school and the dome of a once-magnificent mosque reduced to ribbons of mangled metal. 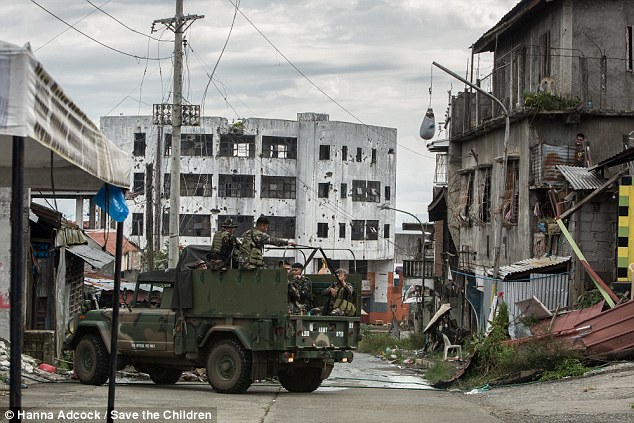 ‘As we climbed the hill out of Marawi, our driver pointed above us to the lush tropical vegetation overhead. ‘That’s where the snipers would hide. You had to drive at 100 mph to avoid being hit as you fled the town,’ he said, ‘He then pointed down the precipice on the other side of the road. ‘And that’s where they would throw the corpses.’

She added: ‘Save the Children’s priority is to return a sense of normality and hope to these children’s lives. This means getting them back in to school – and we’ve established several temporary learning spaces to cater for displaced communities – and ensuring they have the psychological support they need to thrive.’

Samsia, whose own home was destroyed by bombs, said the bullet ridden body of her brother, Abdulrahman, was returned to the family and she had watched in tears as he was buried. ‘They ordered him to steal rice for them,’ she said. ‘He did not want to so they shot him. I cried.’

She said they were ordered to leave their home and described panic in the chaos as thousands fled the gunmen on foot and in packed vehicles clutching a few belongings. Of her two escapes, she said fleeing the bombs and shooting of Marawi terrified her more than when the typhoon hit although she admitted she thought she would die in the water. ‘Our house was tied to a tree so it could not be swept away,’ she said, ‘But when the water rose, my uncles and I had to swim to escape, it was so deep, so fast…we swam so far that I lost energy and I kept thinking I had to keep going. I thought I was going to die.’

Joan del Mundo of Save the Children said: ‘Samsia has been through an utterly harrowing ordeal – and the psychological scars that it’s left behind are all too evident. This is a young girl whose life was ripped apart not once, but twice. 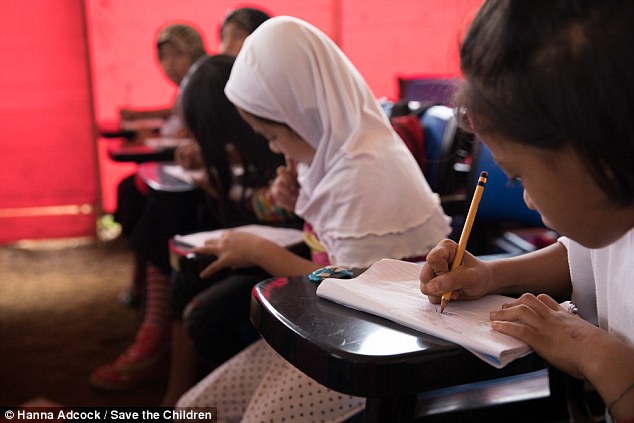 Children study inside a Save the Children temporary learning space. The centres were set up after the conflict in Marawi city left displaced children with no access to school

‘First and foremost, she is haunted by her brother’s murder and the separation from her mother. Once vivacious and outgoing, she now speaks shyly and reluctantly – and refuses to talk about the conflict. She is also terrified of rainfall, ever since the typhoon hit. A simple shower will leave her shaking with fear. She believes that at any minute she will – once again – be left fighting for her life underwater.

‘This is no way for a young girl to live. But unfortunately, Samsia is one of millions of children around the world who require psychological support to recover from conflicts or natural disasters that are beyond their control. As part of that process, getting Samsia back into school has been a priority for Save the Children.

‘Attending classes, learning new subjects and making new friends can be key to the recovery process. Education gives children a sense of routine and normality, whilst also opening up better opportunities for the future.’

In a region where tented villages now spread out on the edge of Marawi, Save the Children has set-up temporary learning places with learning kits and teaching aids while distributing back-to-school kits, hygiene kits and school uniforms to school-aged children. The charity is working with two civil society organisations to facilitate psychosocial support sessions for displaced youngsters to ensure that children are mentally healthy and build children’s positive coping mechanisms.