Film review: The Shape of Water

By Pippa Bailey For You Magazine

The Shape of Water is a slippery beast. Part girl-meets-boy romance, part Cold-War spy thriller, part B-movie horror – even part old-timey musical – it’s the kind of mythic, sensuous fairy-tale that can only come from the mind of Guillermo del Toro.

Said girl is Elisa Esposito (Sally Hawkins), a mute woman who lives alone in a crumbling Baltimore apartment and whose morning routine involves boiling eggs, taking a bath and pleasuring herself while the timer ticks. Said boy is a sort of merman, fished out of a South American river and confined to a murky tank at the Occam Aerospace Research Center, where Elisa works nights as a cleaner. Elisa sneaks into the lab (never mind the unfeasible level of access she’s allowed to this guarded government secret) to meet him for unlikely lunch dates of boiled eggs and jazz records, and the pair develop a nonverbal affinity.

The villain of the piece is the mean-jawed, Cadillac-driving Colonel Richard Strickland (played with dastardly dexterity by Michael Shannon), the facility’s electric cattle prod-wielding boss with a penchant for bullying, bigotry and workplace sexual harassment. A caricature maybe, but it’s one that is much needed to ground the more fantastical elements of the plot. Strickland is hellbent on vivisecting the amphibious ‘asset’ in the hope that his remarkable respiratory system can provide the US with an edge in the space race.

Into the melee enters Michael Stuhlbarg (increasing his odds of glory by appearing in a third award-fodder film this season, after Call Me By Your Name and The Post) as Robert Hoffstetler, a scientist-cum-Soviet spy tasked with keeping the monster’s secrets out of American hands, and, deep down, a good guy. 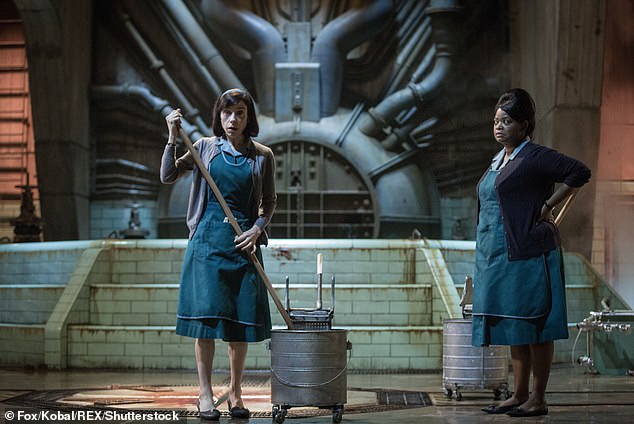 Completing Del Toro’s band of merry misfits are Elisa’s bustling, straight-talking colleague Zelda (Octavia Spencer) and middle-aged, gay neighbour and best friend Giles (Richard Jenkins). Together they conspire to spring the monster from his watery jail and sequester him in Elisa’s bathroom while they await the prime moment to release him into the wild. In the meantime, Elisa is no longer alone in the tub…

Hawkins carries the film with a generous, lithe performance as Elisa; delicate and halting yet also playful and fearless. Her ability to imbue a character with such weight and spirit without uttering a syllable must surely make lesser, more word-reliant actors quake. Doug Jones – who has played all Del Toro’s best creatures since Pan’s Labyrinth’s nightmare-inducing Pale Man – portrays the monster through full prosthetics with an elegance and humanity that could never be equaled in CGI.

Visually, it is very much a film of two halves. While Elisa’s apartment with its cracked subway tiles and dark damask wallpaper could have leapt to life from the dusty pages of a leather-bound storybook, the brutalist concrete and glass of Occam are its harsh, utilitarian foil. Uniting the two are richly rendered cinematography, an enchanting score reminiscent of Amélie, and an ethereal green light of the sort you might expect to find while diving among a shipwreck.

The Shape of Water is a ravishing, sincere and disorientating film, which, on leaving the cinema, feels immediately like something from a half-remembered dream.