A commonly-used filter to rid beer and wine of sediments and make them clearer could transfer heavy metals such as arsenic into the drinks, a new study claims.

But in lab tests the filters increased arsenic levels in the drink by as much as eight times, compared with unfiltered equivalents.

This was above the safe level of inorganic arsenic in apple juice set at around 10*g/L – 10 parts per billion – by the US’s Food and Drug Administration.

Fact: Diatomaceous earth is a naturally-occurring, soft rock used to make distilled beverages, such as beers, ciders and wines

Researchers tested a number of readily available beer and wine brands from around the world.

Although arsenic in the drinks was at levels below the limit, two US white wine samples contained 18 and 11*g/L arsenic.

But researchers at the FDA’s Centre for Food Safety and Applied Nutrition have found ways to reduce the amount of heavy metals including lead and cadmium which can be adopted by the drinks industry.

Dr Lauren Jackson explained: ‘Chronic dietary exposure to elevated amounts of the heavy metals arsenic, lead, and cadmium poses a risk to public health, and these elements have consistently been found to be present in various foods.

‘The toxicity of arsenic is dependent on its chemical state, with inorganic arsenic exhibiting greater toxicity than the organic forms.

‘Thus, it is important to use analytical techniques to determine the specific forms of arsenic in food and beverages. 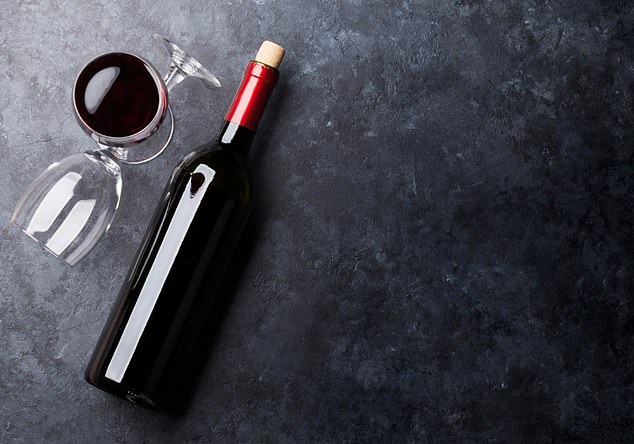 Too much of a good thing? Chronic dietary exposure to elevated amounts of the heavy metals arsenic, lead, and cadmium poses a risk to public health, experts say

‘The U.S. Food and Drug Administration (FDA) has acted to mitigate the risk from dietary exposure to heavy metals in beverages though various measures, such as by limiting lead concentrations in bottled drinking water to 5 *g/L and by seeking to establish an action level of 10 *g/kg (around 10 *g/L) inorganic arsenic in apple juice.

‘Although sources of heavy-metal contamination are still unclear, preliminary evidence suggests that use of filter aids may be one such potential source.’

How to beat a hangover without popping a pill

A team of experts at Abakus Foods have told how ginger caaspin help prevent nausea, while a hot bath can give your lymphatic system a boost.

‘This can help speed up alcohol metabolism, meaning that extra glass could pass through your body faster and you can feel ‘back to normal’ sooner. Try natural & fruity snacks to help this process. For example the jujube fruit is a great source of natural fructose and also contains potassium which can help rehydration.’

‘This has long been rumoured to help with alcohol resistance. However, the one time you can legitimately eat greasy pizza and fries is before you start drinking, and the extra oil on the intestines can help slow the alcohol absorption. It’s generally a good idea to eat well and not drink on empty stomach.’

‘This can help with an upset stomach, such as vomiting and nausea. Simply make yourself a ginger tea with a slice of fresh ginger in boiled water, or chew on some ginger sweets.’

‘Do this by working out or taking a hot bath, and thereby help your lymphatic system get rid of the toxins in your body. Beware of the sauna though as the excessive sweating could make you even more dehydrated and lower your blood sugar.’

‘This is still one of the best ways for human recovery of any kind. While you sleep, your organs get a chance to rest and restore. In case of a hangover, your liver is working hard to break down the alcohol and sleep allows its natural healing.’

So researchers tested three types of food-grade DE and found that all of them contained arsenic, as well as smaller amounts of lead and cadmium.

The amount of arsenic transferred to the drinks decreased when the beverage was exposed to less DE, the pH of the liquid was altered or the DE was washed beforehand.

They also tested commercially available beer and red and white wines for levels of heavy metals.

Dr Jackson said: ‘Because of the health effects of chronic dietary consumption of heavy metals, knowledge of potential contamination routes in the food supply continues to be of interest to government regulatory bodies such as the FDA.

‘There is a general lack of information on processing steps that contribute to heavy metals in these types of products.

‘Although heavy-metal levels in the surveyed beer and wine samples have a large range of values, the results are consistent with other research indicating that differences in packaging, processing, and the elemental composition of the soils where the raw input products are grown can all affect heavy-metal concentrations in the final product.

Though the majority of wine samples in our analysis were under the proposed 10*g/L inorganic arsenic apple-juice limit, two samples contained total arsenic above this threshold.

‘Regardless of these values, permissible levels of heavy-metal concentrations in beer and wine in the US have not been determined at this time.

‘Still, metal limits have been suggested by other entities, such as the International Organisation of Vine and Wine. These data indicate that specific steps can be taken to limit heavy-metal transfer from DE filter aids to beer and wine.’

The study was published in the American Chemical Society’s Journal of Agricultural and Food Chemistry.