Sisto Malaspina (pictured) was a beloved fixture of the Melbourne cafe he occupied for decades, before he was murdered on Friday

A former nurse who tried desperately to revive a Melbourne cafe owner after he was stabbed on Bourke Street has revealed what happened in his final moments.

Sisto Malaspina was nearby his coffee shop, Pellegrini’s, when Hassan Shire Ali, 30, exploded his car in an ISIS-inspired attack that has shocked the bustling city.

Ali began waving a knife after escaping the blazing vehicle, and it is suggested Mr Malaspina had headed over to help Ali when the attacker stabbed him in the neck.

The woman who stayed with him in his final moments, a single mother and former nurse who did not want to be named, told the Herald Sun she ‘did everything she could to try and save this poor man’.

Mr Malaspina was stabbed in an artery just above his collarbone, and bled out quickly, leaving him no hope of survival, she said.

When she realised he wouldn’t make it, the woman said she worked on making him comfortable instead.

‘I made the sign of the cross on his forehead and said, ‘I’m so sorry, I’m so sorry. At least you are now at peace’.

‘I had to wipe the blood off his brow, I needed to give him that dignity because his face was so kind.’ 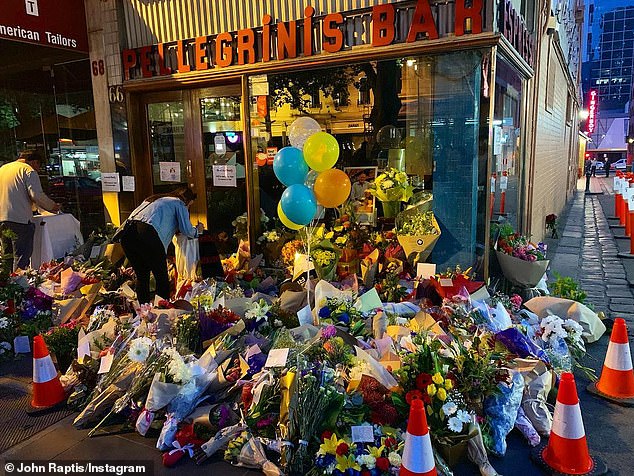 Regulars at his cafe, Pellegrini’s, and locals laid flowers outside the establishment, which has been frequented by generations of Melbourne families 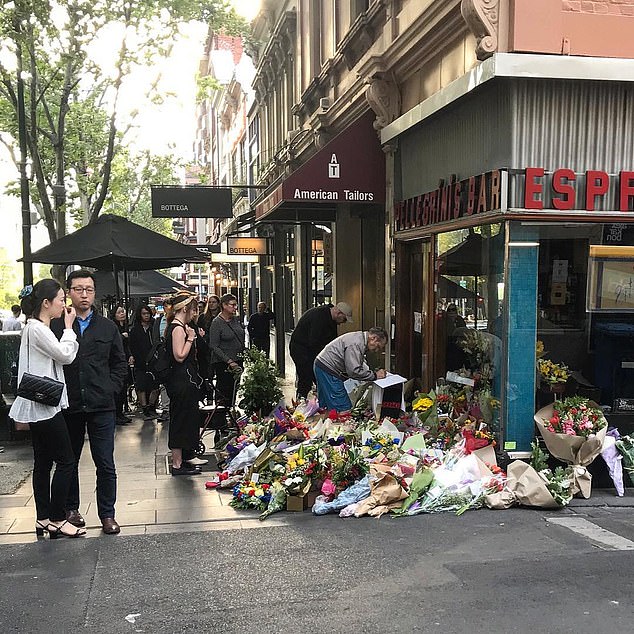 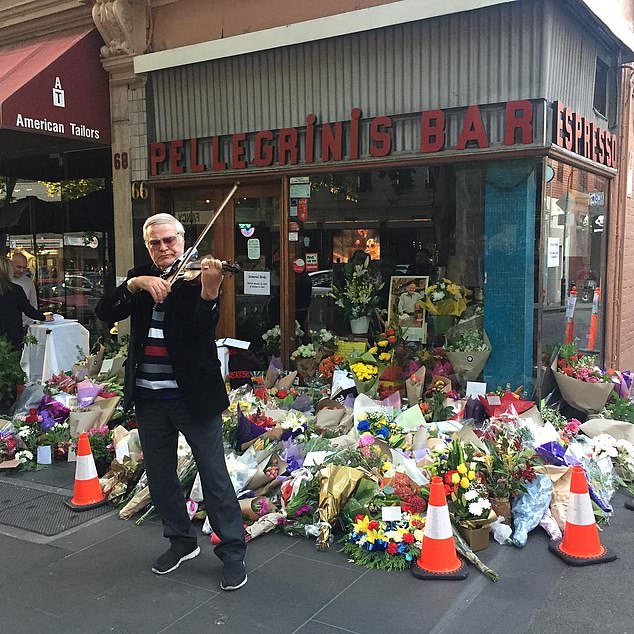 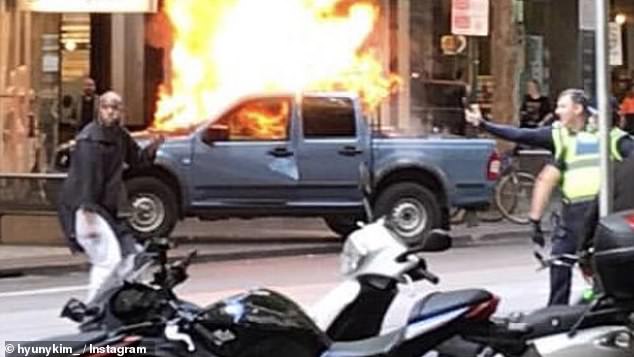 Mr Malaspina was killed by Hassan Shire Ali (left), who exploded his car on Friday before stabbing the cafe owner near the neck, hitting a major artery

Ali mounted the kerb with his Holden Rodeo ute on Friday, before setting it on fire in an attempt to explode an open barbeque gas bottle in the tray, turning his car into a makeshift bomb.

As he waited for the bottle to explode, he stabbed Mr Malaspina near his neck, killing him, and wounded Tasmanian businessman Rod Patterson, 58, and a 26-year-old security guard from Hampton Park, Melbourne.

The rampage continued when police arrived, having been called to investigate the flaming car.

Dressed in a long brown tunic, Ali lunged at the officers, with horrifying video showing him waving the knife as police try to calm him.

He is seen chasing the officers around a tree, and a bystander, who is now being hailed as a hero, is seen charging in with a shopping trolley, using it to push Ali away.

As the attacker continued to try and slash the officers, one policeman unsuccessfully tried to taser him and his partner shot the assailant in the chest.

As Ali fell to the ground, the two officers raced towards him, arrested him, and rushed him to hospital on police guard.

He died in surgery at Royal Melbourne Hospital just a few hours later.

Assistant AFP Commissioner Ian McCartney said in a press conference late on Saturday morning Ali had been on their radar, but police decided not to intervene.

‘While he held radical ideals, he didn’t hold a threat,’ he said. ‘It’s a reality check for us that even with the fall of the Caliphate (with ISIS-held territory taken back in Syria and Iraq) the threat is still very real.

‘It’s a complex and challenging business working on these threats on a daily basis the assessment was that he wasn’t a threat at that time.

‘Obviously in terms of when he turned from radicalisation to these actions will be a focus of these investigations.’ 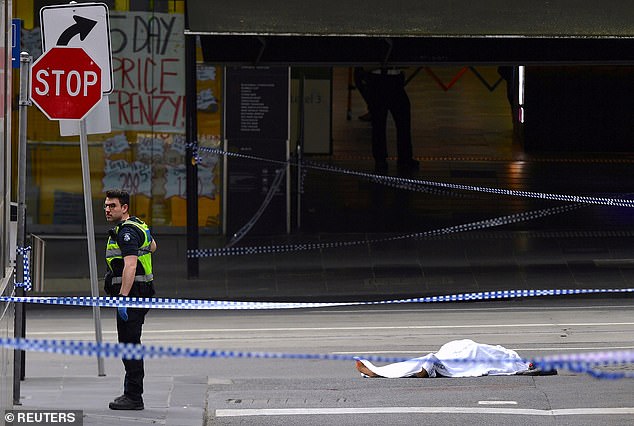 The woman who raced to his side to try and save him said after she realised he couldn’t survive, she tried to make him as comfortable as possible 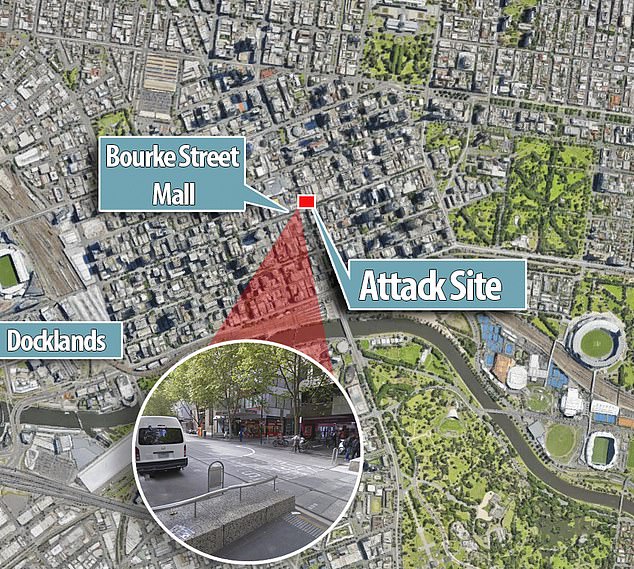 Ali stabbed two others during what police have labelled an ISIS-inspired attack, and was filmed waving a large knife at police 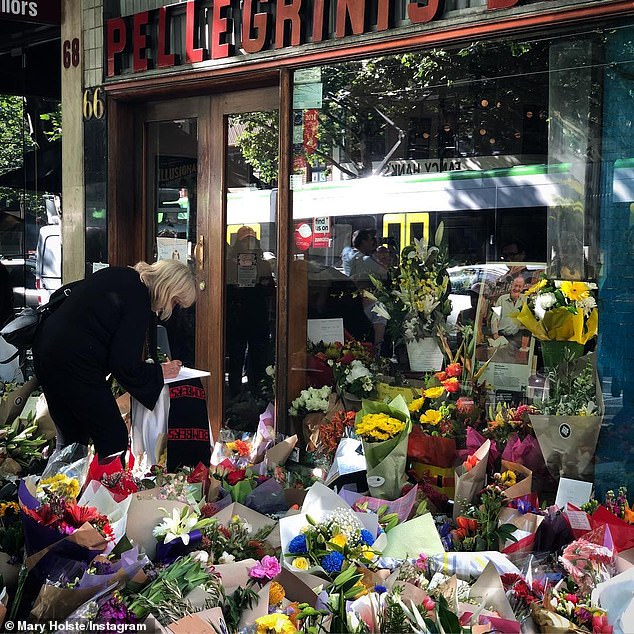 Mr Malaspina’s death was mourned by many over the weekend, with the pile of flowers seen growing by the minute 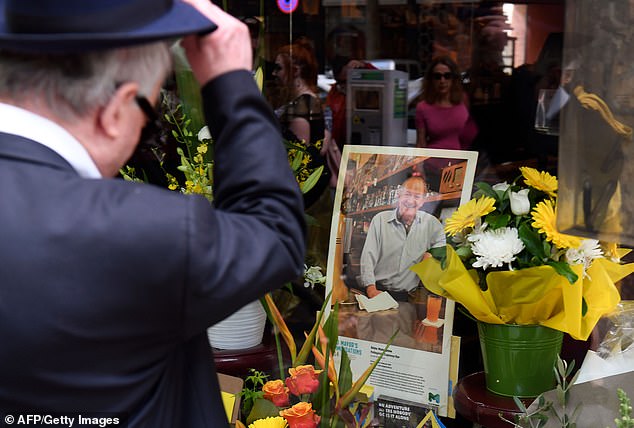 Markel Villasin, 22 and his bosses ran out of their KFC store when they heard a ‘commotion’ and saw Ali holding a knife and swinging it at police officers.

‘It looked like police officers didn’t know how to handle the situation because obviously in Melbourne it’s so rare,’ Mr Villasin told ABC.

Mr Villasin saw Mr Malaspina was breathing but said he appeared to be ‘bleeding out’ as he lay in a pool of blood while emergency responders attempted to resuscitate him using CPR.

‘Unfortunately, the man passed away, they put a sheet on him. It was crazy because he was alive at my feet as they tried to work on him and then he passed away,’ he said.

Mr Malaspina came to Australia from Italy and took over Pellegrini’s Espresso Bar in 1976 with his business partner Nino Pangrazio and maintained its original 1954 decor.

The cafe, with its heritage-listed neon sign, became a popular haunt for urban professionals, tourists, and even politicians like former Prime Minister Gough Whitlam.

Russell Crowe, David Campbell and Labor Leader Bill Shorten were among the high profile tributes to the beloved Melbourne fixture. 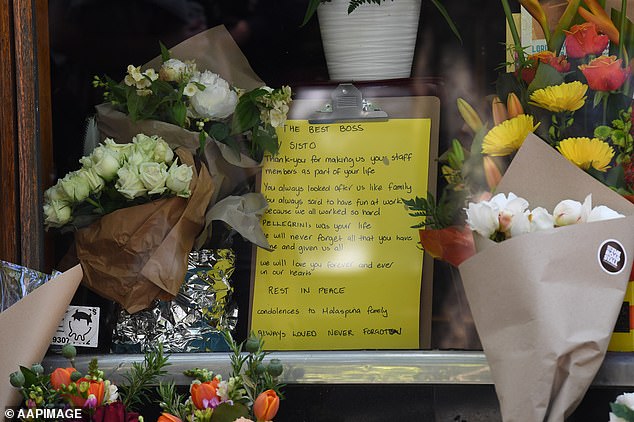 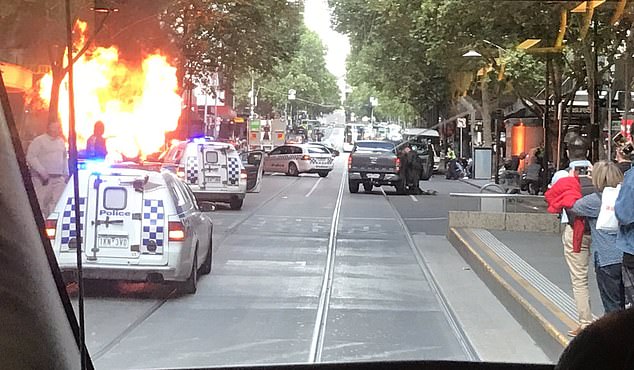 Ali’s Holden Rodeo hit a pedestrian as it mounted the kerb and burst into flames outside Target near the Swanson Street intersection about 4.20pm on Friday, before his stabbing rampage began

Mr Crowe revealed he had been visiting Pellegrini’s long before he had any semblance of the life he enjoys now.

‘I’ve been going to Pellegrini’s since 1987. Never been to Melbourne without dropping in on my man Sisto .

‘South Sydney stickers on the wall and caps on display. My sweet loyal friend, stabbed in the street by a mad man. Cosí triste [so sad].’

Mr Campbell said Mr Malaspina’s venue was his ‘favourite place in the city, mainly due to [its owner]’.

‘He would yell when I came in “Here he is…the artist!”, ask about my family and my father (who also went religiously).

‘An icon of Melbourne. You were never a stranger in his company.’ 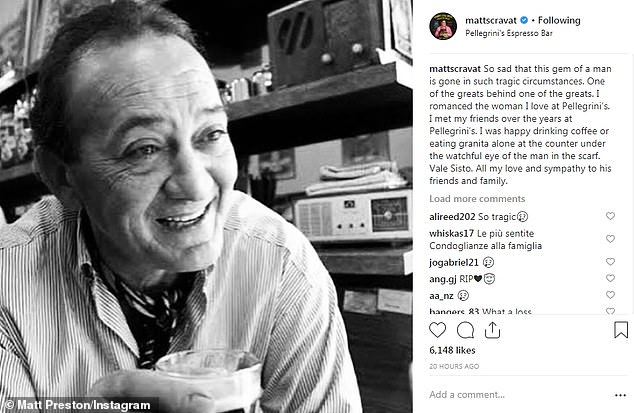 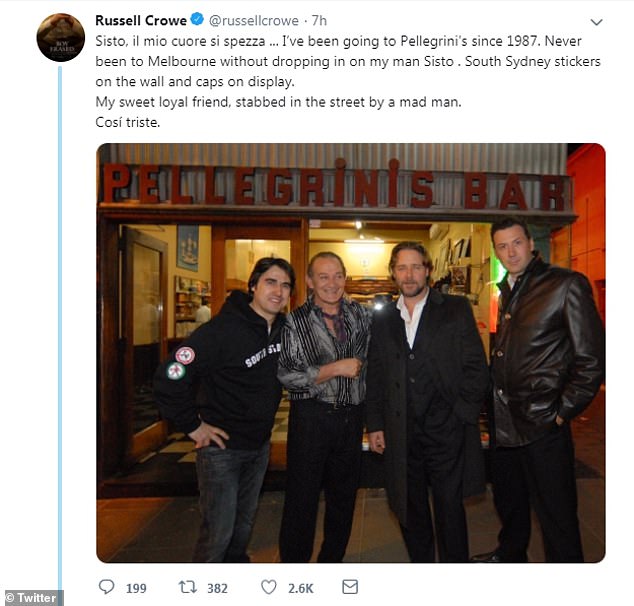 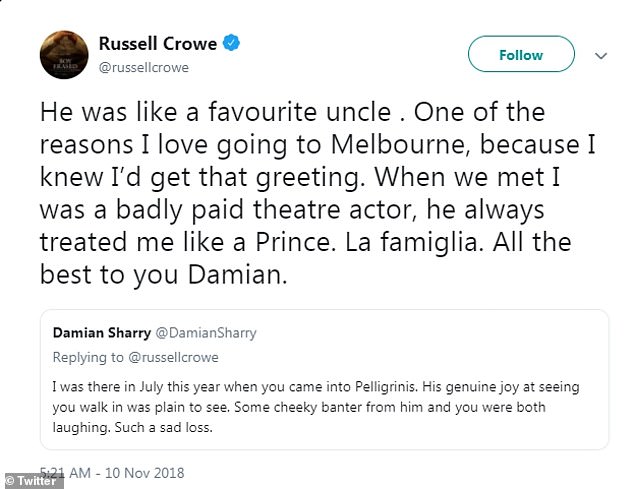 ‘I have been visiting Pellegrini’s since school. I just saw Sisto on Monday morning. He insisted I try a slice of his almond cake,’ he said.

TRIBUTE WRITTEN BY STAFF IN FRONT OF PELLEGRINI’S

Thank-you for making us your staff members as part of your life.

You always said to have fun at work because we all worked so hard.

Pellegrini’ s was your life.

We will never forget all that you have done and given us all.

We will love you forever and ever in our hearts.

‘He’s a Melbourne icon and a true gentleman. Impossible to imagine the devastation for his family and staff.’

‘So sad that this gem of a man is gone in such tragic circumstances,’ he said.

‘I met my friends over the years at Pellegrini’s. I was happy drinking coffee or eating granita alone at the counter under the watchful eye of the man in the scarf.

‘Vale Sisto. All my love and sympathy to his friends and family.’

While some shared their grief for the beloved Melbourne icon online, others chose a more personal route.

Pellegrini’s was surrounded by flowers over the weekend, with mourners coming to pay their respects and sign a condolences book for Mr Malaspina’s family.

A violinist played a slow and mournful song as onlookers held each other and took a moment to remember the friendly face that once greeted them from behind the counter.

Pasted to the front of the door was a letter from the staff at Pellegrini’s, remembering their boss as a man devoted to his work and his family, who took delight in their successes and looked after all who worked there like they were his own children.

Another sign said the cafe would reopen on November 12. 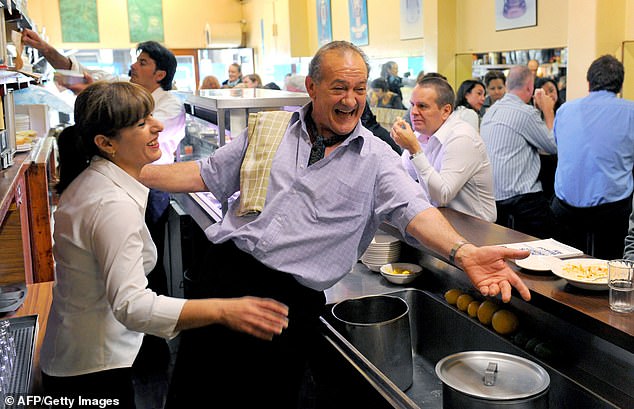 Pellegrini’s will reopen on November 12, but Mr Malaspina’s loss will be felt deeply for a long time