Final UK death toll from coronavirus ‘could be worse than the Second World War’, according to study

Coronavirus and the lockdown measures used to control its spread could result in the deaths of almost 700,000 people in Britain – more than in the Second World War – a professor has warned as part of a shocking new study.

Researchers predict that without a vaccine Britain could be forced to keep social distancing measures until 2024 in order to beat Covid-19.

But if Britain is plunged into a recession as a result, more than 675,000 could die from the virus, poor healthcare and impoverishment over the next five years, experts warn.

The figure, which comes from a new study led by Philip Thomas, a Professor of Risk Management at the University of Bristol, is higher than the approximately 525,000 civilian and military personnel from Britain who died in the Second World War.

‘Total lockdowns will not work for Covid-19,’ warns professor

A Swedish professor has warned against total lockdowns as a way to control coronavirus.

Although he admits the benefit of preventing hospitals from becoming overwhelmed which, the UK Government says, has been its aim all along.

Writing in an article in The Lancet, Dr Giesecke said: ‘Many countries (and members of their press media) have marvelled at Sweden’s relaxed strategy in the face of the coronavirus disease 2019 (COVID-19) pandemic: schools and most workplaces have remained open, and police officers were not checking one’s errands in the street.

‘It has become clear that a hard lockdown does not protect old and frail people living in care homes.

‘Neither does it decrease mortality from COVID-19, which is evident when comparing the UK’s experience with that of other European countries.’

Dr Giesecke explained that estimates in Sweden suggest a quarter of 2.4million people in the capital, Stockholm county, have had the virus already and around 99 per cent of them were never diagnosed.

He added: ‘COVID-19 is spreading like wildfire in all countries, but we do not see it.

There is very little we can do to prevent this spread: a lockdown might delay severe cases for a while, but once restrictions are eased, cases will reappear.’

‘The only reason we have good health and live a long time in the UK is because we are one of the wealthiest nations in the world.

‘The policy of coming out of lockdown gradually, over five years – which will be necessary if we are to keep the infection rate close to or below 1 – will reduce the toll on life from the coronavirus but incur a far greater loss of life through the impoverishment of the nation.’

The study, which is due to be published in the Scientific Journal Nanotechnology Perceptions, estimates around 150,000 people will die from coronavirus over five years under semi-lockdown conditions.

But it also reveals that a slow easing of lockdown, which will help avoid a strain on the NHS due to an influx of cases, will likely result in the economy shrinking by up to a quarter in 2020.

And it warns the economy may not recover until 2024, which could result in hundreds of thousands of deaths due to impoverishment, poor health care and a relaxing of safety measures over the next five years.

The research comes after another study, by University of East Anglia (UEA) researchers, found that stay-at-home orders and shutting all non-essential businesses had little effect on fighting coronavirus in Europe.

The same scientists discovered closing schools and banning all mass gatherings did work in slowing outbreaks across the continent.

Banning mass gatherings, along with closing schools and some non-essential businesses, particularly in the hospitality sector, were the most effective ways at stopping the spread of the disease, the researchers found. 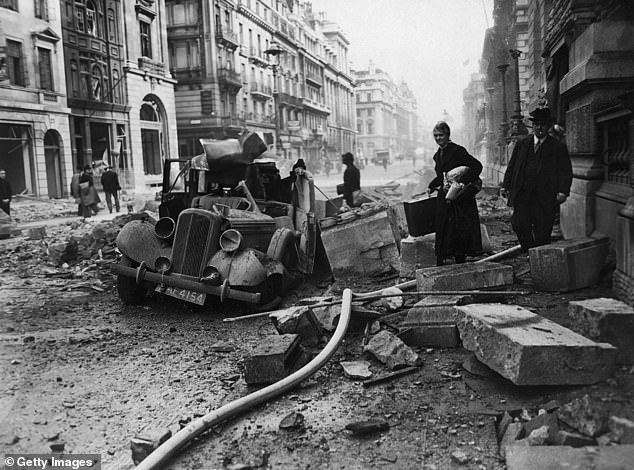 Philip Thomas, a Professor of Risk Management at the University of Bristol, the knock on effect of coronavirus could kill more than the approximately 525,000 civilian and military personnel from Britain who died in the Second World War. Pictured: A wrecked Humber car on Pall Mall, London after an air raid during the London Blitz in 1940

They cautioned that the study, which was funded by the National Institute for Health Research Health Protection Research Unit in Emergency Preparedness and Response at King’s College London and Public Health England, is experimental.

The research adds to claims from Dr Johan Giesecke, of Stockholm’s Karolinska Institute, that total lockdowns are unnecessary because the virus is unstoppable.

Although he admits the benefit of preventing hospitals from becoming overwhelmed which, the UK Government says, has been its aim all along.

The latest study comes as Boris Johnson is today expected to tweak lockdown rules – amid warnings 100,000 Britons could die by the end of the year if he gets it wrong.

The PM is set to unveil very tentative first steps towards easing the curbs strangling the economy in a televised address to the nation at 7pm, after he was warned that 18,000 new infections are still being recorded every day – far above the target of 4,000 for a wide-scale loosening.

The PM will drop the blanket ‘stay at home, protect the NHS, save lives’ slogan, instead urging people to ‘stay alert, control the virus, and save lives’.

Britain’s biggest trade unions are today threatening to tell millions of members not to return to work unless the government introduces policies to ensure workplaces are safe.

Leaders of unions such as Unite, Unison and the General have written an open letter to Prime Minister Boris Johnson demanding he guarantees ‘the right policies and practices are in place to make workplaces safe’ in the midst of the coronavirus pandemic.

The letter, published in The Observer today, and which is backed by other unions including Municipal, Boilermakers (GMB) and the Union of Shop, Distributive and Allied Workers (USDAW), also urges the government to boost funding for health and safety enforcement in the workplace.

A DefCon-style five stage alert system will be introduced to describe the country’s outbreak condition, with the UK currently being at the second most serious rating of four – meaning most of the lockdown must be maintained.

With evidence increasingly suggesting the virus spreads far less readily in the open air, the once-a-day limit on outdoor exercise will be dropped.

The focus will also shift to getting businesses up and running where possible, with detailed guidance for firms on how they should operate, and garden centres allowed to open from Wednesday where two-metre ‘social distancing’ rules can be put in place.

Shoppers could be urged to wear face coverings, as has already happened in Scotland.

The ambitions for lockdown have reportedly been scaled back, with Mr Johnson his most senior ministers – Dominic Raab, Michael Gove, Rishi Sunak and Matt Hancock – having thrashed out a limited strategy on Wednesday night, fearing that the country’s infection rate is still too high.

The real figure is reported to be around 14,000 people a day, while the government’s target is said to be around 4,000, according to the Sunday Times.

It has emerged the government’s Scientific Advisory Group for Emergencies (SAGE) received warnings that there could be 100,00 deaths by the end of the year if measures are relaxed too far and too fast.