Finance Minister Mathias Cormann claims he had ‘no idea’ $2,780 family flights to Singapore were paid for by a travel company that had won a $1billion contract from his department.

The senior cabinet minister on a salary of $383,000, his wife Hayley Ross, and their two young daughters flew to the popular Asian travel destination from Perth in January 2018.

Melbourne-based travel firm Helloworld paid for the return tickets in July 2017, a month before it announced its AOT corporate travel subsidiary had been awarded a $1billion, three-year contact, a Sydney Morning Herald investigation has revealed.

Finance Minister Mathias Cormann (left with wife Hayley) claims he had ‘no idea’ $2,780 family flights to Singapore were paid for by a travel company that had won a $1billion contract 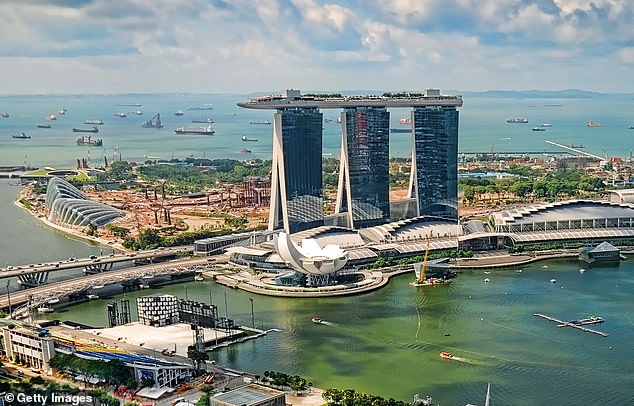 Senator Cormann agreed to repay the money on Monday after being contacted by Nine Entertainment’s flagship newspaper, claiming he had ‘no idea’ Helloworld had booked the travel under the ‘family and staff’ account category without charging the minister’s credit card.

Helloworld subsidiary AOT’s contract with the Department of Finance is worth more than $300million a year.

Senator Cormann has released a letter to him from Helloworld’s chief financial officer Michael Burnett blaming a ‘regrettable administrative error’ for the company’s failure to charge the minister’s credit card account.

‘The flights were never “free” and were never intended to be free,’ he told Senator Cormann.

‘We apologise for any inconvenience or embarrassment this administrative error may have caused.’

A spokeswoman for Senator Cormann told Daily Mail Australia the minister had instructed Helloworld to charge the Singapore flights to his credit card.

‘That is what the minister genuinely thought had happened,’ she said.

‘At no point, until approached by the media yesterday, did the minister receive any reminders that the payment due remained outstanding.’

Senator Cormann also released a statement claiming he had no role in awarding the tender to Helloworld.

‘At no point did I influence or seek to influence the outcome of the tender process,’ he said. 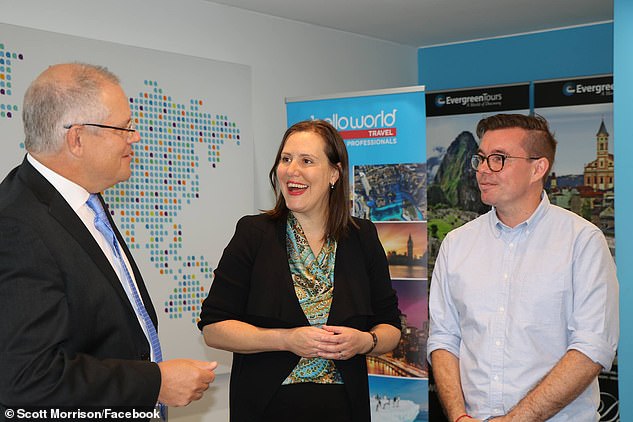 Listed company Helloworld’s chief executive Andrew Burnes is the Liberal Party’s federal treasurer and has been a Liberal Party donor.

In February 2018 when he was treasurer, Mr Morrison held a media event at a Hellowood outlet in the inner-Melbourne suburb of Ashburton, in the Higgins electorate of then Financial Services Minister Kelly O’Dwyer.

‘Thanks very much Kelly, it’s great to be here at – and I’ll do my best John Laws impersonation “Hello world!”,’ he said

‘It’s great to be seeing another business that is benefiting from the tax cuts that have already been delivered and legislated. 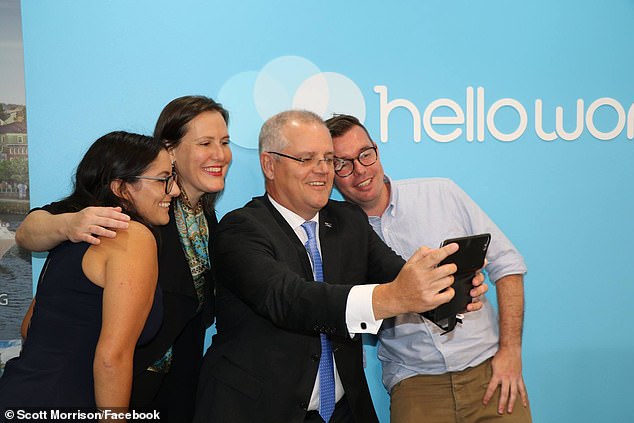 In February 2018, Mr Morrison held a media event at a Hellowood outlet in the inner-Melbourne suburb of Ashburton in the Higgin electorate of then Financial Services Minister Kelly O’Dwyer

‘We are getting about it and particularly supporting small businesses like Helloworld.’

The Australian has also revealed that Mr Burnes and federal Liberal Party president Nick Greiner, a former NSW Premier, have been selling $10,000 a head tickets for dinner with the Prime Minister Scott Morrison and his ministers. 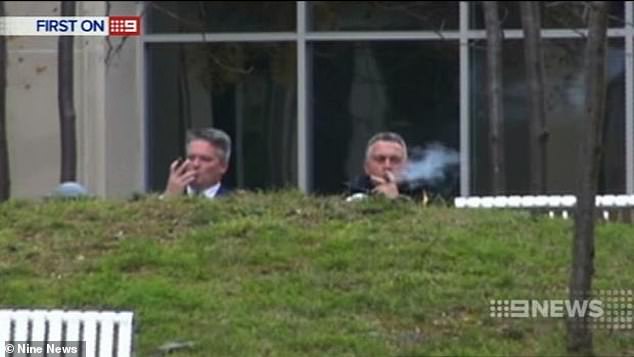 It is being hosted in May by Jeanne Pratt, the widow of deceased Visy Industries chairman Richard Pratt.

Senator Cormann denied there was a conflict of interest between Helloworld’s chief executive Andrew Burnes also being the Liberal Party’s federal treasurer.

‘No. The same company, with the same CEO was awarded this contract initially back in 2012 during the period of a Labor government,’ his spokeswoman told Daily Mail Australia.

‘This was after the CEO had served as honorary Treasurer of the Liberal Party in Victoria.’