The city watchdog has vowed to ‘up its game’ after a Money Mail investigation exposed how easily fraudsters can scam thousands of victims online.

Last month, we revealed how a fake website we created, that promoted returns of 9.5 per cent on bonds, had lured in around 1,700 potential victims within five days.

We paid Google just £95.88 to advertise our website under search terms such as ‘Isa best buys’. Extraordinarily, our advert was approved despite it being flagged as suspicious.

Mark Steward, Executive Director of Enforcement and Market Oversight at the FCA, said our fake website, best2invest.co.uk, was ‘typical’ of the sort of investment scams that have spiked over the last year.

He told the FCA Investigations & Enforcement summit: ‘The best2invest example demonstrates the velocity of online harm, achieving in days what took months with an ‘old school’ cold calling boiler room.’

The Mail is campaigning to clamp-down on online financial fraud. Criminals are increasingly using ‘bond comparison’ sites — such as best2invest — to avoid checks.

These sites don’t have to be explicit about what they sell; asking customers for their details to pass on to ‘investment partners’. In reality, fraudsters are given the details. 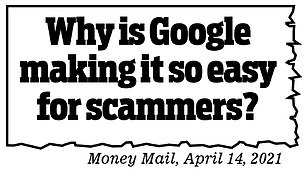 Our investigation showed fraudsters can scam thousands, even if websites are taken down days later. This is partly because Google gives firms selling financial goods 21-days to prove their credentials.

MPs and campaigners have said the tech giant could end the scam epidemic if it verified ads before they went live.

Money Mail’s ad went live on February 22 and was added to the FCA’s warning list three days later, before Google paused it on February 27.

During that time it was viewed more than 3,500 times, with 1,736 customers clicking through to an enquiries page.

Mr Steward explained that our investigation showed how online scams are ‘easy to manufacture… on an industrial basis’.

He said: ‘Despite the red flags, investors remain vulnerable to too-good-to-be-true investment proposals. The FCA has a role to play here and we are upping our game.’

Mr Steward said the FCA had ‘ratcheted up proactive monitoring of the internet’ with the aim of spotting suspicious ads within 24 hours.

The watchdog has 50 investigations on foot involving unauthorised activity of 183 suspects.