Finland says it will consider bringing in a universal basic income at the end of its two-year trial after reports it was scrapping the scheme sparked headlines around the world.

The Scandinavian country became the first in Europe to trial such a scheme, with 2,000 unemployed between the ages of 25 and 58 receiving 560 Euros (£475) a month for two years from January 1, last year.

Under the radical experiment, recipients were told they were free to spend the money on anything they choose, did not need to prove they were looking for work and would still receive the basic income even if they did get a full or part-time job.

Reports around the world suggested the pilot would not be expanded and one of the programme’s designers was quoted as saying the ‘eagerness of the government is evaporating’.

But social affairs official Miska Simanainen said today that the trial, where people are being paid £6,000 a year with no questions asked ‘is proceeding as planned.’

Olli Kangas, one of the experiment’s designers, had been quoted as saying the  government had ‘rejected further funding’ for the scheme.

Data from the trial, which has captured global attention, is due to be released in 2019, giving experts the opportunity to analyse the merits of the scheme.

Many in Finland, a nation of 5.5 million, have been critical of the idea of handing out cash without first requiring that people work.

Critics feared escalating tax demands on the population. Others said receiving a guaranteed basic income would simply make some unemployed people less inclined to look for a job.

In December, however, the parliament passed a law requiring those receiving benefits to actively seek work – and to provide evidence of their job-hunting every three months.

Meanwhile, there are also reports that the pilot was in placed doubt because Finland is eyeing a new form of welfare programme. 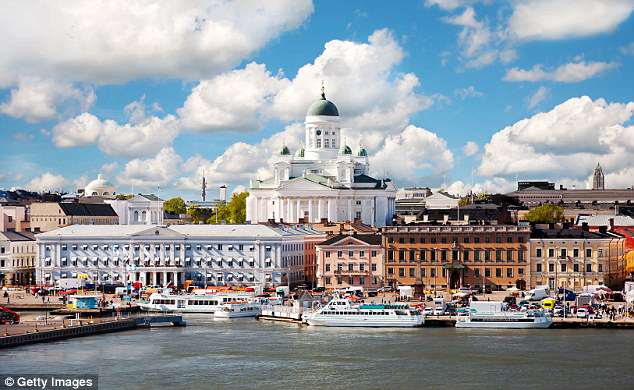 The Scandinavian country became the first in Europe to trial such a scheme, with 2,000 unemployed between the ages of 25 and 58 receiving 560 Euros (£475) a month for two years from January 1, last year. File picture shows the capital, Helsinki

Finland’s finance minister, Petteri Orpo, has suggested following up the scheme with a trial of universal credit, a version of which was introduced in Britain in 2013.

This would see a single social security payment that replaces separate benefits like child welfare or income support.

Finnish government agency Kela, which is responsible for the country’s social benefits, had hoped the basic income scheme would encourage the recipients to seek employment, boost labour mobility, remove disincentives to work and reduce bureaucracy.

It was part of the measures by the centre-right government of Prime Minister Juha Sipila to tackle Finland’s joblessness problem.

In December 2016, just before the trial started, the unemployment in Finland was running at 8.7 per cent. By January this year, 12 months into the two-year pilot, it had barely changed at 8.5 per cent.

Kangas told Finnish broadcaster YLE: ‘Two years is too short a period to be able to draw extensive conclusions from such a big experiment.  We should have had extra time and more money to achieve reliable results.’

In an interview with the New York Times, he added: ‘The government has chosen to try a totally different path. Basic income is unconditional. Now, they are pursuing conditionality.’

Heikki Hiilamo, a professor of social policy at the University of Helsinki, told the newspaper: ‘There is a problem with young people lacking secondary education, and reports of those guys not seeking work. There is a fear that with basic income they would just stay at home and play computer games.’

In 2016, the Swiss government held a referendum on whether to pay every citizen around 2,500 Swiss francs (£2,000) per month, but the policy was decisively rejected by Swiss voters.