Finland ski holiday: Discovering the resort of Salla and going on a thrilling husky safari

Ready, sleddy, go! Get set for the ride of your life on a thrilling husky safari through the freezing expanse of Finland’s far north


We were a dozen miles from Russia’s border, way up in north-east Finland within the Arctic Circle — and going like the wind.

‘We’ comprised myself and Ninja, Teutori, Elsa and Siiri, four Siberian huskies, who were racing ahead, pulling our sled through remote spruce forest near Salla ski resort.

The huskies were loving it, raring to go from the off. So was I. How could you not be, out in the wilderness with all that fresh air in a blissfully quiet corner of Lapland?

Siberian huskies pulling a sled through a spruce forest (file photo). Reflecting on his own husky ride, Tom Chesshyre says: ‘They really are adorable creatures’

Instruction had been minimal: ‘If they go too fast, use the brake!’ This was a metal foot-pedal that shoved a claw into the snow.

A few occasional dabs seemed to do the trick. The rest of the time we were off to the races, flying along corridors of conifers — and even though it was minus 5c, you did not feel a thing, at least not in the furry jumpsuits provided.

Salla is a tiny resort with ski runs that are mainly suited to beginners and intermediates, plus a few more challenging slopes (these are occasionally used by the French ski team).

It is so remote one of the highlights is sometimes spotting wild reindeer.

Another is slope-side barbecues provided to cook your own lunch (everything is extremely relaxed and low-key). Most people visiting Salla stay in self-catering log cabins. 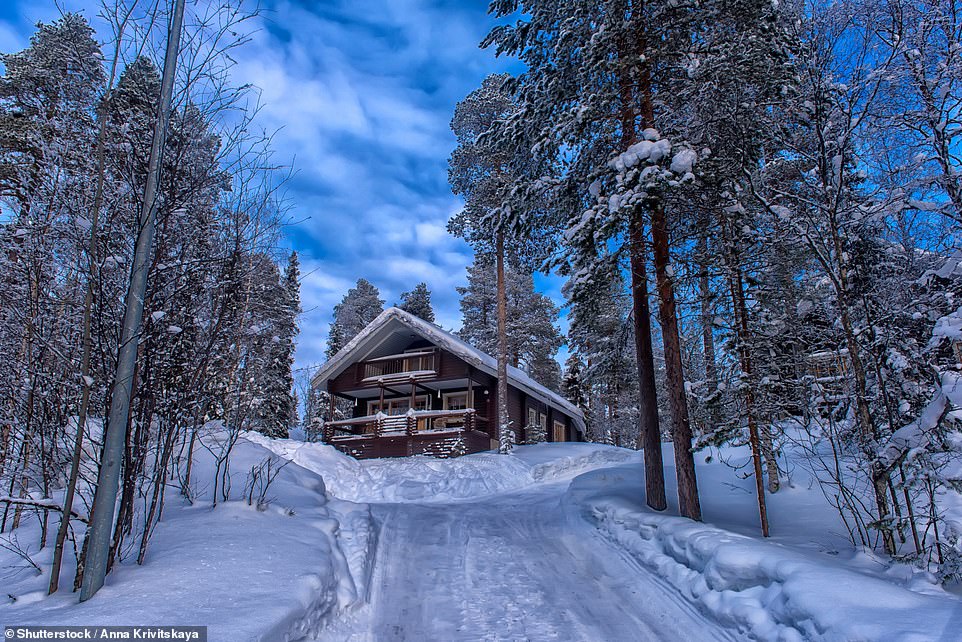 Tom says that Salla’s ‘splendid isolation’ is one of the great things about the resort, which lies in the rugged north of Finland

A week in Salla Cabins is from £645pp self-catering with Gatwick-Kuusamo flights till mid-February (crystalski.co.uk). A six-hour husky ride with lunch from £233 (sallareindeerpark.fi). Finland is currently on the travel ‘green list’, meaning no quarantine is required on your return home. You need to be fully vaccinated to enter the country. More information: visitfinland.com.

There’s a convivial pub, a couple of restaurants (reindeer on the menus), a shop, a frozen lake and not much else.

The great thing about Salla is its splendid isolation, being so far up in the rugged north. One day I went ice-fishing — drilling a hole in the ice on the frozen lake and sitting quite happily for a long time, with a few Finnish beers for company and the mountain of the ski resort looming up above. Sad to say, I didn’t catch a fish. Didn’t even get a nibble. What did I care though, resting on a little fold-up chair and drinking my Karhu lager, deep in the wilderness of the Arctic Circle?

On another, I joined locals at a sauna beside a part of another frozen lake where the ice had been removed to allow sauna-goers the opportunity to step into the chilly water after having heated up for a while inside the little wooden sauna hut.

So passed an hour or so of hot-cold, hot-cold sensations, with fellow bathers choosing to either don swimwear — or not — beneath a jet-black sky surrounded by pine forest.

But for me the highlight of the outing was the huskies.

After whizzing along for a morning, you stop on these ‘husky safaris’ for a lunch of delicious salmon soup by a campfire.

This was a chance to get to know the hounds, who loved being petted while howling from time to time. They really are adorable creatures.

And then we were off again, zooming through the forest as Lapland flew by, a million miles, it seemed, from anywhere.