Finnish conductor returns to BBC Last Night of the Proms

The Last Night of the Proms will this year again be led by Finnish conductor Dalia Stasevska who two years ago was at the centre of a row over proposals to perform Land of Hope and Glory and Rule, Britannia! without singing.

Both songs will be sung on the big night on September 10 and will be led the Kyiv-born conductor. Stasevska and her family received threats in 2020 over plans to play the patriotic songs on the Last Night as instrumentals only, because of social distancing restrictions that limited the number of musicians at the Royal Albert Hall in London.

The broadcaster had initially announced at the time that the anthems would be ‘new orchestral versions’ in the 2020 concert series, following concerns raised over their perceived historical links with colonialism and slavery.

But the decision, which actually had nothing to do with Stasevska despite her being blamed for it, was overturned ten days before the concert by the BBC after a furious backlash from the British public, Prime Minister Boris Johnson, MPs across the political divide and a MailOnline petition which attracted more than 100,000 signatures.

The talented Stasevska, who only made her Proms debut three years ago, moved from her birthplace of Ukraine to Finland when she was aged five. She trained as a violinist and is married to the Finnish musician Lauri Porra, who is the bass guitarist for power metal band Stratovarius and the great-grandson of composer Jean Sibelius.

Stasevska is a supporter of the Black Lives Matter movement and has also previously spoken out against Mr Putin, having published a letter in 2014 condemning 511 Russian musicians for supporting his annexation of Crimea.

At the time of the row over Rule, Britannia!, Stasevska issued a statement to say she was not responsible for axing the singing and recognised it as an ‘important part of the event’ – after BBC sources cited in the Sunday Times claimed she was one of those keen to ‘modernise’ the event and reduce the patriotic elements involved.

She said in 2020 there had been ‘a good deal of inaccurate speculation about my role in determining the format’ of the concert, adding: ‘This false speculation has led to abuse and threats towards me and my family which is why I am speaking out. For the record I have played no role in deciding the traditional elements of the programme.’

Meanwhile, also at the Proms 2022, in another nod of support from to Ukraine as it defends itself against Russia, this year’s series will see Ukrainian refugees make up part of the newly-formed Ukrainian Freedom Orchestra.

The musical ensemble, led by Canadian-Ukrainian conductor Keri-Lynn Wilson, will also include Ukrainian members of European orchestras. The Ukraine Ministry of Culture is granting a special exemption from fighting in the war against Russia – which began on February 24 – to male members of orchestras who are of military-age.

The orchestral members will perform on July 31 as part of the eight-week season of classical music concerts. After the Proms their tour will continue to cities including Paris, Berlin, Amsterdam, Edinburgh and New York.

The BBC’s director of the Proms, David Pickard, confirmed that Russian musicians will take part in this year’s event, but should any come out in support of Vladimir Putin’s regime then they would be banned from performing. 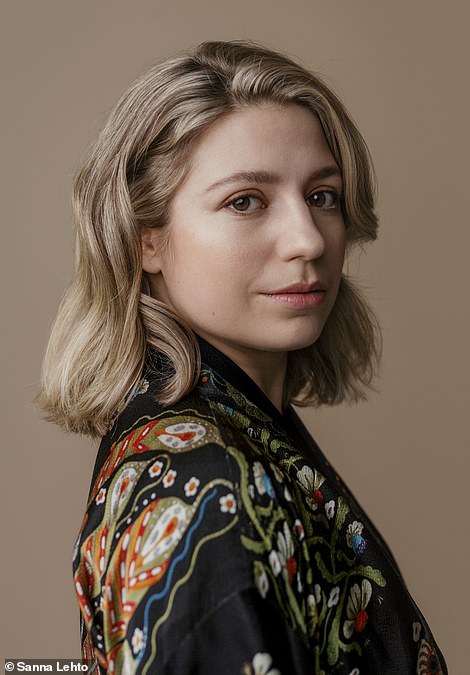 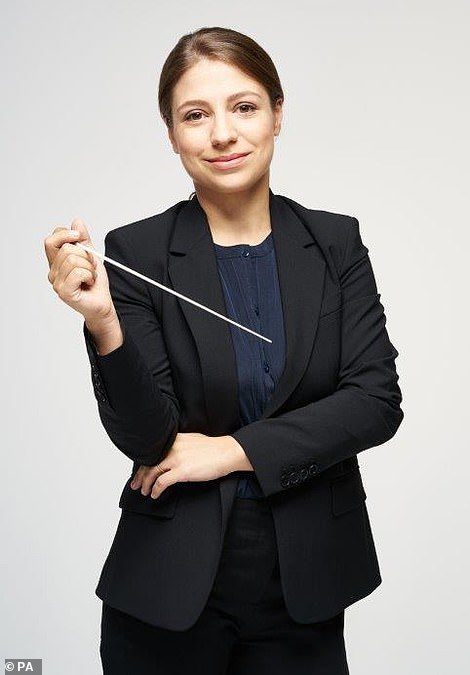 Dalia Stasevska was at the centre of a row over plans to perform Land of Hope and Glory and Rule, Britannia! without singing 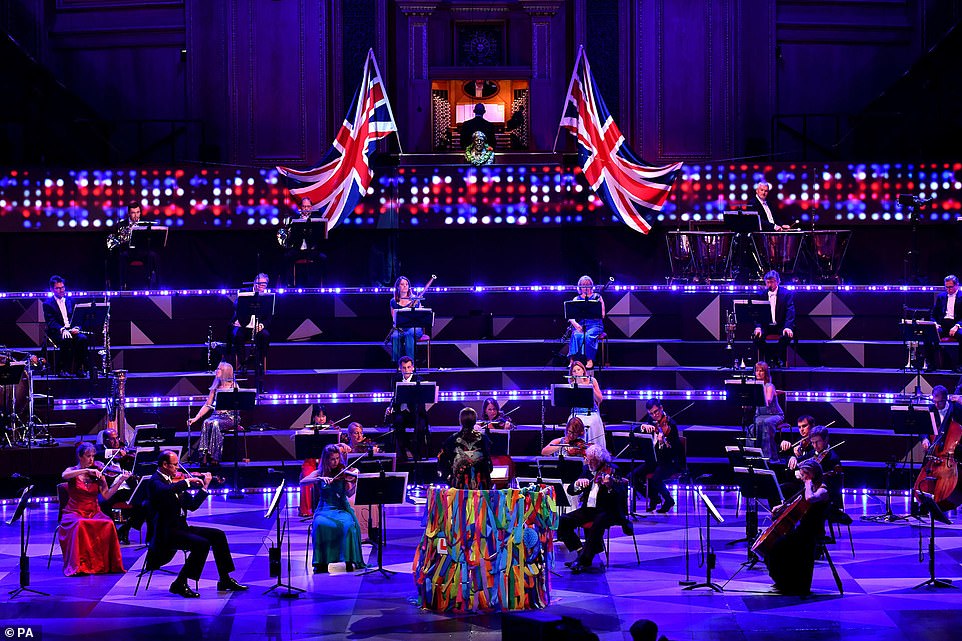 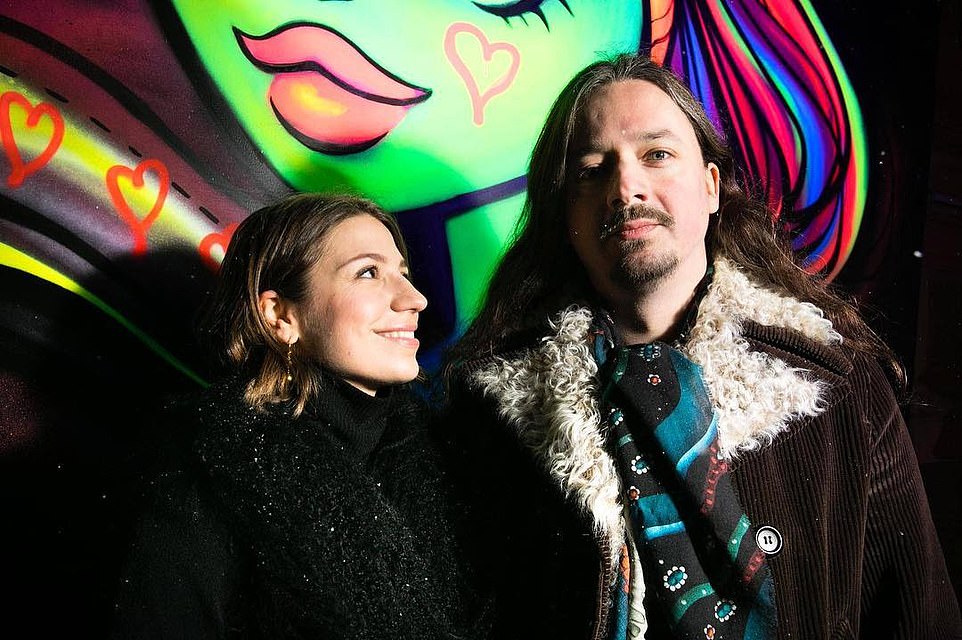 Dalia Stasevska is married to the Finnish musician Lauri Porra, who is the bassist for power metal band Stratovarius

He confirmed that Russian musicians would not have to make a statement condemning Mr Putin because it could ‘put them in danger’ – but said he was confident none were public supporters of Russia’s invasion.

Mr Pickard added: ‘Many of them have spoken out very openly against the regime. We have had private conversations with others and I am confident that there is nobody there that is a public supporter of the regime.

‘I think if there were somebody to express those views, to be putting it bluntly, there would be no place for them at the Proms.’

This year Proms returns to its full eight-week season on July 15, with 84 concerts starring more than 3,000 musicians, the BBC announced.

It will see the return of international orchestras including Berliner Philharmoniker led by Kirill Petrenko, the Philadelphia Orchestra led by Yannick Nezet-Seguin, and the Australian World Orchestra led by Zubin Mehta.

It will also feature a large-scale repertoire, not heard at the festival since 2019, from Verdi’s Requiem to Beethoven’s Ninth Symphony performed by the Chineke! Orchestra and Voices under Kevin John Edusei.

There will also be an immersive experience of music, dance, theatre, and audio soundscapes called The Prom At Printworks, hosted at the industrial events space in south London, featuring works by Philip Glass and Handel.

For the first time there will be a Gaming Prom, presented by the Royal Philharmonic Orchestra under Robert Ames, which will explore the sounds of video games.

To mark the Queen’s Platinum Jubilee, the BBC Concert Orchestra will present a Prom celebrating the relationship between music and monarchy, from Handel’s Water Music to a new commission from British composer Cheryl Frances-Hoad.

This year’s festival, which marks the centenary of the BBC, will feature more than 60 artists making their debut to commemorate 100 years of British broadcasting as well as celebrating a new generation of music. 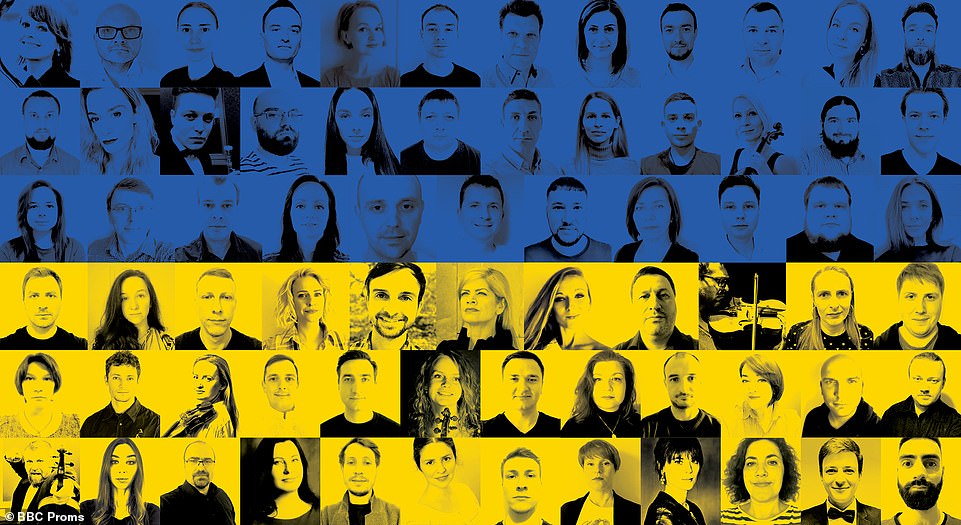 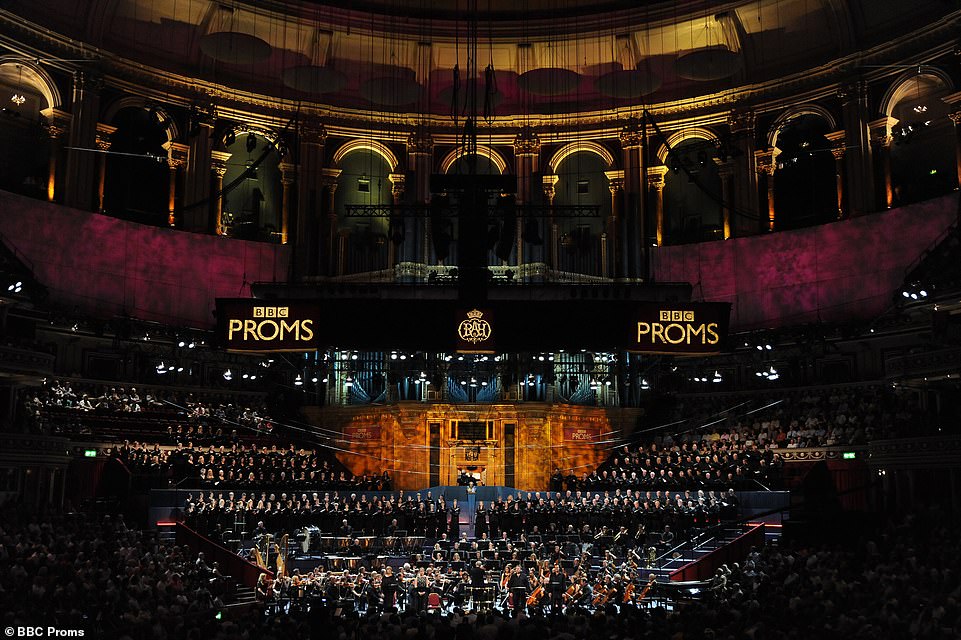 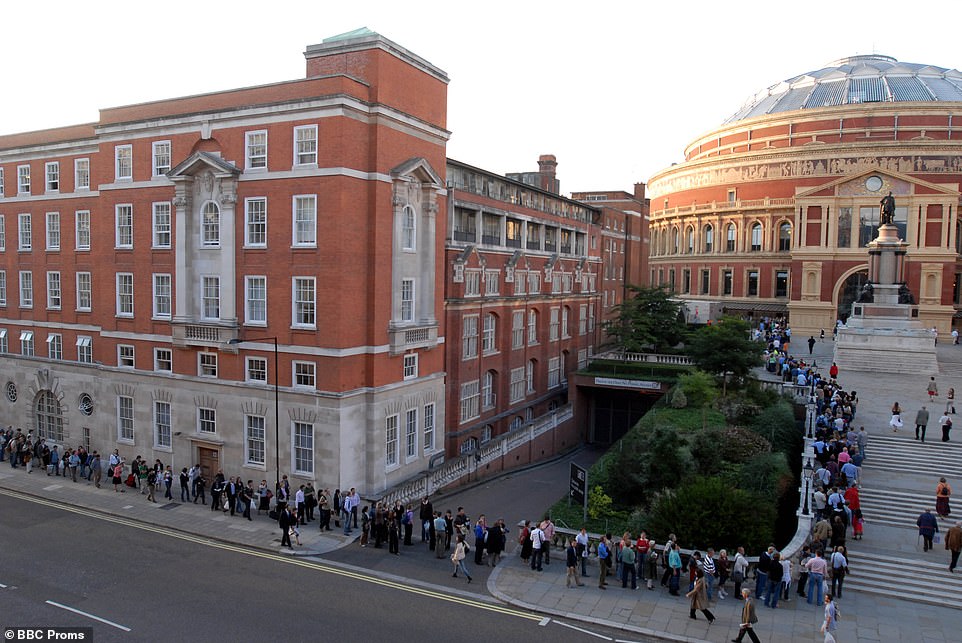 ‘Prommers’, as attendees are known, regularly queue outside the Royal Albert Hall in London for cheaper on-the-day tickets 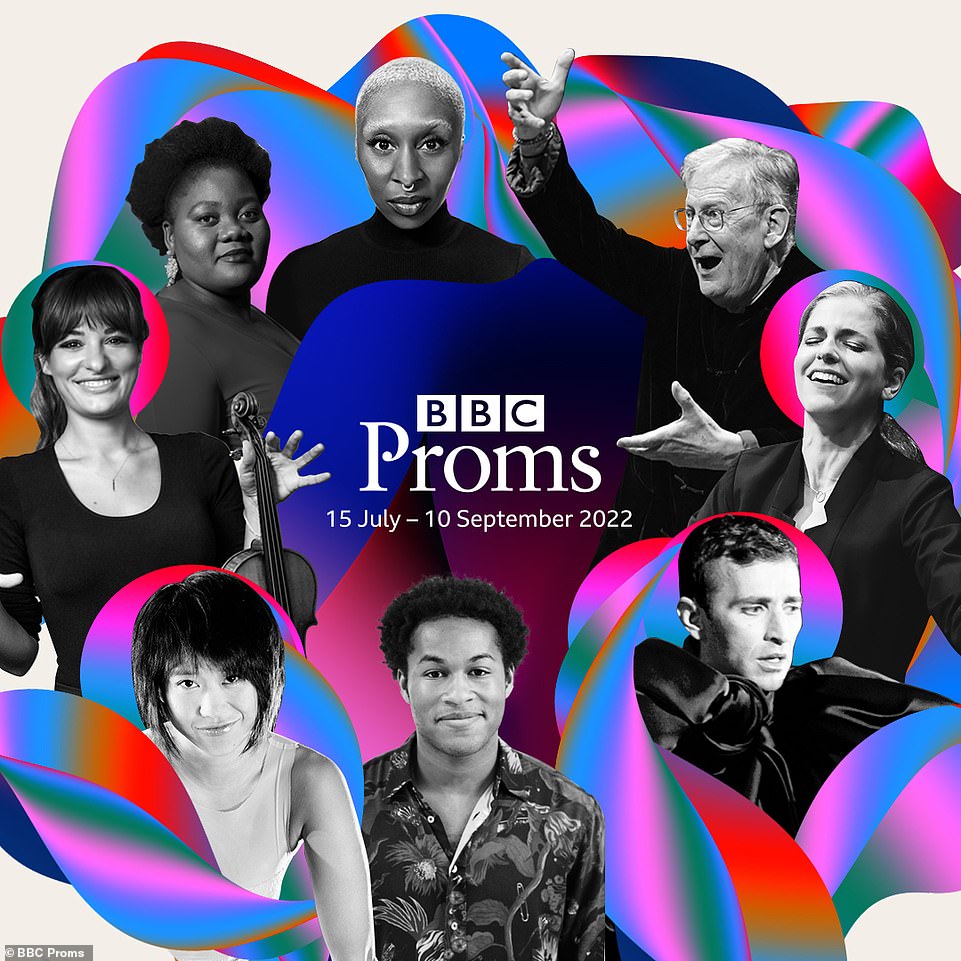 The BBC Proms will run from July 15 to September 10 this year, with general booking beginning at 9am on Saturday, May 21

The Last Night Of The Proms will be led by Dalia Stasevska, featuring star soloists Sheku Kanneh-Mason, who won BBC Young Musician of the Year in 2016, and a world premiere by James B Wilson.

Mr Pickard said: ‘It is a momentous year for the world’s largest classical music festival.

‘I’m delighted that large-scale orchestral and choral repertoire will once again be heard in the Royal Albert Hall, and that we can celebrate the return of international orchestras.

‘In the BBC’s centenary year, we can be proud that the Proms has been a part of the organisation for 95 of those 100 years, playing a key role in the corporation’s mission to inform, educate and entertain.

‘After two adapted seasons, we look forward to welcoming audiences back this summer for eight glorious weeks of music making.’

Every concert will be broadcast live on BBC Radio 3 and available on BBC Sounds, and 22 Proms are broadcast on BBC television and BBC iPlayer, including the First Night and Last Night Of The Proms.

The BBC Proms will run from July 15 to September 10. Booking begins at 9am on Saturday, May 21 via this link