Haunting images have revealed the movements on a father-of-four in the days before he is alleged to have ploughed into Muslim worshippers near a mosque.

Darren Osborne is accused of killing Makram Ali and injuring several others after his hired van mounted a pavement near in Finsbury Park, north London, on June 19.

Police have now released videos showing Osborne in the lead-up to the incident, with one revealing the moment injured pedestrians rushed to pin Osborne down.

More footage taken from a pub which Osborne is said to have been ‘preaching racial hate’ shows him composing a letter to parliament, two days before going to London.

He is seen writing on paper as he sits at a table, before heading back to the bar, where he is later ushered away by the landlord. 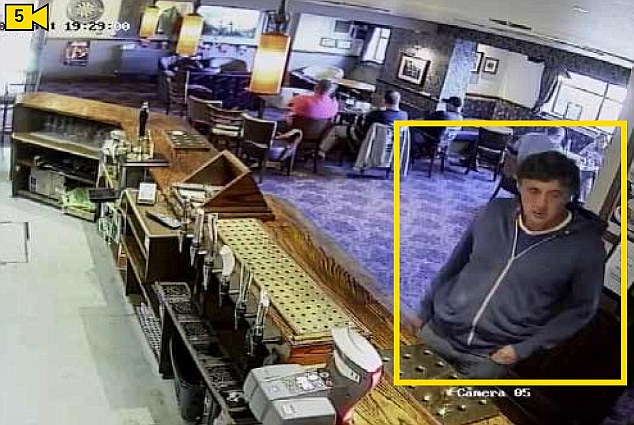 More footage taken from a pub which Osborne is said to have been ‘preaching racial hate’ shows him composed a letter to parliament, two days before going to London

Jurors then saw footage of victim Makram Ali collapsing shortly before a van drives into the group which had flocked to his aid.

In the footage, a white van turns sharply left, mounts the curb and ploughs into the group of people, some of which later spill onto the nearby bus lane.

Photographs released today also showed him renting the hire van from a company near his home in Cardiff.

Woolwich Crown Court today heard how the 48-year-old had received messages from far-right parties in the days and weeks before the incident. 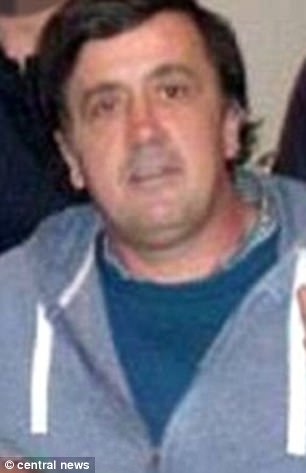 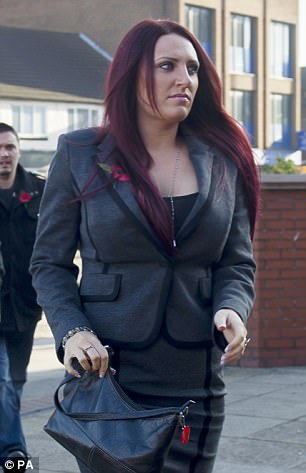 Darren Osborne is accused of a van attack on a group of Muslims in Finsbury Park, killing one. A court heard today he received a message from Britain First deputy Jayda Frasen (right)

Jurors were taken through a timeline of internet activity on two iPhones and Osborne’s daughter’s iPad, which were seized from his address.

In the two weeks before the incident, he carried out searches on Google into Britain First’s deputy leader Jayda Fransen, and its leader Paul Golding, including looking at their Twitter accounts, the court heard.

Britain First were described in court as a ‘far-right, ultra nationalist’ organisation.

Osborne received an email from Twitter on June 3 to complete his account, and a message from Jayda Fransen the same day, the court heard. 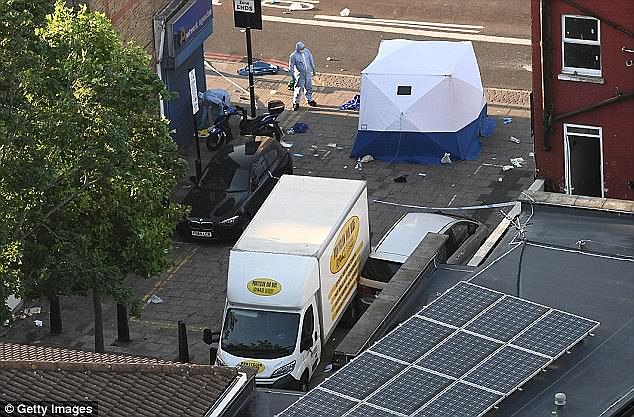 ‘Hot on the heels of receiving that message from Jayda Fransen on Twitter, there is the London Bridge, Borough Market terrorist attack.’

On June 4, he searched for Tommy Robinson, the co-founder and former spokesman of the English Defence League, Woolwich Crown Court was told. 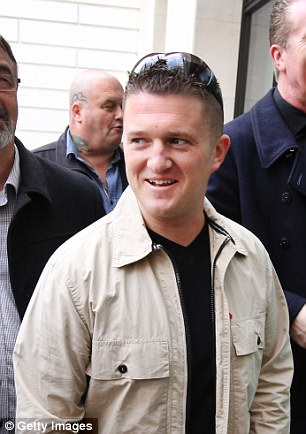 Osborne also received a message from former EDL leader Tommy Robinson in the build-up to the alleged attack, a court heard

He also searched for Jayda Fransen, including her tweet about the London Bridge attack, as well as researching Mr Golding on ‘similar topics’.

Articles about Fusilier Lee Rigby’s murder and the Manchester bombing had also been looked at.

Two days later, there was material accessed about Muslims apparently celebrating an attack, and searches about about Islamic State supporters celebrating the Manchester attack online.

He also searched for Alex Jones and his website Infowars, described as a ‘conspiracy theory and fake news website’, the court was told.

That night, there was a search for ‘which party wants to bring back the death penalty’.

Other topics searched were about Rochdale, including its mayor, local MPs and MEPs, and its former MP Simon Danczuk.

Osborne later received a message in the name of Tommy Robinson encouraging him to take part in a rally in Manchester on June 11, it was said. 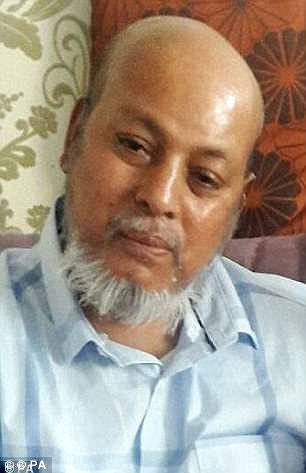 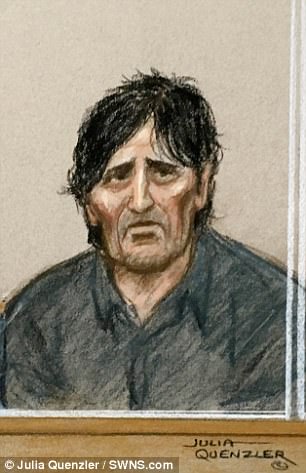 Makram Ali was killed in the incident. Osborne, pictured in a court sketch, denies murder

The build-up to the Finsbury Park ‘attack’

May 16 – Osborne watches Three Girls, a BBC drama about grooming in Rochdale. His ex-partner said the programme was a catalyst for him becoming ‘obsessed’ with Muslims.

June 3 – Osborne set up his Twitter account and on the same day he received a direct message from Jayda Fransen.

June 6 – He searched for ‘which party wants to bring back the death penalty’.

June 9 – Osborne received an email alert from ex-EDL leader Robinson, now a commentator for The Rebel.

June 14 – He received another email from Robinson about the case of a woman in Sunderland who Robinson claims was ‘raped and beaten by middle eastern migrants’.

June 17 – Osborne searched online for Tommy Robinson again. He picks up the van he used in the attack.

June 19 – Osborne alleged drove onto a pavement in Finsbury Park. Mr Ali died from multiple injuries at the scene at 1.04am.

The email in the name of Tommy Robinson referred to the Manchester Arena suicide bombing on May 22, stating: ‘What Salman Abedi did isn’t the beginning, it won’t be the end.

‘There’s a nation within a nation forming. It’s a nation built on hatred, violence, and Islam.

‘It’s now been left to us, the ordinary people of the UK, to stand against hatred, and with one voice to say no more.

‘That’s why on Sunday the 11th of June, we will stand together in Manchester in opposition to hate. We will rally to demand action. We will make ourselves impossible to ignore.’

He also received a message on June 14 asking, ‘Darren, will you help me get justice’, about a campaign for a woman said to have been raped ‘by a gang of men’ in Sunderland. Both ended ‘yours truly, Tommy Robinson’, the court heard.

There were further searches for Tommy Robinson on June 17.

This included a tweet from Mr Robinson replying to someone, saying, ‘you anarchist why didn’t you point fingers after Manchester. Instead celebrities said let’s love each other’.

Another of his tweets referred to ‘anger when the Muslims bomb our kids, we were told not to look back in anger’, the court heard.

Osborne also searched for Mayor of London Sadiq Khan, and his comment about being prepared for terror attacks ‘part and parcel of living in a major city’, it was said. 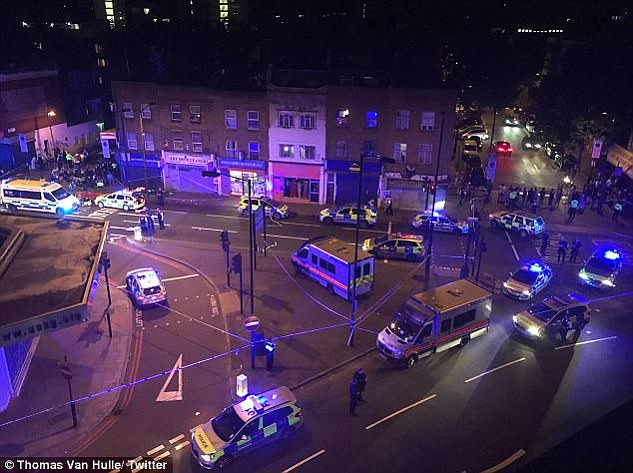 He searched for Labour leader Jeremy Corbyn, and references to ‘Mr Corbyn’s low political ploy of playing on the anger of Grenfell Tower victims’, the court heard.

Before visiting the Hollybush pub on June 17, he searched for Mr Khan and Mr Robinson.

This included looking at a tweet by Mr Robinson saying, ‘where was the day of rage after the terrorist attacks? All I saw was lighting candles’.

‘Attacker’ ranted in pub in Cardiff before leaving for London, jury told

The court heard Osborne spoke loudly about terrorism and Muslims at the Hollybush Pub in Pentwyn, near Cardiff, on the evening of June 17, the day before he allegedly travelled to London.

Soldier Callum Spence said Osborne made comments including ‘Muslims are all terrorists’, ‘I’m going to kill all Muslims’ and that he would ‘take it into his own hands’.

Mr Spence, a Royal Engineer, told the court: ‘He was pretty mumbling, but I heard him saying “all our families are going to be Muslim. They are all going to be terrorists”. Things like that.’ 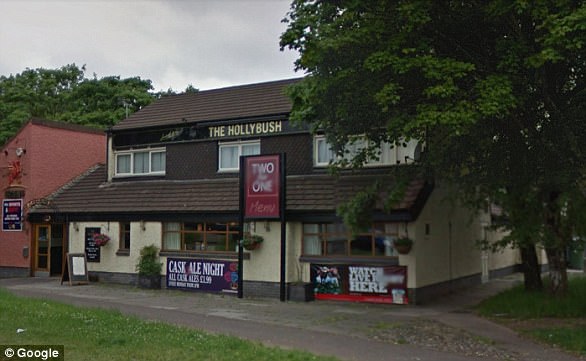 The defendant also claimed to be a soldier but did not know the phonetic alphabet used by the military, and was ‘flinging his arms around’, Mr Spence added.

In a statement read to the jury, Angelo Lamberti, assistant manager of the pub, said Osborne was asked by Mr Spence what regiment he belonged to.

He said: ‘I heard the odd male tell the soldier that he was also a soldier. The soldier asked him what regiment he was in, to which he replied, “you will find out tomorrow”.’

Osborne, who was asked to leave the Hollybush, is also said to have written a letter to Parliament while at the pub and to have told a member of staff, ‘there is a lot of raping and pillaging out there’.