Fiona Hill: People who downplay 1/6 should talk to ‘immigrants like myself who came from war zones’

Fiona Hill said Sunday all ‘immigrants like myself who came from war zones’ see the danger in events like the January 6 Capitol riot – but the former Trump adviser is from the United Kingdom.

When asked about people calling it an overreaction that Chairman of the Joint Chiefs of Staff Mark Milley called the attack a coup, Hill said they should speak to immigrants from countries who have experienced similar events.

‘Well, people are saying that because they don’t have any personal experience of these kinds of events,’ she told CBS News’ Face the Nation on Sunday morning.

‘I can certainly tell you as an immigrant, as somebody who came to the United States in 1989 against the backdrop of the crumbling of the Berlin Wall and the backdrop of the end of the Cold War,’ Hill said, ‘I also know immigrants like myself who came from war zones, who came from places like the former Yugoslavia or places like Sri Lanka, which is being pulled apart by civil war and conflict. Afghanistan, Syria, you know, you name it.’

‘All of the people that I know who are immigrants are looking around and saying, ‘Can’t people see this?’ she continued.

‘We’ve come from war torn societies,’ Hill said. ‘All of the hallmarks are here.’

‘So perhaps, you know, Americans should talk to some of their neighbors who’ve come from somewhere else and who came to the United States to flee just this kind of occurrence and have them tell them what their personal experience was.’

Hill was born and raised in England and came to America in the early 1990s for graduate school and in the late 1990s earned her doctorate at Harvard. She became a U.S. citizen in 2002.

Since her birth in 1965, Hill’s home country has not experienced any war within its borders.

Fiona Hill, a British-born former Trump national security aide, said Sunday that ‘immigrants like myself who came from war zones’ see the writing on the wall of the dangers of the January 6 attack 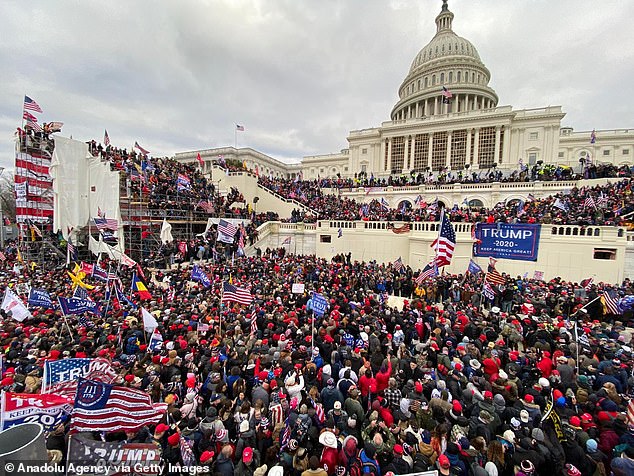 She said the events are similar to leads up of a coup in other war-torn countries, which she suggested she immigrated from despite being born and raised in England

She still insisted that Americans should take the events on January 6 as a ‘dress rehearsal’ for an attempted coup, which she claims could happen in 2022 or 2024.

Hill’s comments on Sunday come as she promotes her new memoir ‘There Is Nothing for You Here: Finding Opportunity in the 21st Century’, which was released this month.

During her interview with CBS anchor Margaret Brennan, Hill noted that former Vice President Mike Pence contributed to the perspective of that day when he downplayed the attack where some rioters called for him to be lynched.

On January 6 a Stop the Steal rally outside of the U.S. Capitol turned to chaos when thousands of Trump supporters stormed the building and broke through the doors, sending lawmakers into lockdown.

Among many analysts sought for their assessment of the January 6, 2021 assault on the capitol, Hill stated to The Daily Beast,

‘The president was trying to stage a coup,’ she said in January when assessing the attack. ‘There was little chance of it happening, but there was enough chance that the former defense secretaries had to put out that letter, which was the final nail through that effort. They prevented the military from being involved in any coup attempt. But instead, Trump tried to incite it himself, this could have turned into a full-blown coup had he had any of those key institutions following him.’

‘Just because it failed or didn’t succeed doesn’t mean it wasn’t real,’ she added at the time.

Hill was a national intelligence analyst of Russia and Eurasia at the National Intelligence Council from 2006 to 2009 – serving under both President George W. Bush and Barack Obama.

In April 2017, three months after Donald Trump became president, Hill was appointed deputy assistant to the president and senior director for European and Russian affairs on his National Security Council.

Hill was set to leave the White House to return to Brookings Institute in April 2019, but was convinced to stay until mid-July by then-National Security Advisor John Bolton, with whom she had developed a close professional relationship.

On July 15 – just 10 days before the infamous Trump-Zelensky phone call – Hill left her post. She was replaced by Tim Morrison.

Hill became a key witness in the first impeachment against Trump. In October 2019 she appeared in response to a subpoena and testified for 10 hours in a closed-door deposition before a congressional committee and on November 21, 2019 was publicly questioned.

Republicans have repeatedly questioned the credibility of her testimony.